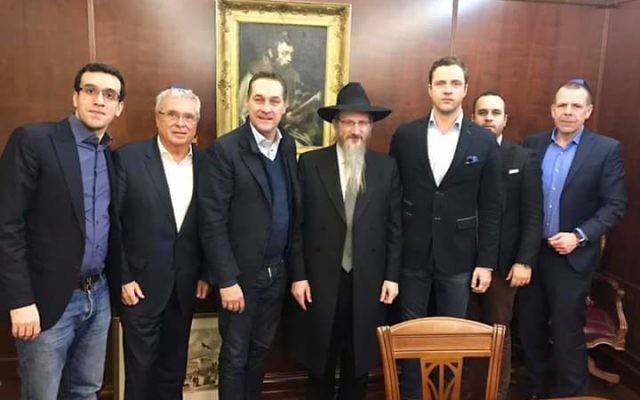 The Chief Rabbi of Russia has been criticised after holding private talks with the head of Austria’s far right Freedom Party this week, Jewish News can reveal.

Rabbi Berel Lazar agreed to the request to meet a delegation led by Heinz-Christian Strache at his office in Moscow, just two weeks after Jewish leaders breathed a sigh of relief when his party’s candidate suffered a narrow defeat in the country’s presidential election.

A spokesman for the Federation of Jewish Communities of Russia (FJCR), which the Chabad rabbi heads, insisted the meeting did not represent a hechsher [kosher stamp] or “solidarity” but was seen as a “duty”. He told the Jewish News: “Rabbi Lazar is ready to meet everyone and have dialogue with everyone. He has met during career with Russian nationalists and seen good results. We believe talks are much better than pogroms.”

But the decision to hold the meeting was branded “astonishing, bizarre, worrisome” by Vienna-based Rabbi Schlomo Hofmeister. He said: “Of course it is a hechsher; by meeting them he implies they are kosher. Furthermore is the breach of a taboo. The simple question is why and what for? If the intention is to gain any sort of gratefulness or political favouritism from fascists, then it is simply disgusting.”

Arie Folger, the chief rabbi of Vienna, said he is sure he is “motivated by a desire to promote tolerance and understanding for Jews” but he couldn’t have been well informed about his guest. He claimed the Freedom Party is agitating against shechita in the state of Carinthia and a Chabad rabbi in Vienna urged followers to vote against the party this month.

“It may be that Mr Strache is more open to Jews and Judaism but his party continues to harbour people who really don’t like us, as well as people who while they might not dislike us, nonetheless see us as fair collateral damage in their opposition to Muslims.”

An FJCR spokesman said the meeting’s agenda was set by the Austrians “who asked the questions not the other way around”, confirming the rabbi hadn’t challenged him on the party’s position on immigration. He said the delegation were keen to stress the party was not anti-Semitic and were friends of Israel, while the rabbi stressed “he believes people have to live together”.

It comes after European Jewish Congress president Moshe Kantor said the election of Freedom party hopeful Norbert Hofer would have spelt “disaster for Europe as it might have given a tailwind for other similar extremists across the continent, like the National Front leader Marine Le Pen”. Le Pen congratulated the defeated candidate after his conceded defeat, suggesting they would triumph in the next legislative elections. Strase revealed this week he had signed a cooperation agreement with Russia’s ruling party during his visit to Moscow.