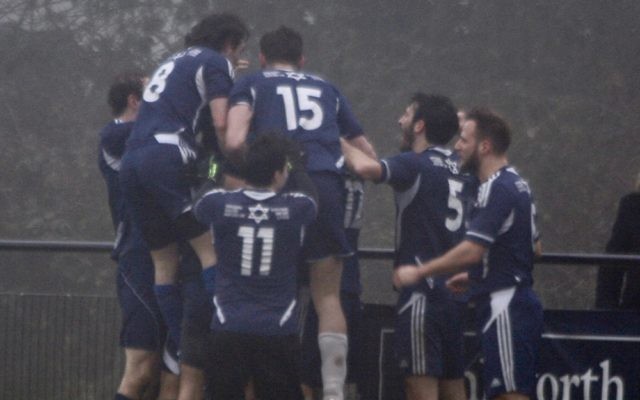 Oakwood joint-manager Dan Kristall says his side “are in the mix” for the title having seen them claim an injury time winner against Hendon.

Beating their title rivals for the second time in as many weeks, the O’s extended their lead at the top of the table to four points, though Kristall is refusing to get carried away.

He said: “We still have to play Redbridge, Lions, Team and Raiders so are fully aware of how difficult it will be to win the title from this position. The other teams also have tough run-ins with Redbridge and Hendon still yet to face each other, it all makes for an exciting end to the league season. We know full well we’ve won nothing yet but we’ve put ourselves right in the mix.

“It was a massive win and we will enjoy these wins, but the games are coming thick and fast. We want to make sure it contributes to something in May. The boys are determined to keep going and keep winning. Seven straight wins in this league is a fabulous achievement and we are building up momentum for a very tough run in.

“There is loads of football still to play and all three teams are still in with a very good chance of winning the league. We just have to focus on winning our games. The rest will take care of itself.”

Kyle Bentwood fired them ahead midway through the first half, though the game seemed to be heading for a point after Moses Seitler equalised from close-range. But there was to be time for one final dramatic twist as in the third minute of injury time, hesitancy at the back allowed Leor Sidle to nip in and sweep the ball home to set of wild celebrations from the Oakwood management on the touchline.

Kristall said: “The celebrations at the end reflected an incredible achievement. To beat unbeaten Hendon twice in a week is not easy. We had to be organised, defend well and take our chances when they came and we achieved all three of those.

“It was a great sign of character and determination. Our boys were knackered by the end but never gave in. We defended superbly and created all of the meaningful chances in the match. Last minute goals aren’t lucky, they are a sign of a team’s character and team spirit.”
Believing they were worthy of the win, he said: “We deserved it 100 percent. We were the better side in the first half. In the second half, Hendon came at us but we were comfortable and looked dangerous throughout on the break. Hendon scored with their only real chance but what was most pleasing is that after the equaliser we stepped it up and had all the best chances to win.

“We would have taken a draw – as we know David would because that’s what he was telling his players – but we are delighted with the win. We’ve suffered ourselves at the death in big games, so it feels great to be on the right side this time. “

Hendon manager David Garbacz said the victory ‘was tough to take’. He said: “It was the cruellest, bitterest way to lose such an important game in which I’m sure Rik and Dan would agree that a draw would have been a fair result. I left the pitch yesterday with the feeling that someone had broken into our home and had stolen a sentimental family heirloom in broad daylight.

“As with last week and despite talking about it pre-game, we started off a bit too slowly for my liking and allowed them to dictate the early exchanges. However, from about the 30th minute onwards, we put in a good fighting battling display, got ourselves back into the game and looked the likely winners only to be dealt the cruellest of bitter blows at the end. We were possibly lacking a bit of our usual quality in the final third which was disappointing, but Oakwood are a great team defensively and are hard to break down.

“However the truth is – the winning goal was all our fault. We deal with that situation 99 times out of 100, but for some inexplicable reason Alex and Arthur were each waiting for the other one to come, and in nipped their forward to take advantage of the hesitancy. I felt so bad for the whole team – we had fought back well in the second half and had looked the likely winners, but even once it didn’t look like we would win the game, we still knew a draw would be fine. Overall I was proud of the effort but ultimately it was all about the final result.

“Congratulations to Oakwood – to win both these matches takes some doing and clearly they had the better mental strength than us to come away with the points.”