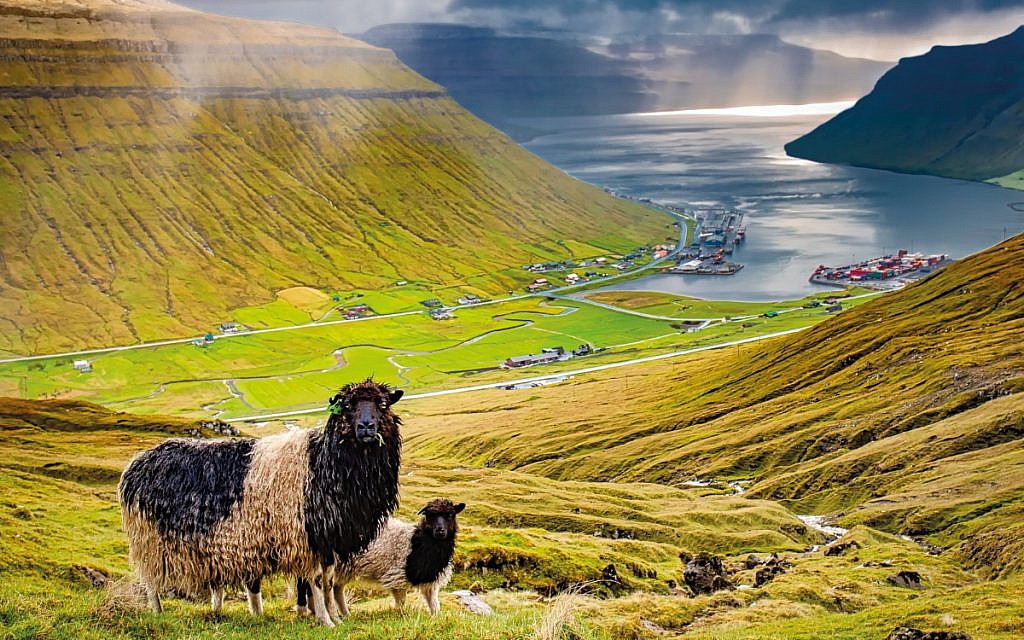 Natural beauty of the Faroe Islands. Photo by Tom Glancz

You can drink the tap water.  In fact, it’s probably the best water in the world” assured my hotel brochure – and I was inclined to agree.

Here in the Faroe Islands, an archipelago of 18 stunningly beautiful islands situated in the Atlantic Gulf Stream between Scotland and Iceland, the water is indeed pure.

Combined with the austere beauty of this place, waterfalls, abundant bird life, the freshest food, brightly-painted houses with turf roofs and fabulous Wi-Fi connections, make for a striking place to spend a holiday.

Apart from hearing a mention on the BBC shipping forecast, I didn’t really know much about the Faroes before my visit.

I certainly hadn’t realised they are a self-governing region of the Kingdom of Denmark – although unlike Denmark, they are not part of the EU – and despite being just an hour’s flight from Edinburgh, people rarely think of coming here for a long weekend.

This relative anonymity may be short lived as they were recently dubbed, “the world’s favourite unspoiled island destination” by experts at National Geographic Traveller.

Tórshavn, the capital, is situated on the largest island of Streymoy and has a population of 20,000, so approximately two out of every five Faroes Islanders call it home.

Our guide, Ingigerð is showing us around Tórshavn.  Her English is almost perfect, although the language here is Faroese, a Viking tongue, brought by the first settlers in AD800. 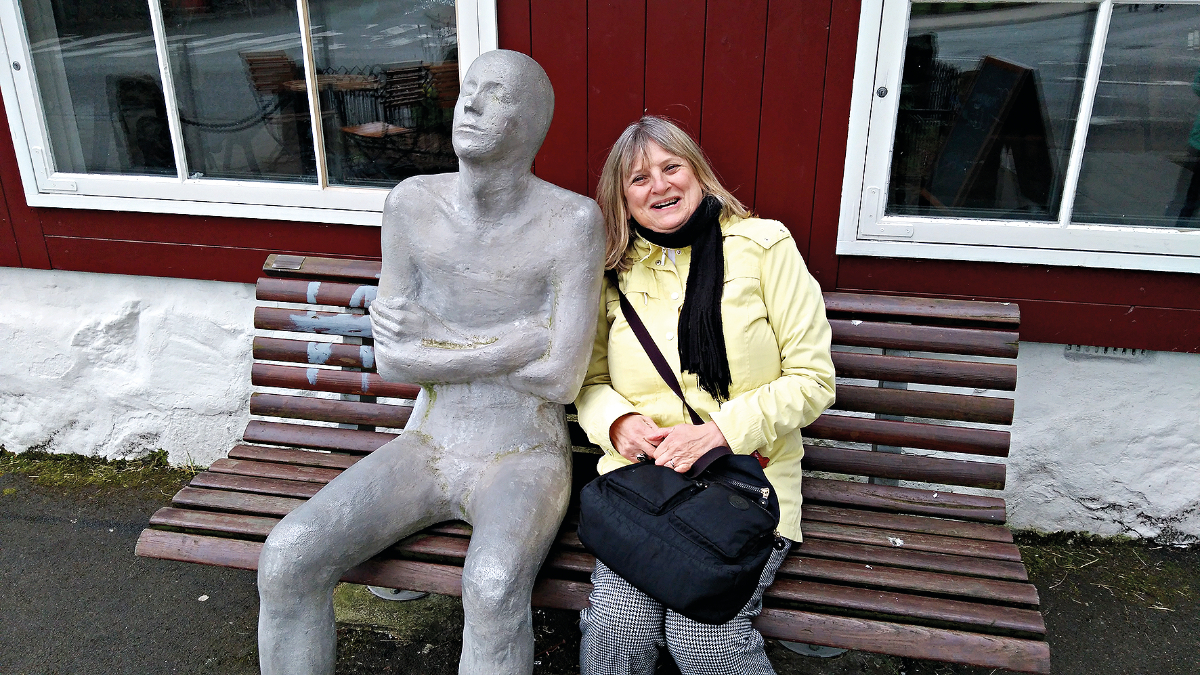 Lucy in Torshavn, capital of the Faroe Islands

A hundred years later, on the precise stony promontory we are standing on, is where the Viking legislature first met.  So this spot is the place of the second oldest parliament in the whole world.  Ingigerð was even able to point out a Viking sundial engraved into the rock.  Even today, the area is the seat of the Faroese government and is called “Tinganes”, which means, “parliament point”.

Tórshavn’s city centre is small and easily accessible on foot, with shops, museums, bars and excellent eateries.   The Faroese even have their own Michelin star restaurant, Koks, situated just outside the town, with fabulous views and booked up many months in advance.

In a land with 700 miles of coastline and only one village that is not on the coast, it’s no surprise that the islanders have always depended on the ocean for sustenance, mainly in the form of white fish and salmon.

Barbara’s Fish House tucked away between the rocks and turf-roofed houses of Tinganes are a good place to sample it. 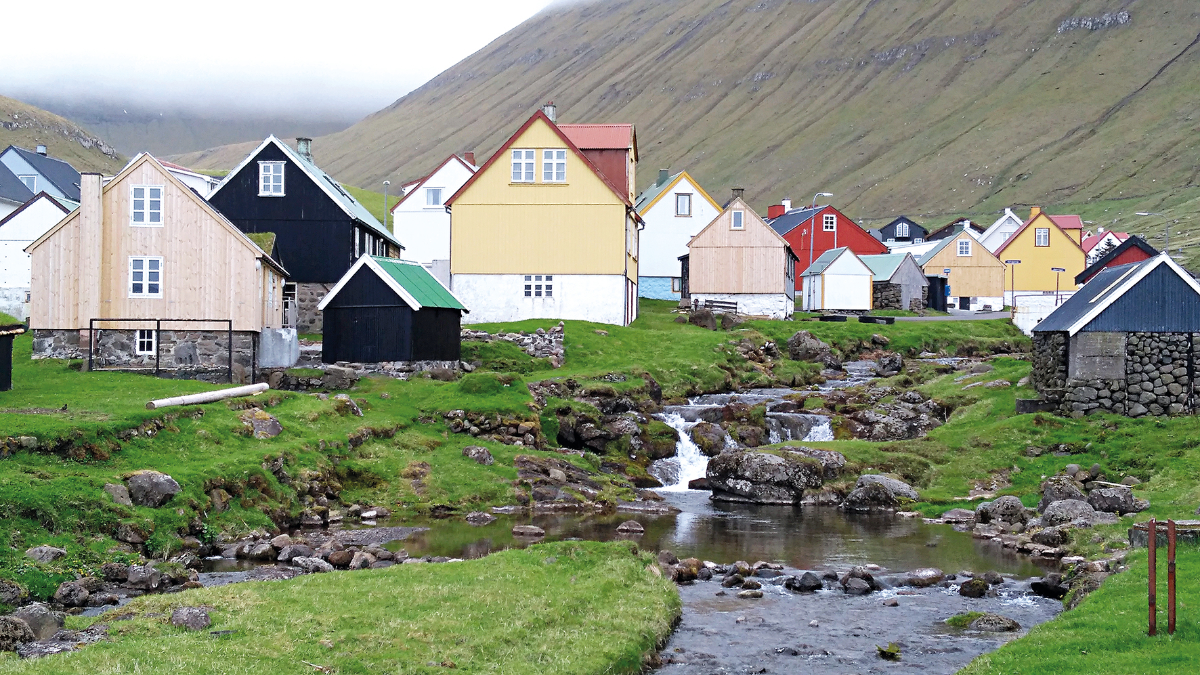 Brightly-painted houses in the village of Gjogv

Elsewhere, lamb is a common dish too, as 80,000 sheep live here, all different breeds, which nibble the vegetation to such an extent that the landscape is almost devoid of trees.

It’s also quite common to see people quietly relaxing by knitting at a fast pace, usually jumpers, as illustrated in the Danish drama, The Killing, where Sarah Lund was never seen without her trendy Faroese sweater. These woollen products are for sale throughout the islands.

Worth a visit is the National Art Gallery displaying the work of local artists, as well as an intriguing room lined with glass and mirrors entitled, The Deep Blue, designed to express the depth and infinity of sky and ocean.

Just 15 minutes’ drive from the capital is Kirkjubøur.  Here can be seen the ruins of Magnus Cathedral from around 1300, and Saint Olva’s Church from the 12th Century.

Next door is what’s thought to be the oldest wooden house still standing in Europe, built from Danish driftwood in the 11th century.

The most popular excursion is to catch a boat from Vestmanna on the west of Streymoy to explore the bird cliffs.  Gunnar, our captain, took us on an exhilarating trip, skilfully guiding us between the rocks to see the nests and habitats of puffins, guillemots, fulmars, kittiwakes and oyster catchers.

Another way to get a true flavour of the Faroes is to visit one of the smaller, more isolated islands.  We drove to Gamlurætt, caught the ferry to Sandoy and then went through choppy waters to Skúvoy where the ferryman helped us to jump out just at the right moment when the boat was level with the land.

Just 15 people live here and one of them, Tummas Frank Joensen, greeted us, and led the way to his comfortable home where he treated us to “heimablídni” (Faroese home dining), which included an utterly delicious soup made with white fish, peaches and cream.

A hike afterwards passed the grave of Sigmundur Brestisson (961–1005), a Faroese Viking chieftain, and the first Viking to be converted to Christianity.

Religion is an important part of Faroese life.  The established church is Evangelical-Lutheran, but there are also smaller Protestant groups, a few Catholics,  Jehovah’s Witnesses  and according to the 2011 census, 12 Jewish people too!

Lucy travelled to Stansted with National Express Coaches and flew to the Faroe islands with Atlantic Airways, which flies twice weekly from Edinburgh, May to January. Lucy stayed in Hotel 62°N, (62nhotel.fo), and Hotel Skalavik, (hotelskalavik.com). For more details, see visitfaroeislands.com