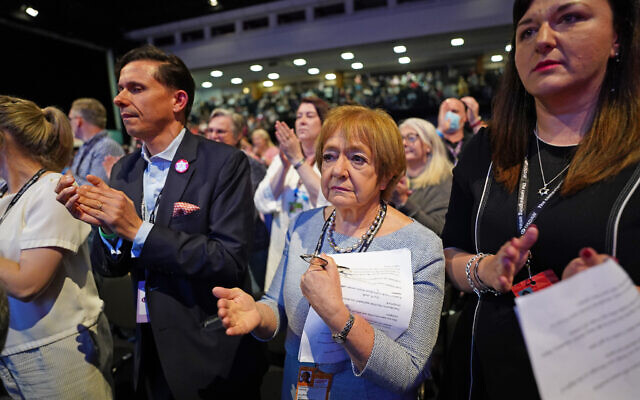 Nearly three-quarters of delegates at Labour Party conference have endorsed a new independent complaints process prompted by the Equality and Human Rights Commission (EHRC) report into antisemitism the party.

But in a swipe at the remaining 24 per cent of delegates who failed to support the changes that the party were ordered to adopt by the watchdog, the Jewish Labour Movement’s vice-chair Ruth Smeeth branded the rebels as “racist.”

The changes to disciplinary procedures will affect the handling of complaints about antisemitism, Islamophobia, other forms of racism, sexual harassment, and discrimination.

Keir Starmer said the approval of the moves represented a “decisive and important day in the history of the Labour Party.”

He added:”I promised to tackle antisemitism in our party. We’ve now closed the door on a shameful chapter in our history. I want to acknowledge the courage of all the people who spoke up against it.”

After Labour’s ruling NEC had backed the moves earlier this month, under Labour’s rule book, they needed final approval at party conference.

When the results emerged on Sunday evening 73.6 per cent of delegates voted in favour of the changes, with 26 per cent opposing the EHRC’s recommendations.

And in an often emotional debate on the Brighton Centre conference floor a stream of Jewish Labour figures stepped up to speak in favour of the changes to disciplinary procedures, in a move aimed at repairing the damage of the Jeremy Corbyn era.

While former Stoke on Trent North MP Smeeth, and JLM chair Dame Margaret Hodge drew standing ovations with their speeches – it was delegates from CLPs across the country, including non-Jewish and Muslim party members who really hit home with their pleas for the moves to be backed.

Jewish CLP members from Hove and Enfield Southgate told of their struggles to remain in the party during the Corbyn era due to rampant antisemitism and the failure to stamp it out.

A party member from Vauxhall said as a Muslim he was proud to support the measures.

Meanwhile a speaker from Harrow West CLP said it was to Labour’s shame that there was a need to debate anti-racist measures at all.

Heckles from supporters of the Jewish Voice For Labour group were quickly drowned out of the arena.

One Labour councillor Elaine McDonald was told she was “in the wrong party” and told to “sit down” as she attempted to express solidarity with Leah Levane, the national co-chair of JVL, was was expelled from the party.

To applause as she spoke former Jewish MP Smeeth, who later said she was nervous to enter the hall to speak, told the floor:“If you’re an anti-racist, if you believe in equality and if you want the scourge of antisemitism to be removed from our party, then you have to vote for these rule changes.”

She had earlier told a fringe event hosted by the Labour First group that anyone not backing the EHRC was “a racist.”

She added:”“Look yourself in the mirror and ask what party you should be in – because it isn’t ours”

In a statement Board of Deputies President Marie van der Zyl said:” The result shows that Labour is on its way to banishing the antisemitism spectre that has hung over it for the past few years.

“While there is clearly still work to do, Labour must continue to demonstrate that it will not allow British Jews to feel marginalised in the Party again.”

“An independent disciplinary system was mandated by the Equality and Human Rights Commission following its report that the Party broke equalities law and discriminated against its Jewish members. It’s essential if Labour is to rebuild its relationship with the Jewish community and its wider reputation as a tolerant, anti-racist party.

“From day one Keir Starmer has shown the real leadership Jeremy Corbyn never did, in taking concrete steps to tackle anti-Jewish racism, including supporting JLM in delivering training.

“But passing this rule change alone is not enough to detoxify party culture. The reaction by some both inside and outside Conference today shows there is still a huge amount of work to do for Labour to become a truly safe and welcome space for Jewish people.”

The changes had been opposed by Momentum, who used the claim that were serious concerns about the power the general secretary would have over an independent process to justify their action.

Other delegates claimed they had not been given enough time to study the proposals.

A Momentum spokesperson said: “The proposals we are voting on today are a flawed interpretation of the report. The EHRC report itself described the general secretary’s office as a political organ – so review boards and complaints panels which are accountable to the general secretary cannot, by definition, be independent.”

Shabana Mahmood, the chair of Labour’s national executive committee disciplinary panel,  said she had “watched my fellow members of my Labour family have their hearts broken because of hatred they have seen … it has been a shameful period in our history.

“Today we decisively turn the page and we apologise unreservedly to our Jewish members and to the wider community and we resolve that no community will ever go through this pain again.”