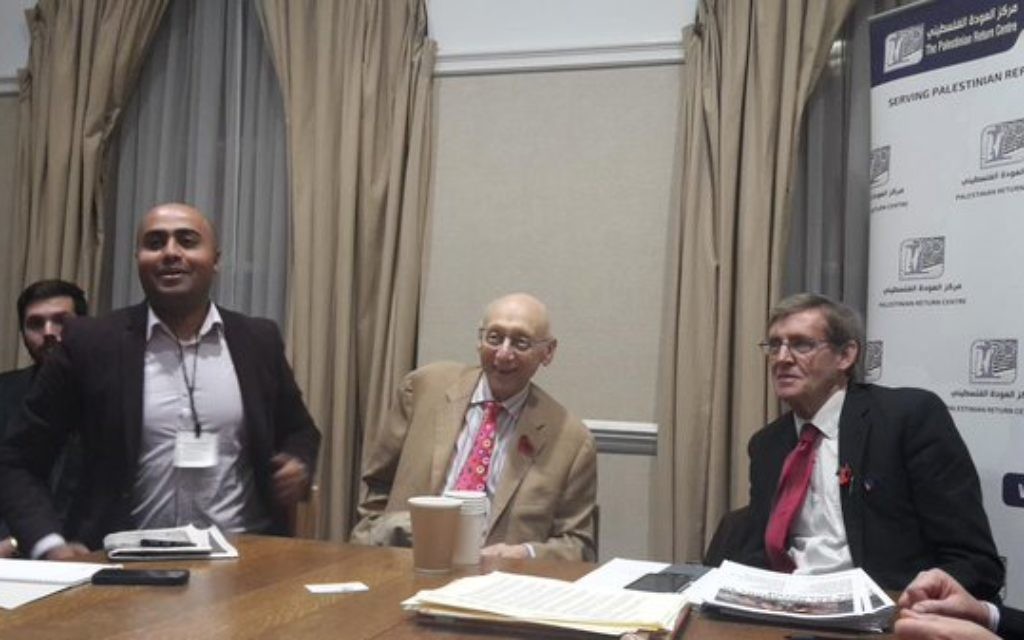 Kaufman (centre) at the event in question. (Source: @prclondon on Twitter)

Kaufman (centre) at the event in question. (Source: @prclondon on Twitter)

Speaking at an event organised by the Palestine Return Centre in London, Kaufman – who, as the longest-serving MP, carried the honourary title ‘Father of the House’ – was responding to a question on “why this Government’s policy has got harder and harder, and more and more pro-Israeli”.

He continued: “There is now a big group of Conservative MPs who are pro-Israel whatever, and they’re not interested in what the Israeli government does. Palestinians are living a repressed life, liable to be shot at any time.”

Citing a letter from “a friend” in East Jerusalem, Kaufman spent several minutes making the point that Israeli authorities were “fabricating” stories of stabbings. It left community leaders outraged, with Simon Johnson, the chief executive of the Jewish Leadership Council calling for an apology.

“For the Father of the House to make comments that refer to all the old-fashioned anti-Semitic tropes is nothing short of disgraceful,” he said. “I am personally offended that an MP representing the city where I was born should articulate such views as this. Sir Gerald owes the Jewish community a significant apology.”

Asked whether the Commons or the Labour Party should take action against Kaufman, Johnson said: “He holds the title ‘Father of the House,’ therefore this should be a matter for the whole House.”

Board of Deputies’ President Jonathan Arkush said: “We condemn Sir Gerald’s outrageous comments. We challenge him to travel to Israel immediately to ride around with the emergency services and to see for himself whether it is possible to fabricate knife attacks.

He added: “We invite the Labour Party to initiate disciplinary proceedings to investigate his disgraceful words.”

Pro-Israel blogger David Collier, who was at the event, said: “All the names on the invitation were hostile to Israel, [so] I was hoping for a little excitement… but even I didn’t expect global Jewish conspiracy theories.”

Organisers and fellow speakers immediately distanced themselves from the comments, with a spokesman for the PRC saying Sir Gerald was “representing his own view… We did not have any control over what he said”.

Joan Ryan, chair of LFI, commented: “Gerald Kaufman’s remarks were extremely irresponsible, totally inaccurate and highly offensive and do nothing to advance the cause of peace and coexistence.”

Labour MP Ivan Lewis, who is Jewish, tweeted following the event: “Gerald Kaufman should withdraw his inappropriate and unacceptable comments at the earliest opportunity.”

A party spokesman declined to confirm whether disciplinary proceedings would be issued, saying only: “These views do not reflect the views of the Labour Party.”