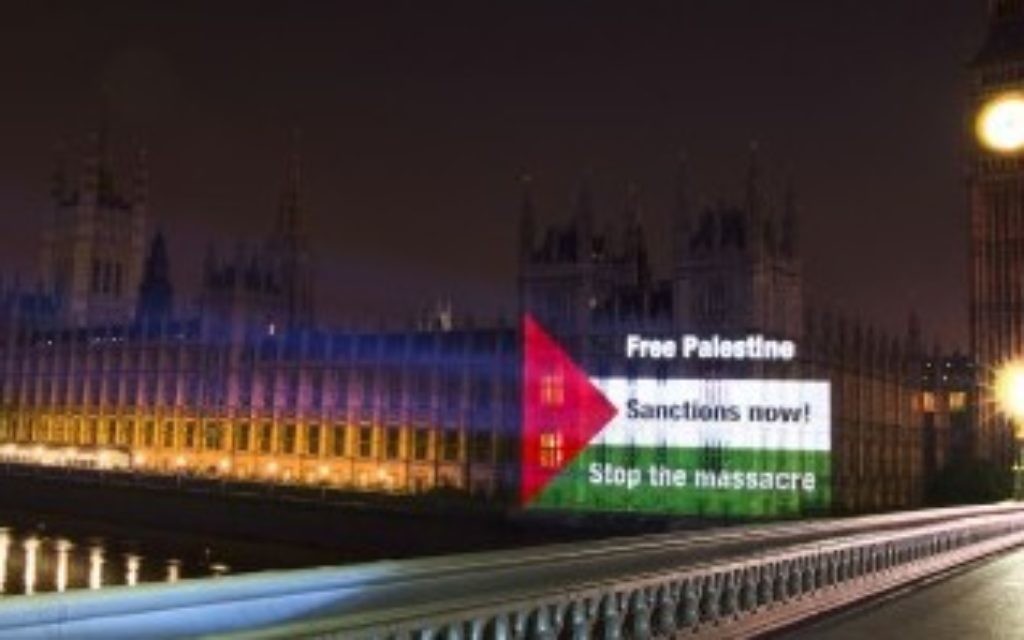 The Palestine Solidarity Campaign project an image onto the Houses of Parliament.

Labour has thrown its weight behind a motion that calls for the UK Government to recognise a Palestinian state, despite concerns it doesn’t make recognition dependent on a peace deal and anger from senior party figures who feel it rewrites long-standing party policy.

Several shadow ministers are set to defy instructions to back an amended motion that is due to be debated in the House of Commons on Monday, significantly increasing the chances of a ‘yes’ vote with likely support from large numbers of Lib Dem and some Tory backbenchers. Although not binding on the Government, it would mark the first such recognition by the British Parliament.

Government ministers from the Conservatives and Liberal Democrats are expected to abstain, while a spokesman for the latter confirmed to the Jewish News that its backbenchers would have a free vote.

The original motion, proposed by prominent critics of Israel, said: “That this House believes that the Government should recognise the state of Palestine alongside the state of Israel.” The additional words “as a contribution to securing a negotiated two state solution” have now been introduced in an amendment from Labour MPs including former foreign secretary Jack Straw – and the full text has been backed by the party’s leadership to the anger of some members of the party’s front bench team.

While Israel’s Labor Party urged politicians from its British counterpart not to support the motion – warning that unilateral moves do nothing to advance peace – shadow foreign secretary Douglas Alexander insisted that the motion “does not commit Labour to immediate recognition of Palestine or mandate the UK government to immediately bilaterally recognise the State of Palestine”. He claimed its support reaffirms support for “the principle” of recognising ‎statehood.

“‎The timing and the mechanism by which Palestinian recognition takes place will continue to be matter decided by an incoming Labour Government. We have made clear previously that steps taken by individual governments outside of a wider international process won’t contribute to meaningful progress in negotiations towards a two state solution.”

Labour backed the 2011 bid for upgraded Palestinian status at the United Nations. And while stressing that the conflict would “ultimately” be solved by both sides negotiating, Alexander reiterated his belief that UN recognition would strengthen moderates and help rekindle the hope that there’s a “credible route to a viable Palestinian state and a secure Israel achieved by negotiations”.

Pro-Israel organisations including We Believe In Israel and the Zionist Federation have contacted every MP urging them to instead support another amendment tabled by supporters of the Jewish state saying recognition should come only “on the conclusion of successful negotiations”.

But Alexander argued that the second phase of the 2002 roadmap to peace said that the international community would promote recognition including through possible membership of the UN.

Several shadow ministers and shadow cabinet ministers are expected to refuse to back the motion either by abstaining or deliberately staying away from the chamber. One MP told the Jewish News: Its’ a change of party policy that’s being presented as otherwise.”

A Labour source, who suggested Alexander had led on the decision to whip the vote despite direct appeals from senior party figures not to, said there was “significant” anger that MP’s were in a situation where they were told to back a motion proposed by an politician with Morris’ record. The MP is himself no stranger to defying the party whip and who recently asked in the House if Britons returning from serving in the IDF would be treated in the same way as those returning from fighting in Syria. It’s also understood that some see Alexander’s position in backing the motion as inconsistent with lng-standing party policy.

In a letter to Labour MPs, Israeli Labor Party general secretry Hilik Bar said he understood why “many of you will want to vote for anything which claims to be a contribution to peace”. But the he added: “But our view in the Israeli Labour Party is that unilateral recognition of Palestinian statehood does nothing to advance this vital cause.

“Over the past three decades every advance for peace – for instance, the treaties between Israel and Egypt and between Israel and Jordan – has come about through genuine negotiation based upon compromise and conciliation. Unilateral and pre-emptive moves, by contrast, have only led to more conflict and violence.” Bar claimed that “unilateral moves simply play into the hands of those on Israel hard right, which wants to suggest that we have no partner for peace, and that the Palestinians do not want to sit down and negotiate with us”.

Jennifer Gerber, director of Labour Friends of Israel, also called for the motion to be rejected, saying unilateral recognition moves us further away from rather than closer to a two-state solution.

Ed Miliband with Benjamin Netanyahu in Israel earlier this year.

She argued that unilteral moves reduce the motivation for the Palestinians to come to the negotiating table and added: “Even if negotiations begin, a recognition of Palestinian statehood before talks start would make a negotiated Israeli-Palestinian resolution to the conflict more difficult.

If the Palestinians have their maximal positions endorsed by the UK and other countries, it will make it harder for them to compromise during negotiations.”

Ahead of news of Straw’s amendment, a letter from the ZF, co-signed by the Jewish Leadership Council, went to every MP urging them not to support the main motion. The ZF’s petition with Israel advocacy UK has also attracted 2000 signatures.

A foreign office spokesman said three weeks ago it reserved the right to bilaterally recognise a Palestinian state “when it can best help bring about peace”.

But they added: “We continue to believe that negotiations towards a two-state solution are the best route to meeting Palestinisan aspirations in reality and on the ground.”

A Conservative Party spokesman said: “As is usual, backbench business is not whipped and members of the government do not take part. That said, the government always pays close attention to the views expressed in parliament.”

The Board of Deputies said in a statement: “The Israeli Government, the Board of Deputies and the vast majority of British Jews support a two state solution, which of course will require recognition of a Palestinian state.  The question is how this is best achieved.

Board of Deputies President speaks at a BoD event

“While recognising the motion before the House as a symbolic statement of intent – with which many supporters of Israel will have sympathy – its likely effect is to retard the negotiations, actually setting back the cause it seeks to promote.

We urge all those that want to demonstrate their support for Palestinian statehood to do so – rather than by supporting this motion – by pressing for the resumption of serious negotiations designed to bring about a just and sustainable settlement for the region based on mutual recognition and respect.”