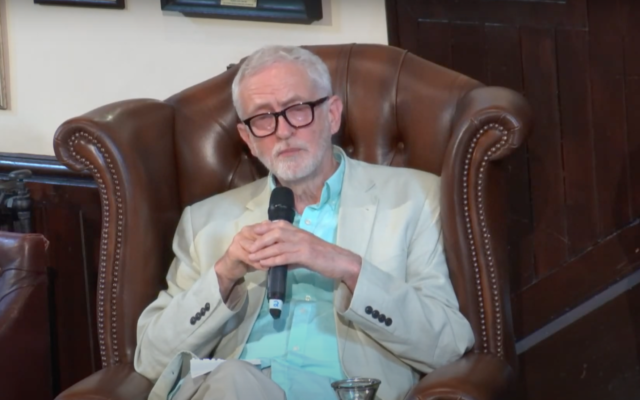 Jeremy Corbyn speaking at the debate

The Labour Party is “looking into” comments made this week by Jeremy Corbyn  after he said that Jewish former MP Luciana Berger “was not hounded out of the party”.

In his latest bid to deny the extent of antisemitism in the party under his watch, Corbyn told a Cambridge Union debate: “Luciana was not hounded out of the party. She unfortunately decided to resign. We gave her all the support she needed and deserved.”

Sources confirmed to  Jewish News that the party is now looking into the comments ahead of a possible formal investigation.

In response to Corbyn’s remarks, which were made at Thursday’s appearance at the debating society, some of his supporters immediately posted abusive messages directed at Berger on social media.

One source described the messages sent to Berger  as “disgusting” and “a direct result of Corbyn’s comments at Cambridge Union.”

Another source said:”Luciana has left politics – it is appalling she is now having to go through this all over again.”

“Jeremy Corbyn has said that Luciana Berger was not hounded out from the Labour Party because of antisemitic abuse.

“This shameful statement speaks volumes. It tells us he never took antisemitism seriously .. Corbyn should be nowhere near the Labour Party.”

Turley said:”Evidence of the racist bullying of Luciana was presented week after week at the Parliamentary Labour Party meetings.

“The great niece of Manny Shinwell would not have left the party unless their was no alternative.”

Berger, the former Labour MP for Liverpool Wavertree quit the party in February 2019 after enduring “a culture of bullying, bigotry and intimidation”. She was forced to attend the party’s annual conference the previous year flanked by police officers for her protection.

In her first major interview since leaving parliament Berger last week told Jewish News she had no regrets about her decision to quit Labour.

Corbyn, remains an independent MP after current leader Keir Starmer suspended him for insisting antisemitism in the party had been “dramatically overstated” on the same day the Equality and Human Rights  concluded that anti-Jewish racism had taken hold in key areas of the party. The EHRC also noted “serious failings in the Labour leadership in addressing antisemitism and an inadequate process for handling complaints”.

During the Cambridge Union debate, Corbyn was given the opportunity to reflect on his meetings in the past with terrorist sympathisers and Holocaust deniers. Sources at the debate said rather than offer genuine regret he merely repeated his regular claim to be a committed anti-racist.

Asked about his reluctance to adopt the IHRA definition of antisemitism in full, Corbyn denied he did not listen to the Jewish community while he was leader.