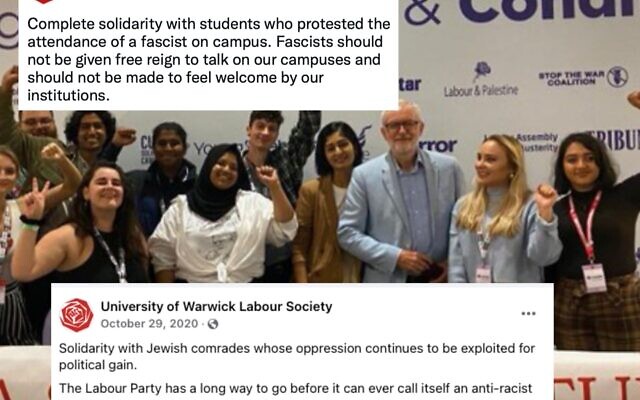 Social media posts by Warwick Labour group, against the background of a picture featuring Sultana and Corbyn

A University Labour group closely linked to MP Zarah Sultana has denounced the EHRC’s damning antisemitism report, defended last week’s intimidation of Israel’s “fascist” ambassador outside a campus and called for the abolition of prisons and the police.

The University of Warwick Labour Society is facing claims it is effectively being run as a supporter’s club for the Coventry South MP, who has hard-left views and is critical of Sir Keir Starmer.

A Jewish News investigation can today reveal how Sultana’s involvement with the famous student Labour society has infuriated a section of her West Midlands local party, who accuse her of ignoring the concerns of ordinary members.

Earlier this month Sultana attempted to distance herself from a photograph that appeared in a national newspaper in which she was seen at the centre of a group of activists holding placards branding police officers “bastards” and “assassins”.

In a statement to the Mail on Sunday, following their publication of the anti-police protest picture, Sultana said she had failed to check the signs held by those around her and added:” ‘I absolutely do not share those views.”

Jewish News can reveal the MP was at the demo in Coventry with student supporters, including Nazifa Zaman, Warwick Labour Society’s communications officer, who is also elected to the national committee of the National Union of Students.

Zaman was photographed holding a sign branded England a “police state” at the protest in back May. 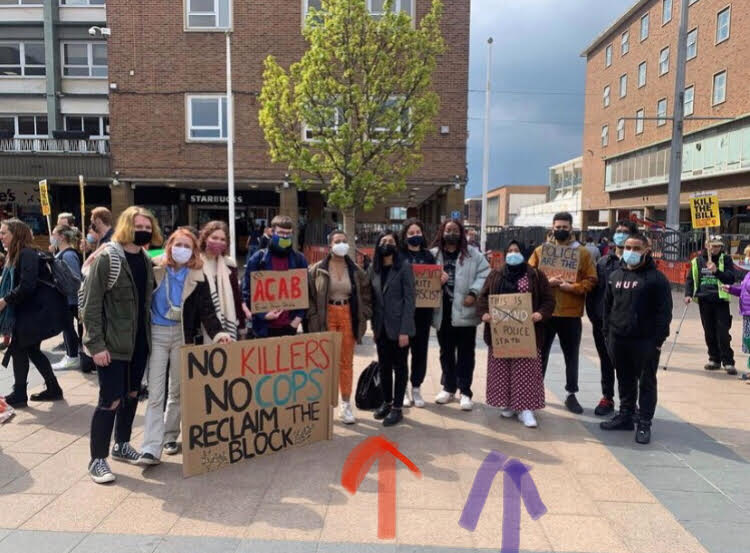 Sultana and Nafiza (see arrows) on anti-police demo in Coventry

But Labour sources claim she has also been at the centre of a campaign at Warwick University to drop its adoption of the IHRA definition of antisemitism.

Using a photograph of herself with Corbyn as her Facebook profile, in July Zaman circulated claims on social media suggesting Warwick’s adoption of IHRA had led to one student being told “raising the Palestinian flag is akin to raising the swastika”.

With fists clenched both Zaman and Sultana are photographed next to one another on a leading image on the Warwick Labour Society Facebook page. 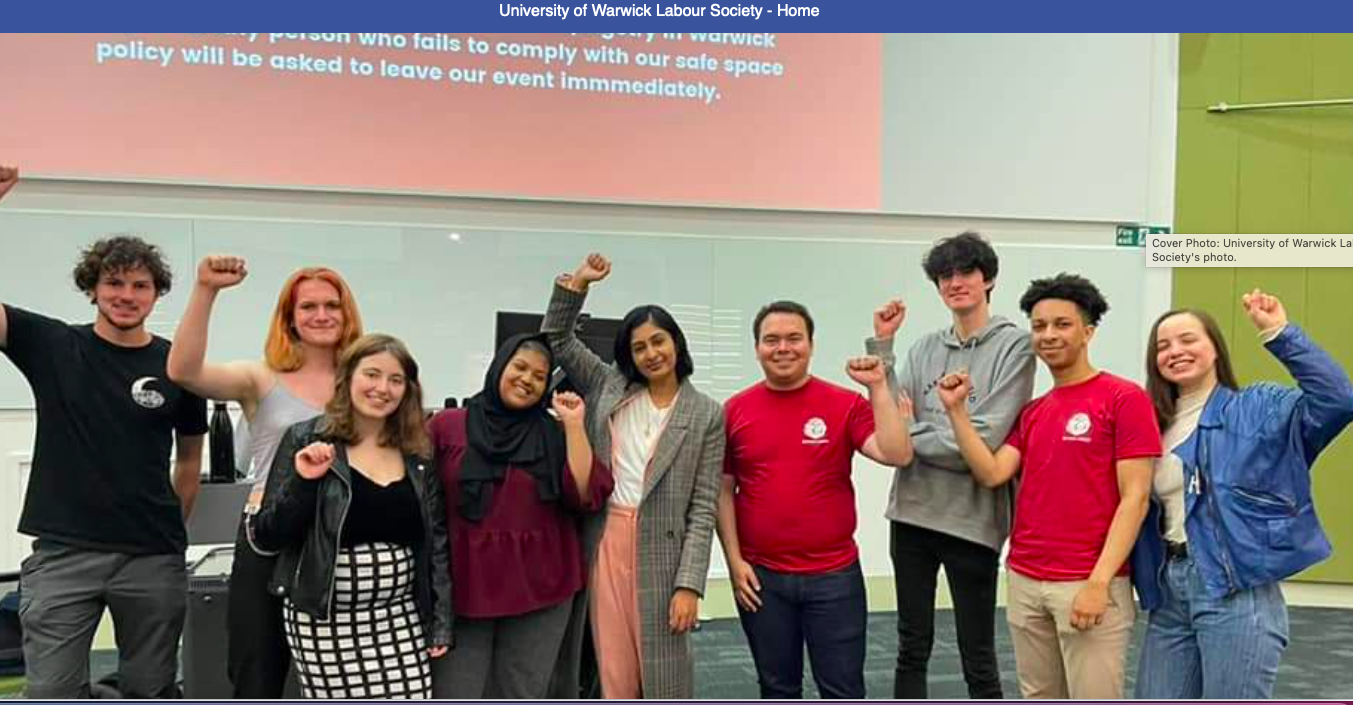 Zarah at the Labour club

Last week, after Israel ambassador Tzipi Hotovely was forced to rush into a waiting car to avoid raging protesters outside the London School of Economics, Warwick Labour managed to couple an extraordinary attack on Starmer for condemning the defund the police campaign as “nonsense” with claims of “settler colonialism” against Israel.

In a post on Twitter a statement by the group read: “From overseeing the prosecution of teenagers during the 2011 riots to calling demands to defund the police “nonsense” to criticising LSE students protesting settler colonialism and genocide, Keir Starmer has shown where his loyalties lie: with a racist and violent state.”

From overseeing the prosecution of teenagers during the 2011 riots to calling demands to defund the police “nonsense” to criticising LSE students protesting settler colonialism and genocide, Keir Starmer has shown where his loyalties lie: with a racist and violent state. https://t.co/iwpMSYDWH1

In an earlier attack on the Israeli envoy they wrote: “Complete solidarity with students who protested the attendance of a fascist on campus. Fascists should not be given free reign to talk on our campuses and should not be made to feel welcome by our institutions.”

When the damning EHRC report into Corbyn’s handling of antisemitism was announced in October 2020 the response from the Warwick University Labour Society was to post the claim that “Jewish comrades oppression” had been “exploited for political gain.” 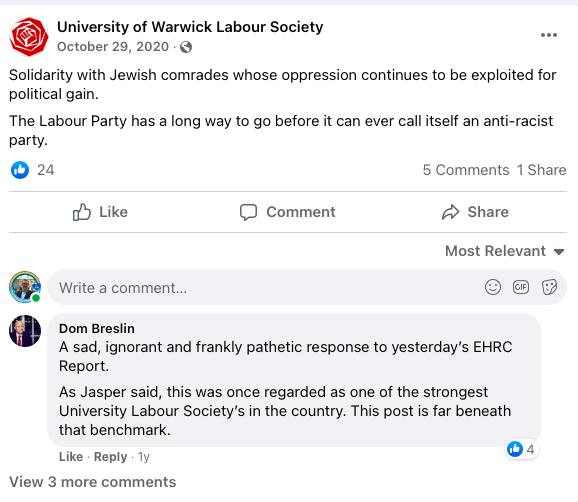 Local Labour sources have told Jewish News how other student supporters of Sultana have also been involved in senior roles in the Warwick University society.

Current president Will Lamb has repeatedly attacked current leader Starmer in social media posts and has claimed that under the leader Labour is “suppressing any forms of Palestinian Solidarity within the party” which he claimed was “beyond reprehensible.”

With Sultana only securing the seat with a majority of 400, reduced from 8000 at the previous election, the feeling of some in the party is that the seat will be lost if a new candidate is not found to contest the seat.

Jewish News contacted Sultana for comment over the claims made in this article.