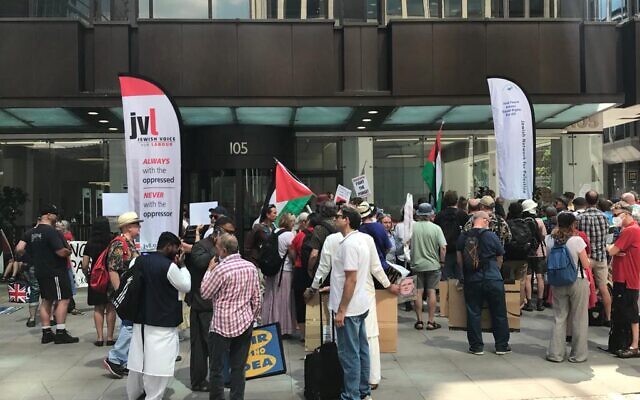 JVL banner can be seen at a small demonstration

Jewish Voice For Labour’s political officer Graham Bash has been expelled from the Labour Party over his support for a banned organisation that consistently downplayed and denied antisemitism allegations.

Bash, a long-time ally of Jeremy Corbyn and John Mcdonnell, confirmed he had received notification of his auto-exclusion from, because of his support for the proscribed Labour Against The Witchhunt group.

Attacking the decision to expel another one of their officials, JVL, who were set up to defend ex-leader Corbyn against antisemitism charges, said Bash, who has the right of appeal against his expulsion “has been excluded for doing something that was perfectly legal at the time – supporting (whatever that means) an organisation there was no restriction on supporting at the time.”

Labour’s ruling NEC had voted to proscribe four groups, including Labour Against The Witchhunt, in July, as part of a wider move to tackle antisemitism in the party.

Former shadow chancellor McDonnell tweeted:”I’ve known & campaigned alongside Graham Bash for over 40 years. He is one of the finest socialists I have met.”

But Bash, who is Jewish himself, has a lengthy history of downplaying antisemitism allegations within Labour – including his involvement with a counter-demonstration held on the same day as the Enough Is Enough demonstration outside parliament at the height of the crisis under Corbyn’s leadership in July 2019.

Appearing on BBC News on the same day as the Enough Is Enough demo, Bash said:”The people who putting out these smears are those who are trying to undermine the Labour leadership and the party in the run up to the elections. What they are doing is this … it’s a combination of the right wing of the party who want to undermine Jeremy and the pro-Israel lobby who conflate antisemitism with criticism of Israel. It’s a cruel deception.”

Bash, a member of South Thanet CLP, said Corbyn was “over-generous” when he issued an apology for “small pockets” of antisemitism in the party.

He then used the same interview to claim the main victims of these antisemitism allegations were themselves Jewish or were “black activists.”

Commenting on claims of widespread anti-Jewish racism in Labour, Bash said he had only ever witnessed one instance of antisemitism at a party meeting in Hackney.

Although it is understood he moved to the Kent coast in 2015, ahead of the influx of hard-left activists into local city based Labour branches after Corbyn became leader.

Bash’s long-time partner is Jackie Walker, herself expelled from Labour over antisemitism allegations.

As editor of the left-wing publication Labour Briefing, Bash wrote a piece defending Walker following her initial suspension from the party.

In a May 2015 editorial for the publication he wrote that Walker had been “outrageously suspended from the Labour Party, simply for telling the truth that her Jewish ancestors were involved in financing the Slave Trade, that the African holocaust was even worse than the Jewish holocaust, and that antisemitism is not a major problem in Corbyn’s Labour Party.”

Walker would later reveal how Bash had shared his views on Jon Lansman, the Jewish founder of the Momentum organisation, with her.

This included a claim that Bash had said of Lansman “within the last few years his ‘Jewish exceptionalism’ has become apparent to me.”

She said Bash had explained that Lansman’s “absence of any Marxist perspective also meant that he was unable to resist nationalist/exceptionalist pressures (ideas that see Jews as exceptional).”

Walker revealed Bash had told her: “I can understand this. Even though I was brought up in a left wing Jewish family I was still many ways – psychologically – a Jewish exceptionalist. And only years of Marxist training enabled me to overcome this.”

Having been on the editorial board of Labour Briefing for over 40 years, Bash was there when the magazine said the Brighton IRA bombings in 1984 showed that “the British only sit up and take notice [of Ireland] when they are bombed into it”.

In December 1984, the magazine carried a reader’s letter praising the “audacity” of the IRA attack and stating: “What do you call four dead Tories? A start.”

Jewish News has contacted Bash for comment on his expulsion from Labour.