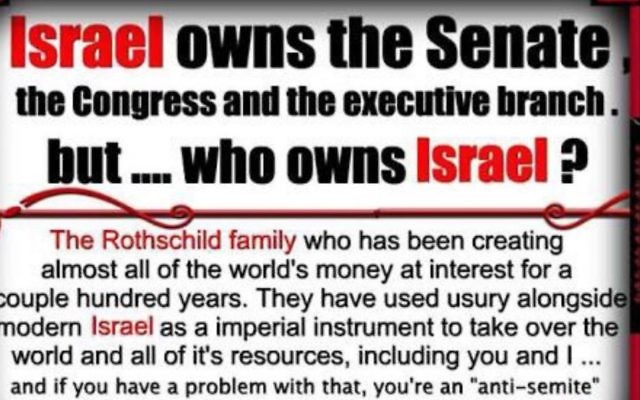 The image which John Clarke retweeted, and claimed contains a "great deal of truth", has been subject to accusations of anti-Semitism

A former Labour parliamentary candidate has been condemned for anti-Semitic postings on Twitter.

Serving Essex councillor John Clarke was criticised after endorsing a post online which said “The Rothschild Family” has used money lending and Israel to “take over the world.”

Claiming the post by ‘Tinnelle’ (@Tinnelle88) was “an oversimplified view of the world economy but containing a great deal of truth”, he was condemned as promoting anti-Semitic material by other users on the social media site.

The councillor, who is also chair of governors of local Essex primary school White Notley, and the local Parish Council, promoted the tweet, which is headlined ““Israel owns the senate, Congress and the Executive” of America… but who owns Israel?”.

The text of the post reads: “The Rothschild Family.. has been creating almost all of the world’s money at interest for a couple of hundred years”.

It adds that they “have used usury (money lending) alongside modern Israel as a imperial instrument to take over the world and all of it’s [sic] resources, including you and I… and if you have a problem with that, you’re and anti-Semite.” 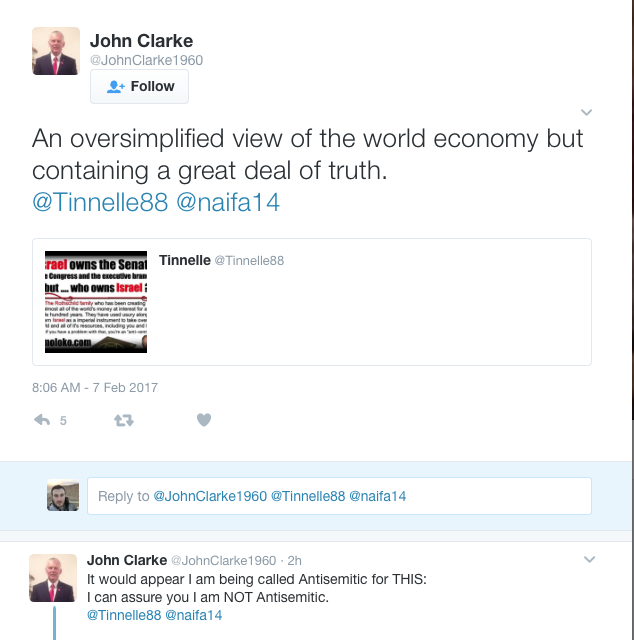 The endorsement of the post by John Clarke, which was followed by a denial he was anti-Semitic

Challenged by users about the post, Clarke, who is the current chair of Whitham branch of Labour, and was the constituency’s prospective parliamentary candidate, repeatedly denied being anti-Semitic.

After sending the tweet, he was challenged, and replied by saying: “It would appear I am being called Antisemitic… I can assure you I am NOT”.

Probed further he said: “I agree original account probably Antisemitic. I am anti-Rothschild not Antisemitic. End of.”

He added: “Antisemite smear in constant overuse as those who use it expand their power base”, and that he objects to “Rothschild & co. against their greed, monopolistic exploitations & unchecked power.”

He concluded by saying he would block those who “accuse me of Antisemitism merely to close down legitimate criticism of Israel &/or Rothschild family. End of.

Following the retweet of the anti-Semitic post, Jeremy Newmark, chair of the Jewish Labour Movement said: “These tweets are appalling, ignorant and downright offensive. We are certain that the Party will want to investigate and take swift action.”

When approached, the Labour Party said “all information received will be considered and subject to the standard process”, reading the incident.

Headteacher Essex primary school White Notley Mrs Ruth Baugh said: “We are an inclusive school and embrace a Christian ethos, actively promoting equality and diversity, as outlined in our school aims and values. We have clear expectations of both our staff and governors and expect them to use social media responsibly.

“The allegations made against a governor will be investigated, in line with our code of conduct and complaints procedure.”