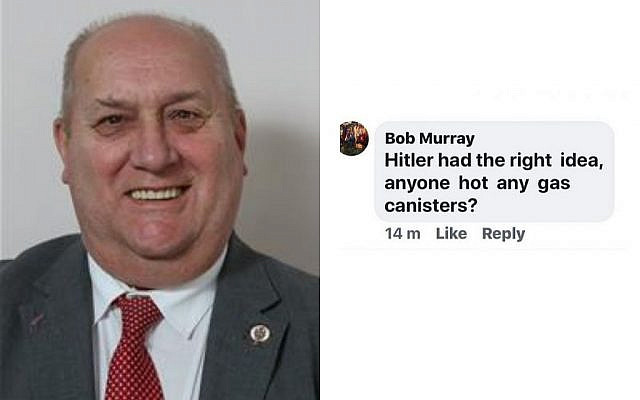 A Labour councillor in Wales suspended earlier this year over a social media post has been reinstated after a probe found his account was hacked.

Denbighshire councillor Bob Murray was cleared of wrongdoing last week after he was suspended from Labour in April over a Facebook comment saying Adolf Hitler “had the right idea” about travellers.

The post was described by Holocaust Educational Trust chief executive Karen Pollock at the time as “vile and offensive” and “not befitting of anyone, especially someone in public office.”

The Public Services Ombudsman for Wales cleared councillor Murray of a breach of Code of Conduct, while North Wales Police discovered “no evidence” the councillor had placed the comments himself.

Councillor Murray, who always denied the allegation, said he was “pleased” the suspension had been lifted. “It has been a very difficult few months that has put a huge strain on me but I would like to thank my fellow councillors, friends and residents for their support,” he said.

Labour MP for Vale of Clwyd Chris Ruane, said: “We all share the horror at the comments that were maliciously placed under Bob’s name. They are not representative of our party and have no place in our society.

“I know that the last few months will have been difficult for Bob. I’m glad that following a full investigation by the Labour Party and the Ombudsman, Bob re-joins the Labour Group. He is a hard working local councillor and I look forward to campaigning alongside him again.”

A Labour spokesperson said the party “takes all complaints of this nature extremely seriously, and they are fully investigated and any appropriate disciplinary action taken in line with the Party’s rules and procedures.

“While we cannot comment on individual cases, there is no place in society for sexism, homophobia and anti-traveller racism.”