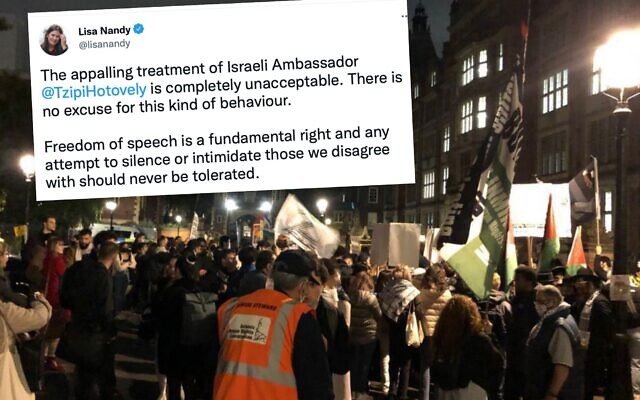 An elected Labour councillor has accused shadow foreign secretary Lisa Nandy of putting out an “appalling statement” after she condemned the actions of the students who threatened the Israeli ambassador at a London School of Economics event.

Aydin Dikerdem, Labour councillor for Queenstown, in Battersea, south west London, responded to a tweet posted by Nandy stating attempts to stifle freedom of speech “should never be tolerated” by defending the actions of the protesters against Tzipi Hotovely’s appearance on Tuesday night.

He tweeted:”The exact same behaviour towards the upholders of South African Apartheid or Jim Crow are lauded now in retrospect.

“There is nothing wrong with holding a demonstration outside an event when a genocide denier is speaking.

“This is an appalling statement by you.”

The councillor said he “could not fathom how we have ended up in a place whereby people who claim to have progressive politics are defending openly racist far-right ethnic-nationalist ideologues against orgs like Naamod UK.”

He then called on Nandy to apologise.

But the Labour frontbencher had been clear in her post that she did not agree with the Israeli envoy’s politics.

But she suggested “any attempt to silence or intimate those we disagree with should never be tolerated.”

Nandy also wrote:”The appalling treatment of Israeli ambassador Tzipi Hotovely is completely unacceptable. There is no excuse for this kind of behaviour.

‘Freedom of speech is a fundamental right.”

It had emerged that activists from LSE Class War had posted an Instagram story ahead of Tuesday’s debate urging students to take violent action.

Some students argued that Likud Party hardliner Hotovely should be deplatformed over her controversial statements on the Palestinians.

The event at LSE was part of a series of debates on the future of the Middle East, with the head of the Palestinian mission to the UK Husam Said Zomlot to speak on Thursday November 11.

Nandy has long argued against the practice of “no-platforming” at political discussion events.

She has previously attracted condemnation from hardline pro-Israel supporters, having attended pro-BDS meetings, but then arguing against the use of boycotts.

Labour has been contacted for comment over Cllr Dikerdem’s remarks.