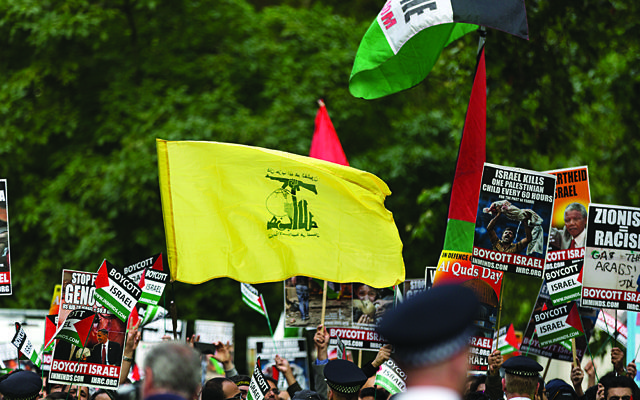 The former secretary of Stroud Green Labour has been suspended within weeks of being elected after a poem expressing “love” for Hezbollah was exposed.

Huseyin Abudharr Ali, who was elected by 36 votes to 7 last month, has been suspended from the party and his role after online posts were uncovered, it is understood.

A review of Ali’s blog found a number of antisemitic references and a photograph of Ali standing next to a man holding up an Hezbollah flag.

It is believed the photograph was taken before Hezbollah was proscribed in its entirety earlier this year.

Ali, who described Jeremy Corbyn as an “anti-Imperialist and anti-racist” in 2017, is the secretary of the local Palestine Solidarity Campaign (PSC) Haringey Justice for Palestinians.

Mark Gardner, director of communications at the Community Security Trust, described the material as “highly offensive”, adding that “it should have no place in Labour Party politics.”

A blog post from 2014 claims Israel is backed by “Hollywood”, describing it as “the US’s main propaganda machine […] run by Zionists (those who support ‘Israel’).”

Another blog post, published a year later, compares Israel to ISIS and claims similarities between the Jewish state and designated terrorist group.

“If we’re serious then they are the same, but at least Israel can justify itself due the suffering that Jews have suffered the last 100 years, including the holocaust in which six million Jews were killed, whilst Muslims have had everything going dandy for them the last 100 years, no invasions, violent coups, ethnic cleansing, bombing of their lands targeting civilians or oppression has ever happened to them has it,” it reads.

A Labour Party spokesperson said: “The Labour Party takes all complaints of antisemitism extremely seriously, which are are fully investigated in line with our rules and procedures and any appropriate disciplinary action is taken. We cannot comment on individual cases.”

A PSC spokesperson said the organisation condemns any manifestation of antisemitism. “We have procedures in place to investigate any such allegation and will take disciplinary action including revoking the membership of those found to behave contrary to our anti-racist principles,” the spokesperson added.