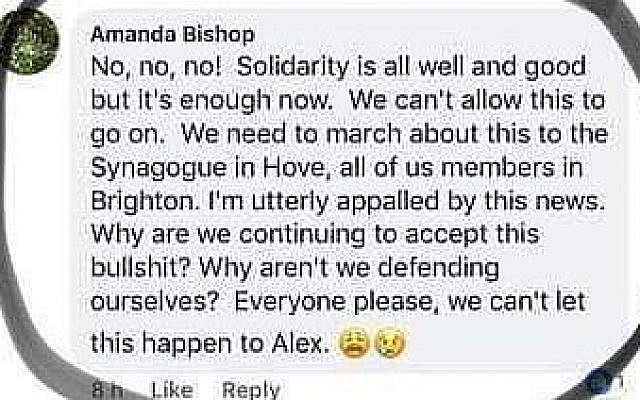 A Labour activist has been suspended after saying people should “march” on the local synagogue, after another member was disciplined for alleged antisemitism.

Taking to Twitter, he said “tonight, after I first read the comments today and reported them, she has been suspended. This is antisemitism and not acceptable in our society and our party; no excuses.”

The head of the Jewish Labour Movement said it was “truly beyond belief” that Bishop wrote her comments on Facebook, as revealed by the Red Roar.

She was responding to the suspension of Alex Braithwaite, a local volunteer who was suspended after she claimed that the Rothschilds were “responsible for almost every war on Earth”, “Satanist”, and linked to “the Illuminati”.

What she said was revolting and tonight, after I first read the comments today and reported them, she has been suspended. This is anti-semitism and not acceptable in our society and our party; no excuses.

Bishop replied to a post on the Brighton and Hove Labour Party Forum’s page, writing: “Solidarity is all well and good but it’s enough now. We can;t allow this to go on. We need to march about this to the synagogue in Hove, all of us members in Brighton.

“I’m utterly appalled by this news. Why are we continuing to accept this b*****t? Why aren’t we defending ourselves? Everyone please, we can’t let this happen to Alex”.

It is understood she has been suspended pending investigation.

A Labour Party spokesperson said: “The Labour Party takes all complaints of antisemitism extremely seriously and we are committed to challenging and campaigning against it in all its forms. All complaints about antisemitism are fully investigated in line with our rules and procedures and any appropriate disciplinary action is taken.”

The European Jewish Congress has called for the police to investigate Bishop, with Dr. Moshe Kantor, President, calling it “one of the most egregious cases of incitement to violence against Jews that I have heard in a long time,”

Mike Katz, the chair of the Jewish Labour Movement took to Twitter to say: “Truly beyond belief. When is ‘let’s march on the Synagogue’ ever the right reaction? Won’t have it from neo-Nazis. Won’t have it from supposed progressives.”

Board of Deputies Vice President Amanda Bowman said: “Labour needs to look itself in the mirror and ask itself about how this culture has grown up. Bigots like Amanda Bishop need to know that people who seek to threaten, bully or abuse our community will fail. Where prejudice shows its face, the Jewish community, whether at a national level or through our brave grassroots activists, will never be silenced.”

MP Ian Austin, who quit the party earlier this year, added: “This really is appalling. She should be booted out of Labour and the police should be investigating her for incitement, but it shows how much has gone wrong with the Labour Party under Jeremy Corbyn’s leadership that people with views like this are joining the party or feel able to say this disgusting stuff. What are decent Labour MPs and members going to do about it?”

Nick Lowles of Hope NOT Hate, an anti-racist charity, added: “This is one of the most appalling things I have read in a long time. A Labour Party member calling fellow members to march on a synagogue to protest against someone being suspended from the Labour Party. I can’t believe I’m reading this! Labour how will you respond to this?”

Euan Philipps, spokesperson fro Labour Against Antisemitism: “This apparent threat to march on a synagogue in response to the suspension of a Labour council candidate for antisemitism is extremely concerning. The member involved in making this threat needs to be immediately expelled to show that this kind of incitement to racial violence has no place in British politics. If that person is also a member of Momentum then Jon Lansman needs to take strong and public action as well.

“The Labour Party in Brighton has been shown to have a deep-rooted and longstanding problem with antisemitism. It is about time Jeremy Corbyn got a grip and placed the city’s Labour branches in special measures, before we find ourselves talking about real acts of racial violence being committed.”