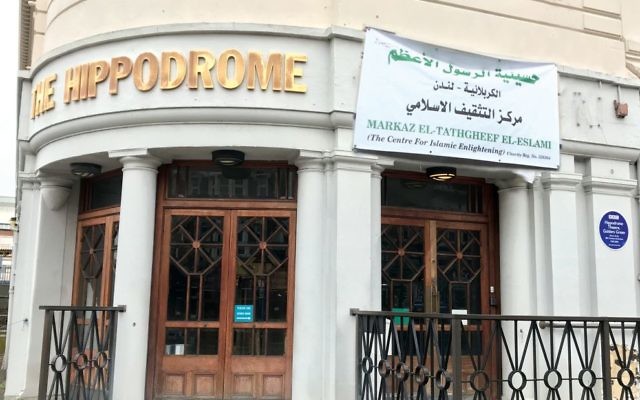 Barnet’s Labour councillors have accused local Conservative officials of “Islamophobia” over the postponement of a change of use planning application for the Hippodrome in Golders Green.

Leader of the Barnet Labour Group, Cllr Barry Rawlings, also confirmed to Jewish News he was “referring the whole episode” to the Equalities and Human Rights Commission (EHRC) for them to investigate.

Planning officers had earlier recommended approval of the Islamic Centre on behalf of the Markaz El Tathgheef el-Eslami group.

But at Monday evening’s meeting the Conservative Chair of the Strategic Planning Committee suggested that the application be deferred for more information on traffic, and the travel and event management plan so members could vote on them.

Critics of the deferral move say comprehensive plans on fire escapes and travel were all part of the earlier planning committee report.

“They have clearly treated this Muslim organisation in a different way to other religious organisations and most people will see this – and the disgraceful deferral of the application last night – for what it is, islamophobia.

“The actions of both the Council and the Conservative administration make a mockery of the Council’s recent updated Equalities, Diversity and Inclusion policy, and its supposed zero tolerance policy against racism.

“I will be referring the whole episode to the Equalities and Human Rights Commission for them to investigate.”

Cllr Dan Thomas, Leader of the Council later responded saying:“Cllr Rawlings’ accusations are nonsense and he knows it.

“The Council often defers applications, and doing so gives the officers time to work with the applicant to resolve outstanding issues.

“We’re incredibly proud of how diverse our borough is, and we would never take any decisions that would harm that diversity or any of our communities.

“We’re incredibly proud of our diverse borough, and are conscious of supporting all our communities in every decision we take.

“Cllr Rawlings has said he is going to refer this matter to the EHRC – a body his Party knows intimately. This is, simply, political theatre from the Barnet Labour Leader who is seeking to sow division that he knows doesn’t exist.

“We look forward to the Markaz team working with officers over the coming months and bringing this application back to be further considered in the autumn.”

The Markaz, a Shia Muslim organisation made up of refugees who fled persecution in Iraq, have been asked to provide a travel plan and an event management plan for worshippers using the venue, although the numbers attending the venue are only around 150 most weeks, with a cap of 500 on attendees apart from 10 high holy days where 1,400 are allowed.

This is significantly below the 3,000 people allowed at events when the Hippodrome was a concert hall and church.

The Christian organisation in previous occupation of the Hippodrome was not required to provide a travel plan to mitigate parking or an event management plan.

Barnet Council are looking at special extra parking provision for another religious organisation just 5 minutes’ walk away from the Hippodrome.

The Markaz had already sent a letter before action to the Council following the delays to the determination of the application over the last year, alleging religious discrimination.

“We look forward to the application being further considered in the autumn”.

Childs Hill Labour councillor and Barnet & Camden AM, Anne Clarke said:“The Markaz bought the Hippodrome in good faith, they wanted a centre for their refugee community and should have had the same welcome as any other faith group in Barnet.

“Despite the treatment they’ve received from Barnet Council, they have always warmly welcomed the wider community into the space.

“This planning meeting should have marked the end of years of uncertainty, but Barnet Tories instead decided to defer and delay the application. Shame on them.”

A representative of Golders Green Residents Environment Group (GGREG) said they welcomed the decision taken by Barnet Councillors to delay making a decision “until Markaz do what they have to date resisted and produce travel, transport, noise and crowd control plans.”

The group also claimed: “Markaz and their supporters have repeatedly sought to weaponise religion as a factor in this application.