From the director who spent four years going to Hebrew school (even though he’s Catholic), to the musical men behind the enthralling soundtrack and even the producer who thought he was taking home the Oscar for best picture – here are the top 10 reasons why La La Land is so very Jewish…

Director Damien Chazelle, who at the age of 32 years and 38 days, is the youngest ever recipient of the best director Oscar, grew up in a Catholic household but actually went to Hebrew school. Dissatisfied with their son’s education at a church Sunday school, Chazelle’s parents sent him off to a nearby Hebrew school in Princeton, New Jersey, where he attended for four years.

“I had that period of my life where I was very, very into Hebrew and the Old Testament, and then I went with my class to Israel when we were in the sixth grade,” Chazelle told the Jewish Journal of Los Angeles in 2015. “I don’t think they even knew I wasn’t Jewish; I was, like, ‘passing.’”

While Chazelle was at Harvard, he lived with composer Justin Hurwitz and collaborated with him on La La Land. Hurwitz is now an Academy Award-winning composer, thanks to the two Oscars he picked up on Sunday night for Best Original Score and Best Original Song. The Jewish composer also worked on the music for Chazelle’s previous films, including the acclaimed Whiplash.

Hurwitz worked alongside Jewish lyricist Benj Pasek and his partner Justin Paul, including on the award-winning song, City of Stars.

La La Land became the third film in history to pick up an incredible 14 Academy Award nominations, tying it with Titanic (co-produced by Jon Landau, composed by James Horner) and All About Eve (directed by Joseph L Makiewicz). On the night however, La La Land took home seven of the coveted Oscars.

Leading man Ryan Gosling might be an established A-lister today, but the Canadian-born actor’s first big break actually came as a Jewish neo-Nazi in The Believer. 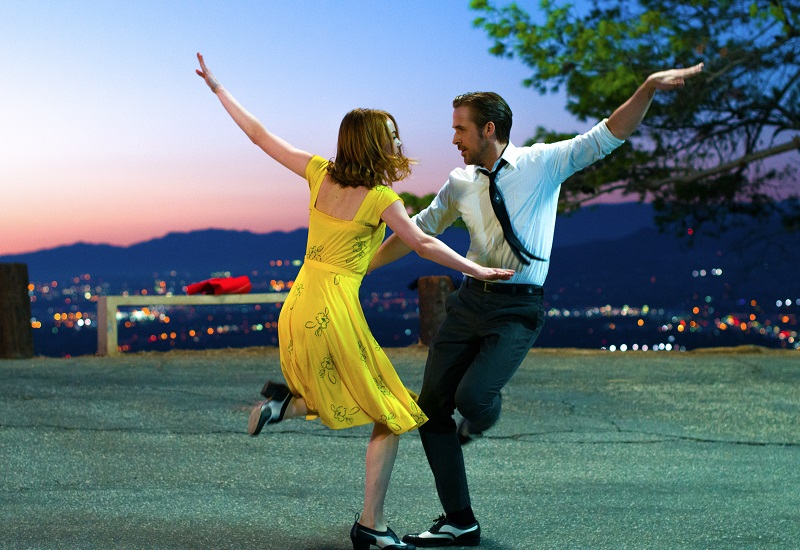 Gosling revealed that he and his co-stars watched Singin In The Rain every day for inspiration, a film that had a largely Jewish team behind it including producers Stanley Donen and Arthur Freed, writers Betty Comden and Adolph Green and composer Lennie Hayton.

Speaking of choreography, one of the most romantic dance sequences involving Emma Stone and Ryan Gosling takes place at Griffith Observatory inside the Leonard Nimoy Event Theatre, named after the late Jewish Star Trek actor.

All four of the film’s producers – Jordan Horowitz, Gary Gilbert, Marc Platt and Fred Berger – are members of the tribe. Berger and Horowitz both grew up in Westchester, New York and even played in the same Jewish temple basketball league together.

Just as he began to accept the award for Best Picture from Faye Dunaway and Warren Beatty, Horowtiz probably never thought in a million years that a mistake had been made – or that he would end up revealing the shocking truth live on camera – but that is exactly what happened on Sunday night when La La Land, rather than Moonlight, was named as the winner. When panicked crew informed him of the mix-up, it was Horowitz who grabbed the microphone and announced “Moonlight won Best Picture”, before assuring the gasping audience, “this is not a joke”. And you thought the drama was just in front of the cameras…

Speaking of Jewish mix-ups at the Oscars, John Travolta unwittingly propelled Idina Menzel to Twitter trending stardom when he failed to correctly pronounce her name at the 2014 ceremony and inexplicably came up with Adele Dazeem. But in true Frozen fashion, she let it go…