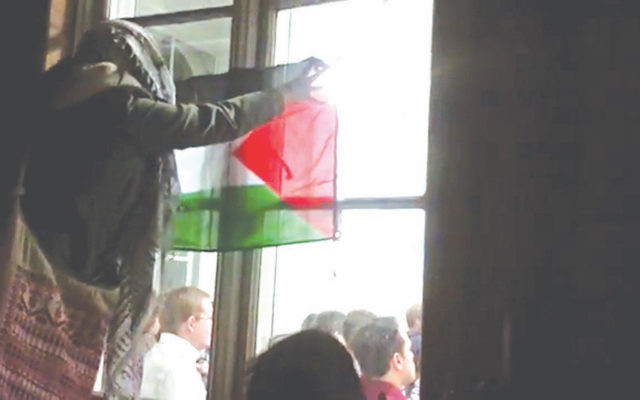 King’s College London has imposed “sanctions” on a number of students involved in rioting during an Israel Society event in January, Jewish News can reveal.

Police were called to the London campus as around 20 anti-Israel protesters set off fire alarms, smashed a window and hurled chairs as former Shin Bet chief Ami Ayalon addressed an event. A senior figure in the Israel Society also claims they were assaulted.

An investigation last month found that protesters “crossed a line and should be held accountable” by a disciplinary committee.

A spokesperson for the university said: “I can confirm that sanctions have been imposed by the disciplinary committee as a result of the misconduct hearing. These sanctions are a serious matter for all concerned but are confidential to the university and individuals involved. We are therefore unable to provide more specific details, as we cannot comment on individual cases.”

The university’s disciplinary procedures include a confidentiality clause but sanctions can mean anything from a warning to suspension and expulsion. Action can also include a reprimand, payment for damage, a fine payable to charity and community service.

Police were called to the event, following reports of violence from the protesters

King’s also said other London universities were addressing the involvement of other students alleged to have been involved in the incident – which drew immediate condemnation from the government.

Following the university’s investigation, which recommended a misconduct hearing, a UJS spokesperson said: “We are pleased to see that King’s College London has taken this disgraceful incident of violent intimidation so seriously. Its quick and thorough report will act to reassure Jewish students at King’s that appropriate action will be taken. We look forward to many more events at King’s where a variety of speakers from across the political spectrum can engage in matters surrounding Israel.”

Accepting the recommendations, Professor Ed Byrne, President and Principal of King’s, said: “We have a duty to uphold freedom of speech within the law and will fight against intolerance wherever it is found. Intimidating behaviour is completely unacceptable and goes against everything that we stand for at King’s.  We do not, and will not, condone the use of any form of violent protest.”

The Board of Deputies President and Vice President condemned the actions as “violent and criminal ”, while the he Israeli Embassy said it was “shocking and shameful”, reflecting the “fear that groups centred around hatred of Israel harbour.”