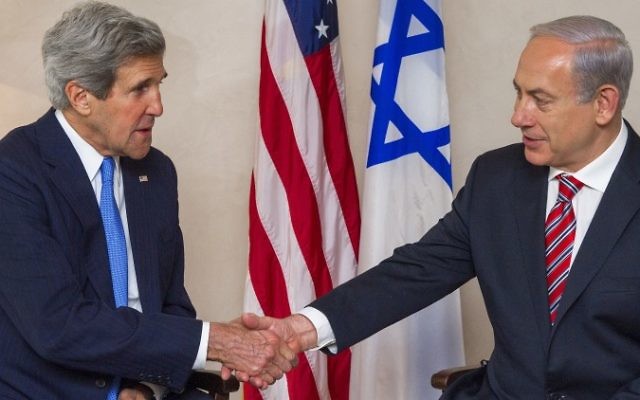 U.S. Secretary of State John Kerry told Israeli Prime Minister Benjamin Netanyahu that the Paris peace conference will not lead to further action at the United Nations or other international bodies.

Kerry spoke by phone with Netanyahu on Sunday afternoon, according to reports. Kerry was one of more than 72 international leaders who attended Sunday’s peace conference in Paris. Late last month, Kerry delivered a lengthy speech in which he laid out six principles that the United States believes must govern the resolution of the Israeli-Palestinian conflict while rebuking Israel’s “pernicious policy of settlement construction.” Kerry leaves office on Friday when President-elect Donald Trump takes the oath of office.

The conference closed on Sunday with a final statement that called on Israel and the Palestinians to “officially restate their commitment to the two-state solution” and to not take unilateral actions that would jeopardise future peace talks.

“The conference convening in Paris today is a useless conference. It is being coordinated between the French and the Palestinians. Its goal is to try and force terms on Israel that conflict with our national needs,” Netanyahu said. “Of course it pushes peace further away because it hardens the Palestinian positions and it also pushes them away from direct negotiations without preconditions. I must say that this conference is among the last twitches of yesterday’s world.”

“Tomorrow’s world will be different – and it is very near,” Netanyahu concluded, alluding to the Trump presidency.

Kerry briefed Netanyahu on efforts the Americans are making to soften the wording of the summit’s concluding statement, the Israeli daily Haaretz reported, citing an unnamed senior Israeli official.

Netanyahu reportedly told Kerry that Israel had already paid a diplomatic price for the U.S. decision not to veto last month’s U.N. Security Council resolution which slammed West Banks settlements, according to Haaretz. Netanyahu has criticised the current international peace process, saying only direct negotiations between the two parties will be effective. Neither Netanyahu nor Abbas traveled to Paris for the conference.

Over 1,000 pro-Israel supporters, most Jewish, protested against the peace meeting outside of the Israeli embassy in Paris on Sunday.

French President François Hollande said in opening the conference that: “The two-state solution is not the dream of a system of yesterday. It still remains the objective of the international community.”

He acknowledged, however: “It’s not a matter of dictating to the parties the terms of a deal… Only direct negotiations between Israelis and Palestinians can lead to peace; no one will do it in their place.”