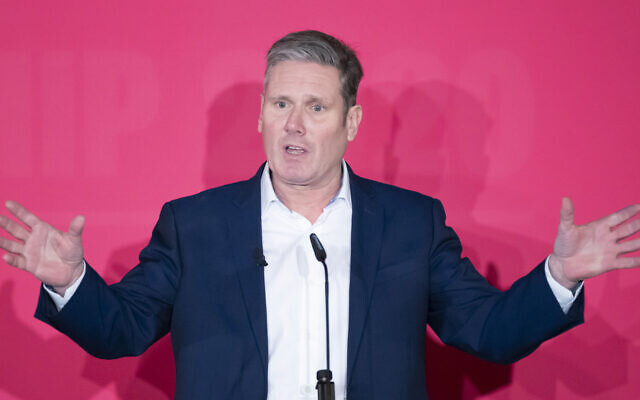 Labour leader Sir Keir Starmer vowed to “kick antisemites” out of the party on Monday as he faced criticism for his general election support for Jeremy Corbyn during a radio phone in.

An LBC Radio listener confronted the leader of the opposition over his support for the party’s former leader during the 2019 election despite the row over alleged antisemitism in the party.

“Other MPs left the Party, so disgusted at the antisemitism. So, in all honesty, saying the right things now when you ignored the Jewish community at a time when they were crying out for help, actually now, when it’s convenient you can say something. That’s not principle. It’s empty words, so, you know, what’s changed?”

In response, Starmer – who previously served as shadow Brexit secretary – said he reached out to jewish leaders within hours of being elected Labour leader.

He said: “Those communities and those leaders have at least given me enough trust to do what I’ve got to do, and I had a good discussion with the Chief Rabbi as well. So, David, I am well aware of the nature and scale of the task. I will be judged by results, of course.”

He added:”We have already made changes to our disciplinary process. There are people being suspended and expelled from the Labour Party and I’ve asked those Jewish leaders and communities to trust me by my actions … The Jewish Labour movement have agreed to do training with us and to keep that dialogue open and so all I ask is that they and you give me the space to show what I will do, and I will kick antisemites out of the Labour Party.”

Another listener, who identified herself as Jewish, told Starmer that she had reluctantly backed the Labour Party at the last general election.

Danielle, from Bournemouth, said: “I’ve been a Labour supporter most of, you know, all my adult life, but I, I have, I’ve had a wobble.

“I struggled during the Corbyn years, for many reasons, one of them being that I’m Jewish. I did vote Labour, reluctantly, in the last election, Sir Keir, and I feel very positive, now, about the Labour Party.”

The EHRC launched its formal investigation last May to determine whether the party had unlawfully discriminated against, harassed or victimised Jews.