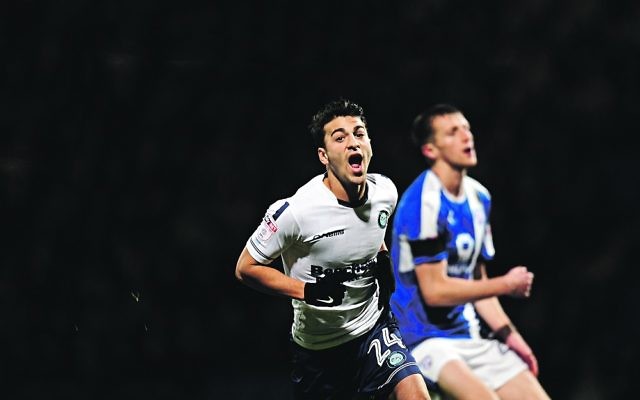 Wycombe Wanderers striker Scott Kashket said it was an amazing feeling to walk off the pitch with the match ball after he netted a hat-trick in their 5-0 FA Cup win over Chesterfield at the weekend.

The 20-year-old’s treble makes him the League Two side’s top scorer for the season and he told Jewish News: “Before the game, I was thinking this would be the game I wanted to get a hat-trick – it’s something growing up I’ve dreamt about – and now I’ve been lucky enough to do it in the FA Cup. Walking away with the match ball was brilliant, it was an amazing feeling.”

Saturday’s hat-trick made it nine goals in nine games, and he was rewarded 48 hours later by a three-year contract. He said: “I’m very happy at Wycombe. I’ve played down the right-wing, but in the last few games the manager has wanted me to play on the last man’s shoulder and I’m enjoying it.”

Confident of making it through to the fourth round, having been drawn at home to face either Northampton or Stourbridge (the lowest ranking side left in the competition) in the third round, and possibly emulating the Wycombe side who reached the semi-finals in 2001, he said: “You’d like a big name away, but it’s not a bad draw and I reckon we’ll be confident that we can get to the next round. It’s a home game as well so we need to concentrate on that, win that and then hopefully get a bit of the luck in the draw for the fourth round. It would be absolutely brilliant to emulate that side of 2001.”

He plays alongside fellow Jewish footballer Joe Jacobson, who he describes as “a very friendly guy.” He said: “You don’t get too many Jewish footballers about, but we have two in the same team.”

The former Wingate & Finchley player, who won two bronze medals for Team GB at the 2011 European Games and 2013 Maccabiah, is also hopeful he can win something with the Buckinghamshire side.

November saw them claim four successive wins, which saw them move up to sixth place in the table having been languishing in 21st place. “I’m hoping we can get promoted at the end of the season”, he says. “We were a bit unlucky at the start of the season, decisions weren’t going our way and we had some injuries, but people are now coming back and we’re getting a few decisions in our favour.

“A cup run generated a bit of excitement, it’s a one-off game where anything can happen and provides good money for the club, but the main aim is the push for promotion.”