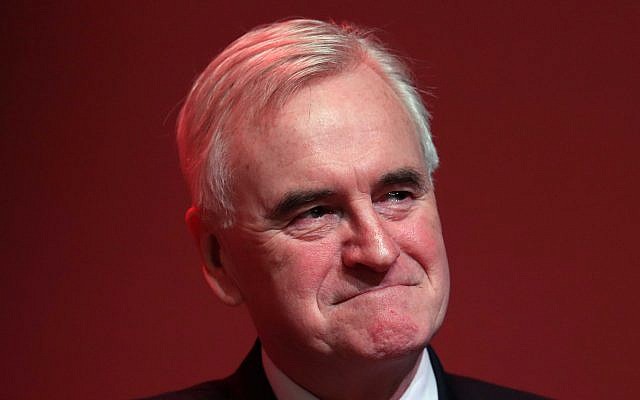 John McDonnell has expressed concern that some members of the pro-Jeremy Corbyn Jewish Voice for Labour now being expelled or suspended from Labour are “quite elderly.”

The former shadow chancellor – who insists he has always believed that “one antisemite in Labour is one too many” –  said in an interview with a left-wing website,  it was “disturbing” so many JVL members were amongst those being sanctioned under Sir Keir Starmer’s leadership.

While JVL members make up a fraction of the total number of people being sanctioned by Labour, McDonnell claimed in the interview: “I do find it ironic and disturbing the large number of Jewish members who have been expelled.

“Moreover some of the JVL members being expelled are quite elderly and the way they have been treated is again disturbing.”

Earlier this month, Jewish News revealed how JVL’S co-chair Leah Levane had become the latest member of the group, which was set up to defend Corbyn against allegations of antisemitism, to be expelled from Labour.

Levane was escorted out of Labour’s annual conference in Brighton and given notice of her expulsion over her support for a group, now banned by the party, over its record of denying or downplaying antisemitism.

Other JVL members, including senior officials, have faced investigations by Labour over comments made relating to antisemitism.

Elsewhere in the interview with the Trotskyist group Alliance For Workers Liberty‘s website, McDonnell expressed support for those in Israel “courageously and heroically standing up for basic human rights, and standing in solidarity with the Palestinians.”

He added:”I have nothing but admiration for them – for instance the young people who have refused to serve in the army and been jailed. We have to support them. More broadly there have been a number of initiatives for peace and democracy that I’ve met with and supported.”

McDonnell also repeated his claim to be a ferocious opponent of antisemitism.

He said: “On the issue of antisemitism, I’ve said it time and time again: one antisemite in the Labour Party is one too many. Jeremy has said that too.

“You have to recognise what the horrendous impact of antisemitism is on individual Jewish people and on the Jewish community overall. I’ve tried to take a really strong stance on this and actually faced some criticism on the left for that.”

He also defended his and Corbyn’s record on the issue, while they led the Labour Party.

“In terms of the disciplinary side, when we were in the leadership, we were undermined by the bureaucracy,” he said.

“I remember meeting after meeting where we were demanding to know why a string of things we’d agreed had not been done. Some things we thought had been done and then found out later they hadn’t.

“It was extremely frustrating. I always pushed for extremely firm action against antisemites and antisemitic behaviour.”

McDonnell also said Jewish people were being treated in the same way Irish people in the 1970s and 80s had been, by people on the left.

“That’s what often happens with Jewish people and that is why I’ve tried to make that comparison,” he said.

“The left has to fight it.

‘To understand it properly a big job of education is needed, for all of us.

“Again, when we were in the leadership some of that was frustrated by the party machine; we probably should have tried to step outside it more.”