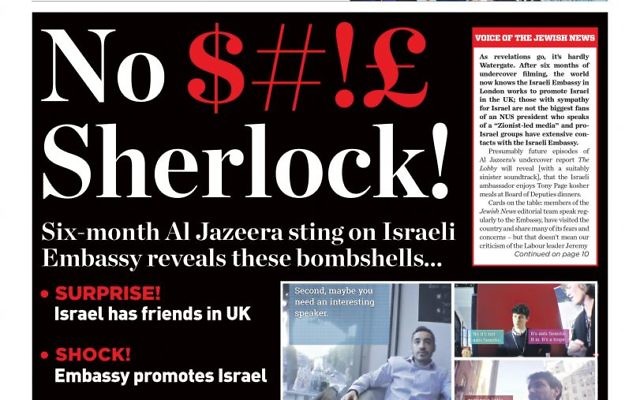 After six months of undercover filming, the world now knows the Israeli Embassy in London works to promote Israel in the UK; those with sympathy for Israel are not the biggest fans of an NUS president who speaks of a “Zionist-led media” and pro-Israel groups have extensive contacts with the Israeli Embassy.

Presumably future episodes of Al Jazeera’s undercover report The Lobby will reveal [with a suitably sinister soundtrack], that the Israeli ambassador enjoys Tony Page kosher meals at Board of Deputies dinners.

Cards on the table: members of the Jewish News editorial team speak regularly to the Embassy, have visited the country and share many of its fears and concerns – but that doesn’t mean our criticism of the Labour leader Jeremy Corbyn or NUS president Malia Bouattia has been dictated by Jerusalem in some clandestine phone call.

So where’s the smoking gun?

At first glance, media reports of the-Jazeera sting about a “plot” to “take down” a British politician appeared to deliver just that. Such comments by any foreign official would be totally unacceptable and Israel is no exception, as the ambassador acknowledged and apologised for.

When it comes to Israel, such language is all the more dangerous because of the inevitability of giving succour to conspiracy theorists who need no encouragement.

But to suggest a chat between friends over dinner amounts to a serious “plot” is patently absurd. It’s no offence to prefer that a particular politician wasn’t in a particular post.

If that’s the biggest ‘revelation’ after six months, Al-Jazeera must privately be wondering if this was worth the time and resources.

If the channel’s grubby little exercise was meant to scare those at the forefront of combatting the pernicious BDS movement or force them into retreat, there’s little sign of that.

But for those who enjoy their conspiracy theories, last weekend’s knee-jerk headlines would have only solidified their views.

If you need further proof of how sloppy, agenda-led broadcasting emboldens racists, look no further than the sick user comments thread on Al-Jazeera’s own website in response to this story. Naked, shameful anti-Semitism, incidentally, the channel took days to delete from its site.