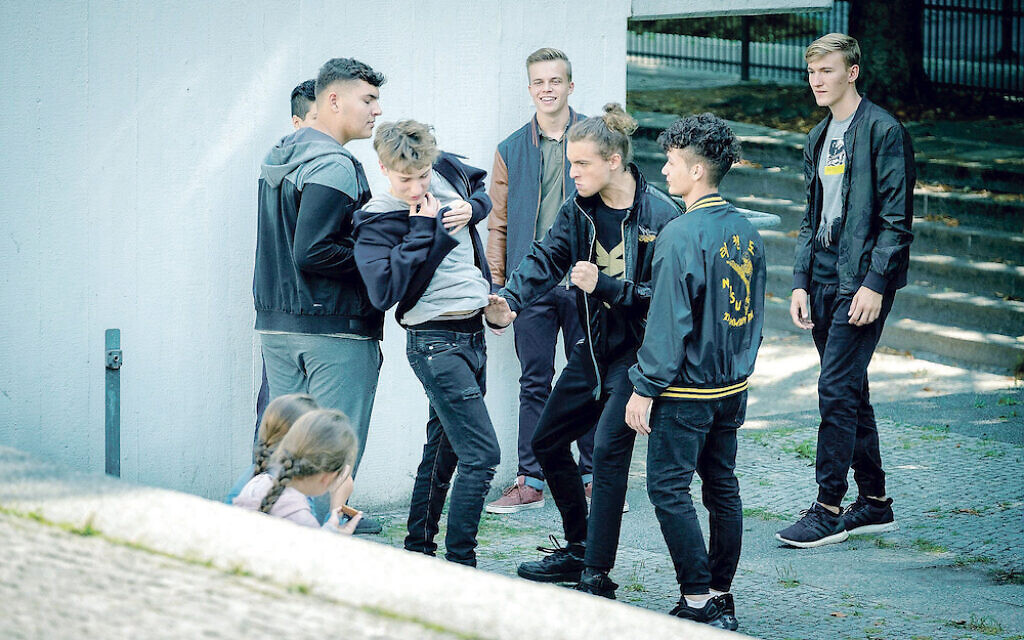 A scene from German film The Un Word, which focuses on modern-day antisemitism in the country

Brace yourself. The UK Jewish Film Festival (UKJFF) is marking its 25th anniversary with a movie that will shape your thinking for some time. As always, UKJFF has a plethora of productions to suit all tastes, but this particular film will goad, enrage and get you talking long after the credits roll.

Cryptically titled The Un Word (Das Unwort, ie a word that can’t be spoken), the film is the definitive conversation starter, particularly in Jewish homes as Russian-Jewish writer/director Leo Khasin has filled it with  every trope and term we despise from ‘Jews run the world’ to the Holocaust being a myth. That this rhetoric is mainly delivered by teenagers in what is essentially a comedy sounds our alarm, but Khasin was on a mission.

“I said no when I was first asked by ZDF TV to make a film about antisemitism in German schools because I didn’t want to be the whining Jew telling just another anti-Jewish story,” says Khasin, who was eight when he left Moscow with his family in 1973 on an Israeli visa.

“There are so many reports and documentaries about the rise of antisemitism already, I told them I wanted to do something different. To wake up the audience with something unfamiliar. Of course, it’s a tragic story. And I was mindful that the story I wanted to tell was true. But it’s fictionalised and I tried to bring some humour while attempting to understand the problem.”

And it is through the laughter teamed with huge discomfort that Khasin’s film lays bare the discords of modern multiculturalism and shines not just a light, but a high wattage solar panel, on the endless fight against intolerance. Play-like and confined to a classroom and hallways, the story revolves around a serious brawl between Jewish student Max (Samuel Benito) and his Muslim classmates Karim (Oskar Redfern) and Reza (Victor Kadam). But when the overwhelmed parents arrive at a peace-keeping summit organised by naïve form teacher Fraulein Ritter (Anna Brüggemann) who places Palestinian and Israeli flags on her gefilte fish and falafel snacks, we know what lies ahead.

“Some teachers are unable to recognise antisemitism,” sighs Khasin, who has three children aged 10, 14 and 16.  “I met a lot of teachers who were brave and acted decisively when students were bullied in an antisemitic way, so this film is not fair to them. But in many cases there is a lack of sensitivity, empathy and interest.” 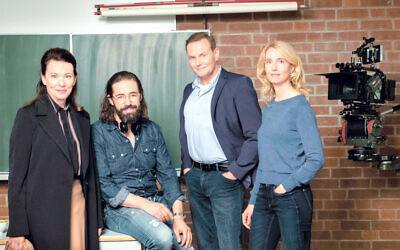 Russian-born Jewish director Leo Khasin, second left, with some of the cast of The Un-Word

Through extensive research and interviews, Khasin came to understand the sad reality of school life in Germany.

“They are avoiding the truth because the truth isn’t nice. In a school with 200 Arab students and only five Jewish students, it’s easier to expel the Jews experiencing antisemitism than deal with the problem.

“My oldest child was at a normal public high school until 10th grade and the antisemitic experienced was subtle from German students making jokes about the Holocaust. And they would say, ‘It’s just a joke, we don’t mean anything by it.’

“She felt embarrassed, but stayed strong and they didn’t hurt her that much. But now she is at a Jewish school where 50 percent of the kids are Jewish.”

Khasin is also reluctant to point the finger at the Middle East conflict as another conduit for hate. “It’s too easy to blame all the hatred on that; it’s a mix of everything, but I blame German society. You know, if you really stand up for a minority, if you really think and feel with the Jewish people, then this wouldn’t happen.”

Khasin supports his damning indictment of educators’ attitudes in his adopted homeland with another true story of a Jewish boy bullied at a school in Friedenau.

“The parents went to the press and there was a media outcry, but the headteacher, much like the one in my film, claimed to run a school that was against racism. He couldn’t help it if there were antisemitic attacks! Behind such an attitude, there is often a school principal who doesn’t really care about Jewish students and it’s better when they are gone.”

For all his criticism and concern, Khasin loves Berlin, its international population and his question about where a Jew should live in the world is rhetorical. “That’s the paradox,” he says, but admits he would also like to see Jewish life perceived differently in Germany.

“To not always be portrayed as victims, but rather understood as part of a culture that is allowed to remain independent. People dance around the word ‘Jew’. They don’t dare to say that because they think it’s a dirty word.

“That can only change when there is normalisation. In Germany, one always expects a culture to assimilate and become German. That should not be. When Germans understand we are a multicultural society and not a society of guest workers or quota refugees, then things will change.”

• The Un-Word is available to stream from tomorrow until 8 November at
https://watch.eventive.org/ukjewishfilm