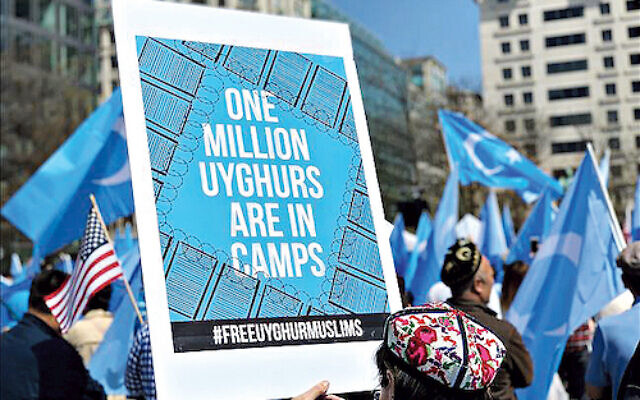 A striking series of measures with which to challenge the Chinese government about its genocidal treatment of its Uyghur Muslim minority was outlined at a unique conference on Sunday, partnered by Jewish News.

The three-panel conference, under the overall banner of “From Anguish to Action”, was an intensive Jewish community initiative in support of the Uyghur people.

Chaired by Hendon’s Magen Avot minister, Rabbi Joel Kenigsberg, the event featured a variety of speakers, from Chief Rabbi Ephraim Mirvis, to politicians such as Sir Ian Duncan Smith, and those intimately connected to the Uyghur struggle such as campaigner Rahima Mahmut, who has been cut off from her family and friends since 2017.

The event was held under the auspices of Magen Avot Synagogue and a number of United Synagogue congregations.

Ms Mahmut spoke of the distressing activities carried out by the Chinese authorities against the Uyghur people, from forced labour to forced sterilisation of women, rape and even organ harvesting. The overall aim, she said, “is to break our lineage, our language and our roots”.

The Leeds cleric, Imam Qari Asim, reminded viewers of the conference, which took place on the United Synagogue’s TV channel, that the discussions were taking place on the 26th anniversary of the massacre of 8,000 Bosniak Muslims in Srebrenica. “It is considered the greatest atrocity to take place on European soil since World War Two — but the world must not fail the Uyghur Muslims as it did with Srebrenica”, he said.

Activist Benedict Rogers, an adviser to the World Uyghur Congress, spoke of the importance of bringing the issue to the forefront of interfaith work, adding that the plight of the Uyghurs would be raised at the upcoming international religious freedom summit in Washington DC. But he regretted that so far there had been no public statements from either the Archbishop of Canterbury or Pope Francis.

QC Henry Grunwald OBE, president of World Jewish Relief, is himself the son of a refugee, allowed into Britain a month before the outbreak of the Second World War. He was not the first among the speakers to draw parallels between the genocide perpetrated against Jews 75 years ago, and that carried out against the Uyghur by the Chinese today. But for those still wondering why the Jewish community should be involved in the issue, Mr Grunwald’s message was clear: “Then, we helped refugees because they were Jewish. Now, we help refugees because we are Jewish. We recognise our responsibility to those in need”.

Mr Grunwald said there were 10 “classic” stages of genocide, always followed by denial. “Condemnation is not enough”, he declared. “Our religion unambiguously advocates that to be a bystander in the face of human suffering is tantamount to perpetrating injustice yourself. Inaction is not an option for us as Jews”.

After outlining some of the work done by World Jewish Relief to help Uyghurs who had fled to Turkey, Mr Grunwald raised the issue of potential Uyghur asylum seekers to the UK. “UK law at present makes it an offence for someone who knowingly, and for gain, facilitates the arrival of entry, or attempted entry into this country, of an individual whom he has reasonable cause to believe is an asylum seeker”.

But, he said, Britain’s proposed Nationality and Borders law, presented by the Home Office, sought to move the vital words “and for gain” from the Act, “So a law, aimed at people-smugglers, would make it an offence for anyone who not for gain, aided or facilitated the entry of an asylum seeker. This would mean that the late Sir Nicholas Winton, who facilitated the arrival of many Jewish children here on the Kindertransport, could have been criminalised. And that any of us, because it is the right thing to do, who facilitated the entry of a Uyghur asylum seeker into the UK, could have committed a criminal offence”.

Mr Grunwald hoped very much that the crucial words “and for gain” would be retained when the bill was presented to parliament.

Another QC, Rodney Dixon, is acting for Uyghur victims and has been instructed to pursue a case against the Chinese government in the International Criminal Court in The Hague. Mr Dixon spelled out the process whereby the ICC could investigate the alleged crimes of genocide, leading to an eventual prosecution.

He said: “What is happening to the Uyghur Muslims has ominous echoes of what happened in the Second World War when Jewish people were rounded up in countries across Europe and forced against their will into Germany, where they were then targeted and exterminated. This is a common element of a well-planned genocide and crimes against humanity”.

The former leader of the Conservative Party, Sir Iain Duncan Smith, is one of the founders of IPAC, the Inter Parliamentary Alliance on China, which now operates in 20 countries and has 200 members. “The Chinese government is not one which cares very much what people think or say about it”, he said, “and it has now become almost the plaything of President Xi. Their intolerance and their desperate behaviour is affecting hundreds of thousands of lives in China and beyond”.

He described “the terrible persecution of the Uyghur” as “a racist act, a shocking thing to behold. They are being literally exterminated by act of government”. He paid tribute to the Jewish community for “going above and beyond” what had to be done to bring the situation of the Uyghur front and centre on the agenda of Western governments. He had told his Parliamentary colleagues: “We should remember that the same excuses were being made in the 1930s [about Germany]”.

Denouncing the many and varied genocidal acts which he believed were being perpetrated against Uyghur, Tibetans and Inner Mongolians, Sir Ian took the unusual step of admonishing his own government for Britain’s “utter dependence” on China and Chinese products. “The West has kowtowed to China: we need to stop. We can no longer turn a blind eye. Opening up the markets has not turned China into a democratic country which understands the rule of law and human rights”.

Unlike Sir Ian, the director of the Henry Jackson Society, Dr Alan Mendoza, did believe the Chinese government could be embarrassed and did care about international humiliation.

He highlighted the issue of the forthcoming Beijing Olympic Games, scheduled to take place in China in winter 2022. While there was discussion about whether Britain should send its official representatives to China, Dr Mendoza argued that the absence of government ministers “at a few receptions and cocktail parties” was not meaningful and would have no effect. He insisted that sending athletes at all would signal “normalising” to the Chinese, and urged that Britain and other Western governments should boycott the entire event.

America’s former ambassador at large to the UN, Kelley Eckels Currie, joined the conference by video link and outlined actions which could be taken both at the government and individual scale. Mostly, she spoke about economic actions, including, for individuals, actively seeking not to buy products made in China. The Chinese, she said, “have to recognise there are costs to their behaviour.”

But, while like other speakers she welcomed the initiative and support of the Jewish community in campaigning for the Uyghur minority, she flagged the fact that, to date, no country with a Muslim majority had spoken out against the Chinese. She urged these countries: “Stop providing cover for China”.