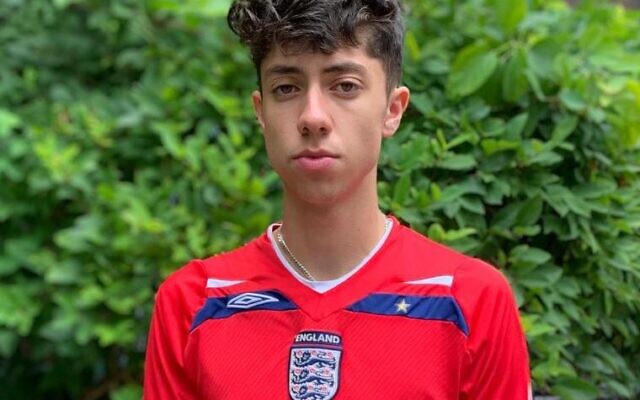 A Jewish schoolboy was ejected from the Euro 2020 final at Wembley despite having a valid ticket, after he was “shoved” through a turnstile by a hooligan.

Jonathan Kobrin, 17, from Hampstead told The Times of his ordeal on Sunday night, explaining how he had already scanned his pass before stewards kicked him out.

The teenager was given a ticket by his parents and arrived at the ground at 5pm amid chaotic scenes, with thousands of supporters outside the home of English football – many without access to the game.

Ahead of the final of Euro 2020 between England and Italy, the Metropolitan Police warned supporters without tickets not to travel to Wembley due to crowding.

Videos later emerged of supporters forcing their way into the ground, and an investigation was launched by UEFA, Europe’s sporting authority.

He told the Times: “I had my ticket ready. There was no one behind me but as soon as I had scanned my ticket and it went green I was shoved through the turnstile and he essentially pushed me through with it.” He explained that stewards “grabbed me by the arms and threw me into this room” before he was evicted, alongside the individual who pushed him through the turnstile – who was also eventually also kicked out.

An FA spokesperson said: “We will carry out a full review and investigation into the events that took place at Wembley Stadium before and during the UEFA EURO 2020 Final. This will be done in collaboration with the Police, the Greater London Authority, the Safety Advisory Group and the tournament delivery stakeholders.

“Security and stewarding numbers for the UEFA EURO 2020 Final exceeded the requirements for the match and were greater than any other previous event at Wembley Stadium. However, the behaviour of the people who illegally forced their way into the stadium was unacceptable, dangerous and showed total disregard for the safety and security protocols in place. No steward or security staff should be subjected to this type of behaviour and we thank them for their support on the night. We also apologise to anyone at the match whose experience was affected by this unprecedented level of public disorder.

“We will continue to work with the relevant authorities to identify and take action against these people where possible.”

The FA did not comment on the individual incident.

Kobrin’s family declined to speak to Jewish News but confirmed he is Jewish.