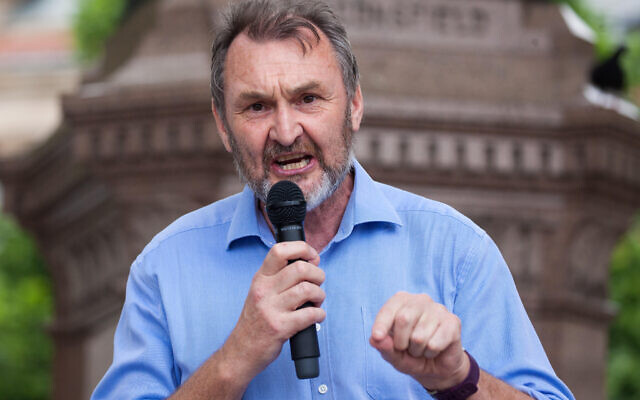 Dozens of Jewish teachers and school staff have resigned or are threatening to quit the major educational trade union in protest at its one-side stance on the conflict between Israel and the Palestinians.

Kevin Courtney, joint general secretary of the National Education Union (NEU), said he was “proud” to speak at last Saturday’s pro-Palestinian rally in central London – at which antisemitic chants were made and inflammatory anti-Israel banners held aloft.

The NEU’s most recent statement on the conflict failed to condemn Hamas for firing thousands of rockets into Israel and instead said “we recognise that the recent conflict was sparked by the unlawful evictions of Palestinian families in the occupied East Jerusalem neighbourhood of Sheikh Jarrah and the attacks by Israeli forces on the Al-Aqsa mosque.”

His appearance was the final straw for numerous Jewish members of the union who confirmed to Jewish News that they had resigned this week.

Dozens more said they were considering resigning, citing a long record of anti- Israel action by the union.

Jewish News understands that up to 80 teachers and school staff members have voiced anger at the union’s position on Israel in private forums in recent weeks.

There has even been informal talk of attempting to relaunch a Jewish teaching union.

Ronit Loewenstern, an NEU member, confirmed she had now resigned from the union because the General Secretary did not represent her views around Israel and the conflict in the Middle East.

“Kevin Courtney, gave a speech in support of the Palestinians outside the Israeli Embassy,” she said.  “How dare he!

“We pay our subs. We are members of this union. He does not represent our views. He should be called to account.”

Loewenstern revealed she is in contact with a group of Jewish members of the union who were all taking similar action.

Messages placed on a community Facebook group also revealed the depth of anger amongst Jewish teachers about their union’s stance.

One post read:”I resigned yesterday after the awful anti Israel and antisemitic articles and adverts in their magazine. I couldn’t take it anymore.”

Another wrote:”I’ve just cancelled my NEU membership and joined NASWT.”

Two years ago the NEU blamed an error after Jewish members reacted furiously when it appeared to endorse a boycott of Israeli businesses in its official magazine.

Asked to comment on the departure of Jewish members an NEU spokesperson said:”The UK marches and rallies were attended by thousands of trade unionists from across the spectrum of TUC unions.

“The NEU Joint General Secretary was one of several speakers at the London march/rally from UK unions. In addition to his NEU role, Kevin Courtney is the international spokesperson for the General Council of the TUC.

“Both the NEU and the TUC have issued statements about the evictions at Sheik Jarrah and subsequent developments, as have many other unions. The UN has also voiced concerns.

“The NEU speaks out against all forms of racism including antisemitism.

“Policy in support of affiliation to the Palestine Solidarity Campaign has been agreed democratically at annual NEU conferences and at TUC Congress.”