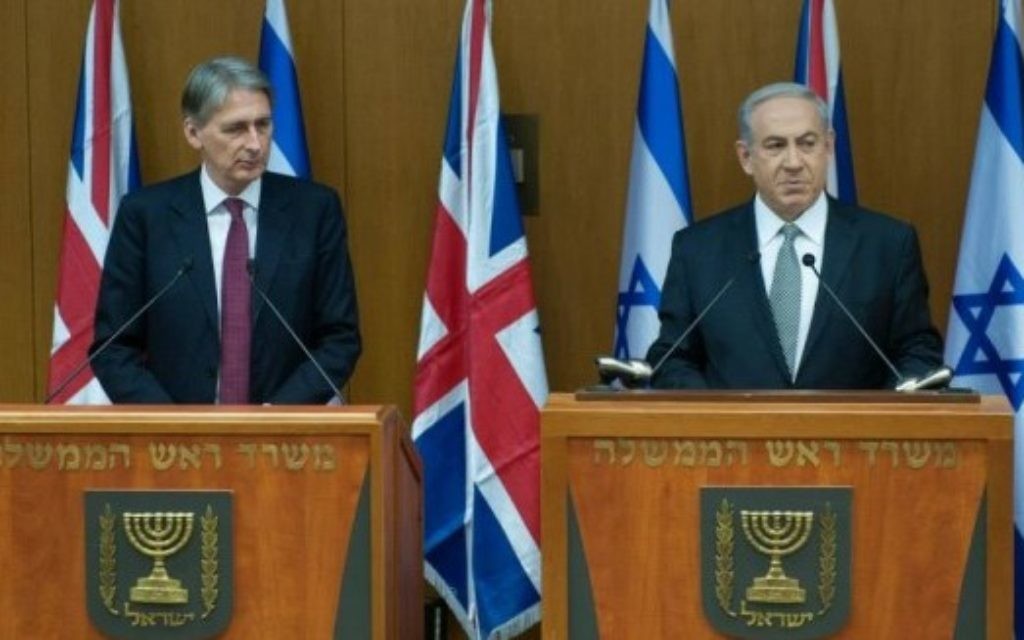 The Foreign Secretary has spoken of international concern over “what looks and feels like a deliberate attempt to sabotage the two-state-solution” by Israel as he said he would seek urgent clarification over Benjamin Netanyahu’s comments ruling out a Palestinian state.

Philip Hammond acknowledged he had been left “exasperated” by moves from both the Israelis and Palestinians over recent years, during an interview with the Jewish News as Israelis voted in a general election on Tuesday afternoon.

His strikingly candid comments – before official results gave Likud a clear victory – underscores the sense of frustration in the international community at the lack of progress on a solution and the pressure a fourth-term Netanyahu administration is likely to come under.

Britain was ready to work with whoever forms the new Government but the international community wanted to see movement towards a settlement this year, Hammond said before a public question and answer session at Hendon United Synagogue.

The former defence secretary – who spoke of the abuse he suffered after standing up for Israel’s right to defend itself during the summer conflict with Hamas – added: “The window [for a two-state solution] is closing because of settlement patterns as much as anything else. If we see restraint in terms of not settling new areas, areas that are critical to the coherence of a two-state solution the window will be a bit bigger. But it’s I’m afraid what feels and looks like a deliberate campaign of trying to sabotage the delivery of a two-state solution that is causing most concern over the past couple of years. For many people that’s what it looks like.

“Many of my European colleagues are becoming incredibly frustrated by the process. They want to support Israel but they need something back in return. They need some clear sense that Israel is at least willing to try to find a two-state solution. To be brunt it’s only the really robust position that Britain and Germany take that has held the line from seeing the EU questioning more the position we collectively take.”

In a last-ditch appeal to right-wing voters with the polls still pointing to a victory for the Zionist Union on Monday, Netanyahu said there would be no Palestinian state while he served as premier. Hammond said he hoped the remarks could be seen “in the context of a man who is behind in the polls”.

But Hammond added: “If he leads the next Government, we would expect him to recommit to a constructive engagement around the principle of a two-state solution. We would expect that but the United States would expect that – and that’s an influence no Israel prime minister can afford to ignore.”

Reports in recent months have suggested the EU were drawing up sanctions in response to settlement activity but Whitehall sources told the Jewish News there are currently no such plans.

But Hammond warned that failure to make progress could see other European countries following Sweden’s lead in unilaterally recognising a Palestinian state.

Despite the gloom felt by his detractors at the prospects for peace under Netanyahu, Hammond suggested an engaged Likud leader could be better place to deliver a deal than his rivals. “Often it’s those who look least committed to a course of action that are most able to deliver ii. If Herzog were to form the next government he would come with an agenda which on the face of it appeared more open to forward movement on a settlement. He might actually find it more difficult to deliver. Netanyahu, if he was really committed to doing something, may find it easier to bring that to fruition.”

A solution to the conflict between Israel and the Palestinians, he claimed, could also lead to more Arab states working in lockstep with the Jewish states to tackle their common concerns over Islamist terror.

Turning to Iran, Hammond – fresh from direct talks with foreign minister Zarif in Brussels the previous night – suggested it would require a “heroic leap” from Tehran to secure a deal in the coming weeks but said their final position wouldn’t be clear until the eleventh hour.

“We have closed the gap in some areas partly because Iran has taken a more realistic view, partly because technical experts have been able to get to a point where we can turn into numbers some of the concepts we’ve been talking about, he said. “But there are other areas where we’ve still got a huge gap. We see some signs there is a genuine desire to do a deal. But what we don’t know if whether they can go far enough to meet our red lines. We know what is an acceptable deal and what is a bad deal. We’re not going to do a bad deal. No deal is better than a bad deal. If the Iranians cannot meet us there won’t be a deal.” He later told the audience at Hendon United that all options would remain on the table if Iran should renege on any deal.

Addressing Israel’s concerns about a potential time-limit on restrictions to the nuclear programme, he acknowledged “the world isn’t made up of perfect solutions”.

But he insisted that opening up the country to the world and getting its economy back on track would “fundamentally change the way the country works. Resolving the nuclear question is the first part of the process of opening Iran up to external influence and getting Iran to become an engaged and constructive part in the region again”. In the meantime, he vowed, the country would not be given a “free pass” in terms of its other activities in the region.

On other regional matters, he said the Government did not believe Qatari state funds were supporting terrorism though could not provide a “cast iron guarantee” that individuals from that country were not backing illegal activity.

Local MP Matthew Offord, speaking alongside the cabinet minister at Hendon United, said he didn’t share every view expressed by Hammond on the Israeli-Palestinian conflict but hailed the strong position taken by him and his cabinet colleagues during Operation Protective Edge.