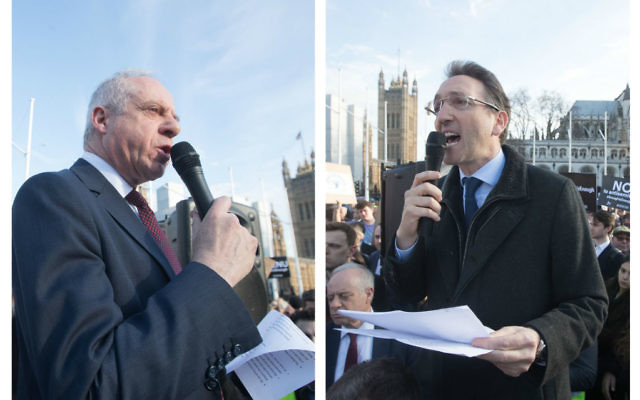 Jewish community leaders have insisted they will continue to hold Jeremy Corbyn to account, after holding a demonstration against Labour anti-Semitism on Monday.

In joint statement on Tuesday from Jonathan Goldstein, Chair of the Jewish Leadership Council and Jonathan Arkush, President of the Board of Deputies of British Jews, they note the Labour leader’s apology in response to their letter conveying community concerns, but add that “words are no longer enough”.

Their call for “action” from Corbyn response comes after more 1,500 gathered in Parliament Square on Monday to protest against his inaction over tackling Jew-hatred in the party.

Before the event, attended by numerous Labour MPs, a letter signed by Board and JLC leaders was handed to Parliamentary Labour Party chair John Cryer, ahead of the weekly meeting of MPs..

The joint statement praised the impact of Monday’s demonstration, which saw “thousands of people from our community and far beyond came together in Parliament Square to tell Jeremy Corbyn and the Labour Party leadership that Enough is Enough”, at just 24-hours notice.

They add: “We note Jeremy Corbyn’s apology but we are almost three years into his leadership and words are no longer enough – now we need action. The Labour Party must finally demonstrate that it has the genuine will and determination to act effectively against the hate in its membership. We will not be silent and we will continue to hold it to account.”

A leading Jewish Labour peer has urged community not to accept invitation to talks until they see concrete action – while Lord Mendelsohn, President of the Commonwealth Jewish Council, praised the Board and JLC “for their courage and leadership to confront anti-Semitism”.

He urged the community “to hold firm and wait for Labour to demonstrate that it is prepared to change by a concrete show of its determination to expel those guilty of using anti-Semitism, and evidence of a clear plan of action to address anti-Semitism in the Labour Party.”

“This must go far beyond the feebleness of the Chakrabarti report which has done nothing to stop hate in the party and whose further adoption would make little difference.”

Lord Mendelsohn added, that he attended a meeting with Corbyn, organised by Wes Streeting a few years ago which strengthened his views on the Labour leader’s approach to tackling anti-Semitism.

He said: “His disinterest and dismissal of the problem will live with me forever. All those who have tried to defend him in public were not at that meeting and I do not believe that anyone who was there could ever do so. If he had taken it seriously then we would not be in the position we are now. And I fear there is a deeper reason in the darkness of the politics of his supporters that needs to be tackled and he – if he is serious – must do this.

“So job one is to take on those people who denigrated the issue, the protest and the messengers. Let’s see him start on that before we can judge the integrity behind the most recent statements.”