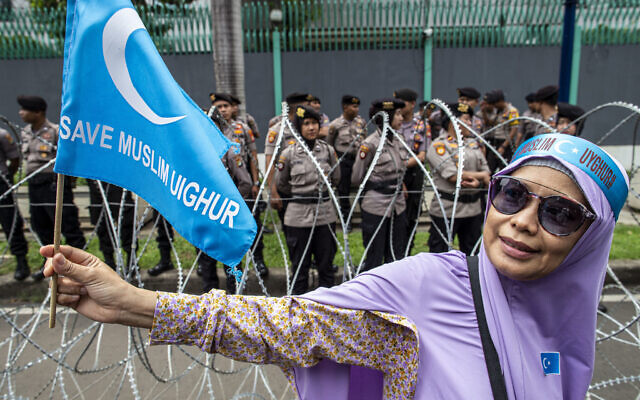 Jewish leaders urged the community to “stand up” on Monday as they heard from an exiled activist seeking to raise attention to the plight of an estimated 1 million Chinese Muslims thought to have been detained in China’s Xinjiang region.

World Uyghur Congress president Isa Dolkun met a dozen Jewish leaders, including from synagogue movements, the human rights group Rene Cassin and the Orthodox youth movement Bnei Akiva in an event in North London hosted by the Board of Deputies.

Around one million people are believed to have been detained without trial in camps in western Xinjiang, according to human rights activists. But Chinese authorities deny any mistreatment of the Uyghurs and other Muslim minority groups, saying the detention camps offer vocational training.

Speaking after the event, Board of Deputies vice president Amanda Bowman urged the Jewish community to condemn China’s treatment of Uyghur Muslims.

“In the week that we are marking Holocaust Memorial Day and the liberation of the most notorious concentration camp, it is intolerable that the Uyghur Muslims are being persecuted on this scale. It is the responsibility of all of us in the Jewish community to stand up and make our voices heard in their support,” she said.

Rabbi David Mason, of Muswell Hill synagogue, who was among religious leaders in the meeting, urged communities to “spread the word” and take a stand against racism.

“We’ve always talked about ‘never again’, and those words are now hollow words, and they don’t mean anything if we’re not willing to have our voice heard when we recognise the type of othering, the type of racism against other groups that we know as Jewish people have experienced,” he said. 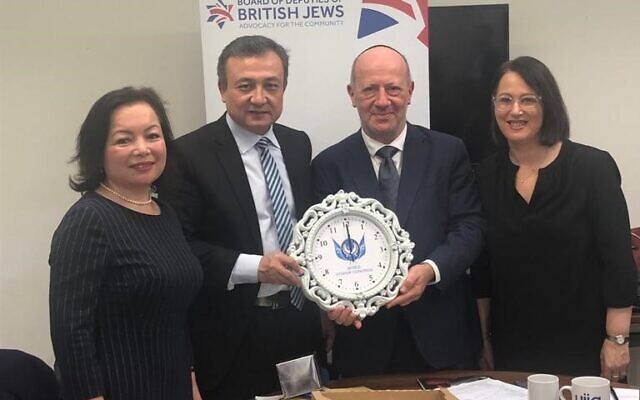 Pictured from left to right, the World Uyghur Congress’ Rahima Mahmut and Dolkun Isa with Board of Deputies vice presidents Edwin Shuker and Amanda Bowman

Speaking to Jewish News during Holocaust Memorial Day, Dolkun stressed the importance of the international day of commemoration and urged world leaders to heed the lessons of the Holocaust.

“75 years ago, the Holocaust was happening, and world leaders and the whole world promised ‘never again’. But unfortunately, it is happening again 75 years later in China,” he said.

“So that’s why every human being should stand up and break the silence against the Chinese government,” he later added, claiming Beijing seeks to “eradicate” Uyghur identity and calling it a “crime against humanity.”

Dolkun is now based in Munich. He said he has never seen some relatives who live in China again since fleeing the country 26 years ago.

The Uyghur activist said he received “heartbreaking” reports that both his parents died in China – but that he did not have any further details.

He said he received reports his mother died in a detention camp in May 2018 at the age of 78 and that his older brother was sentenced to 25 years in prison on charges of being a “separatist.”

Up to thirty people are forced to share a room with just one bucket for a toilet and detainees must take turns sleeping due to the cramped conditions, Dolkun said.

Former detainees have made similar allegations in the past, such as Sayragul Sauytbay, a Kazakh Muslim woman who spoke to Haaretz last year.

Dolkun was joined at the event by Rahima Mahmut, the UK’s WUC spokesperson, who is due to speak at a parliamentary event on Thursday organised with the Board of Deputies and sponsored by the SNP MP Lisa Cameron.

The event, open to the public, will be chaired by Board of Deputies chief executive Gillian Merron and feature speeches by senior Reform rabbi Laura Janner-Klausner and Board of Deputies vice president Edwin Shuker.