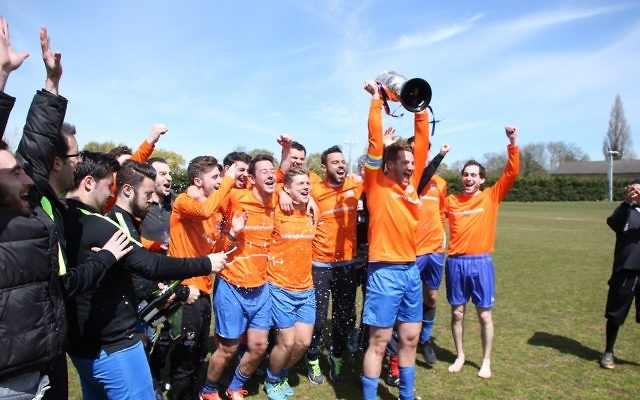 Maccabi football league’s biggest night of the year has been scrapped due to a disappointing turnout over the past few seasons.

League chairman David Wolff confirmed the traditional end of season awards evening had been cancelled due to a low number of attendees, at Monday night’s league management committee meeting.

A new format and arrangements have been put in place, which will see medals and trophies handed out on the pitch instead of EDRS, the venue which had hosted the event.

The three title winners will now be presented by a member of the Management Committee on the pitch, with medals for the runners-up to be given out, in bulk, possibly prior to the AGM or if practical, at a match. Individual awards for players of the year will also be made pitch side, organised by prior arrangement, while the Team Secretary of the year and Sportsmanship Turnout Trophy will be made at the AGM.

Managers were mostly in agreement with the league’s decision. L’Equipe player-manager Nick Stern said: “After only being able to attend once in our ten-year existence sadly it has little impact on us. However, if we were to win a trophy, we would want to celebrate with our own team, family and friends and by giving the trophy and medals at the end of the game, this will allow it to happen. We would be able to celebrate with more people that we care about rather than in front of others teams or worse, a tiny audience at the end of the season. I applaud the committee’s decision but strongly recommend re-using the funds that ultimately get wasted on the end of season ceremony in making in cheaper for teams to participate.”

Oakwood B manager Jason Stein voted for the move in his capacity as fines secretary. He said: “I believe handing out the trophy to the champions on the day of their triumph will make winning the league an even more special day. It’s right that the MGBSFL always puts the interest of its member clubs first and we believe this is what the dedicated managers and players, who are the lifeblood of the league, have come to expect for winning the title.” Oakwood A joint-manager Daniel Kristall echoed his sentiments, saying: “It’s definitely best to hand out on the day of the achievement.”

Lions B manager Samuel Marchant said: “Being a young manager, last season was my first experience of the end-of-season awards evening and it was disappointing to see such a small turnout, with that in mind I see no reason why there should be a formal awards evening.

“It’s something that is nice and I would like to see return one day, but for all those who don’t win anything, there is a lack of incentive for them to be there and support the other teams. It also appeared that teams who did win awards only sent a few representatives. A lot of this relates back to the decreasing trend in participation in the league over the last five/six years, which as we know is for a multitude of reasons. It’s sad to see the evening disappear from our calendars, however for the boys to receive their trophy and medals pitch-side straight after their achievements will be a very nice feeling too.”

However, Redbridge B player-manager Sam Rank expressed his disappointment that they will now longer be taking place. He said: “The title winners work hard all year and should be rewarded with an end of season awards event. Teams, especially who finish second in their league, don’t want to turn up, which is very disrespecting to the league. The only suggestion I have is the AGM and awards night are joined together.”