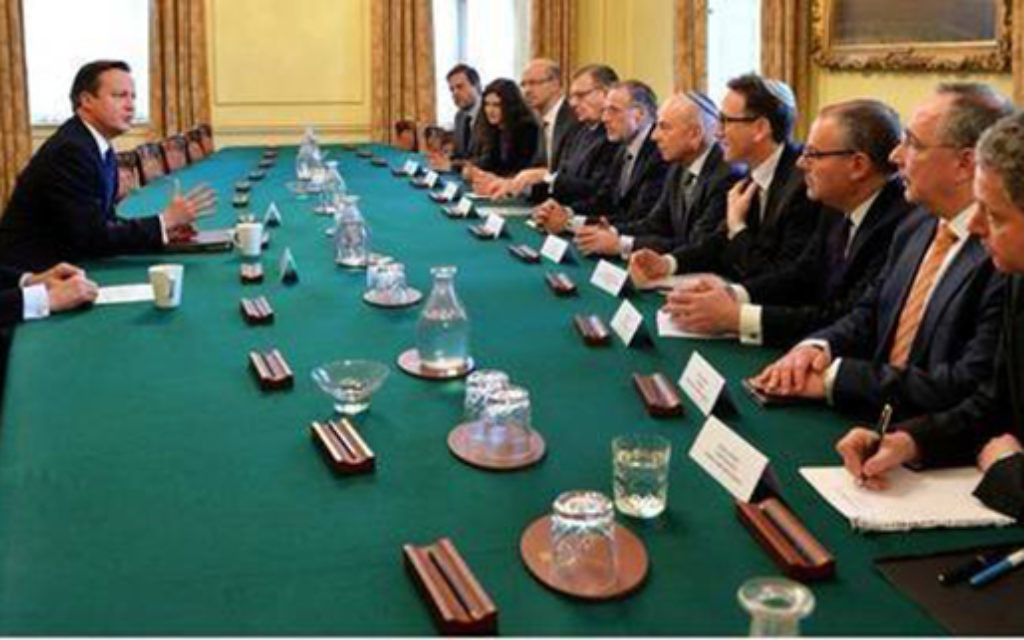 PM David Cameron and jewish leaders discussing priorities for the community in 2015.

PM David Cameron and jewish leaders discussing priorities for the community in 2015.

Extra money from donors will help a Jewish charity in London provide language and employment training to Syrian refugees entering the UK, in a move heralded by the government.

Announcing the nationwide initiative at a Downing Street meeting with Prime Minister David Cameron, World Jewish Relief said it would bring its experience to bear, since it already offers employment services in Eastern Europe.

Fresh from raising £820,000 for aid to refugees in Turkey and Greece, several philanthropists offered additional funding for an employment programme in the UK, allowing the internationally-focused charity to operate in the UK.

“Jewish refugees of old will help Syrian refugees of today to integrate into British society, as our forebears did, and make the UK their home,” said Sir Mick Davis, chairman of the board of trustees of the Jewish Leadership Council.

Thousands of Syrian refugees have fled the country, including injured fighters and children.

“Love the stranger, for you were once strangers – this has been a Jewish principle for generations. Our community knows better than most what it is like to arrive empty-handed in a new land, learn a new language and adopt a new culture, and then to seize the opportunity to succeed, and give back to British society.”

Volunteers will work in the areas where refugees settle, with Birmingham, Bradford, Coventry, Glasgow and Leeds all currently under consideration, and focus on offering practical help.

“As we do in Ukraine and Moldova, we will connect refugees with Job Centres and local employment providers,” said a WJR Campaign Manager Richard Verber, confirming that the charity will offer a “personalised service” to 1,000 refugees.

“We’ve consulted widely, both locally and with employment providers in the Jewish community, to help translate our Eastern Europe expertise for the UK market. English language support will play a part.”

WJR chief executive Paul Anticoni said the community’s response to the refugee appeal was “enormous and heart-warming,” but said: “We couldn’t ignore the volume and intensity of calls to bring that work to the UK, to support some of the 20,000 Syrian refugees who will be arriving here over the next five years.”

Verber added that the charity will be funding employment specialists based within the integration services” but would adopt an individual approach.