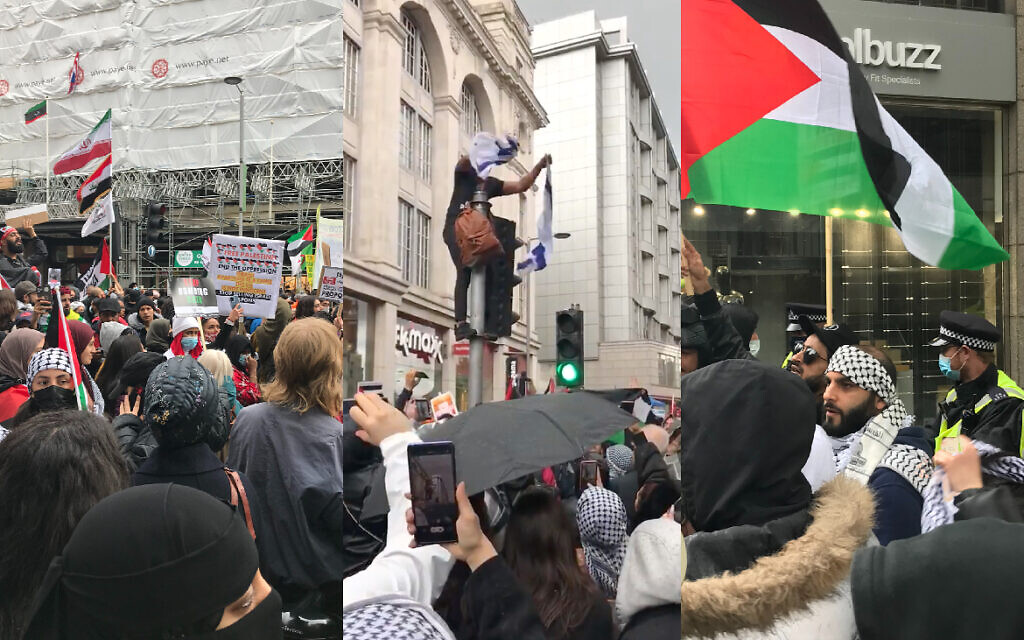 Protestors in London ripped up an Israeli flag, compares Zionism to Nazis, and called for the end of the Jewish state

An Israeli flag was ripped apart at pro-Palestinian march in central London on Saturday.

Only a heavy rain shower had prevented the flag from being set alight after a man climbed onto a traffic light close to the Israeli embassy in Kensington, west London.

The Palestine Solidarity Campaign claimed over 100,000 joined the demo to protest against what they called the “brutal” violence against the Palestinian people.

Jewish News spoke to some of those who decided to attend the protest, which saw banners calling for the destruction of Israel help aloft by thousands. 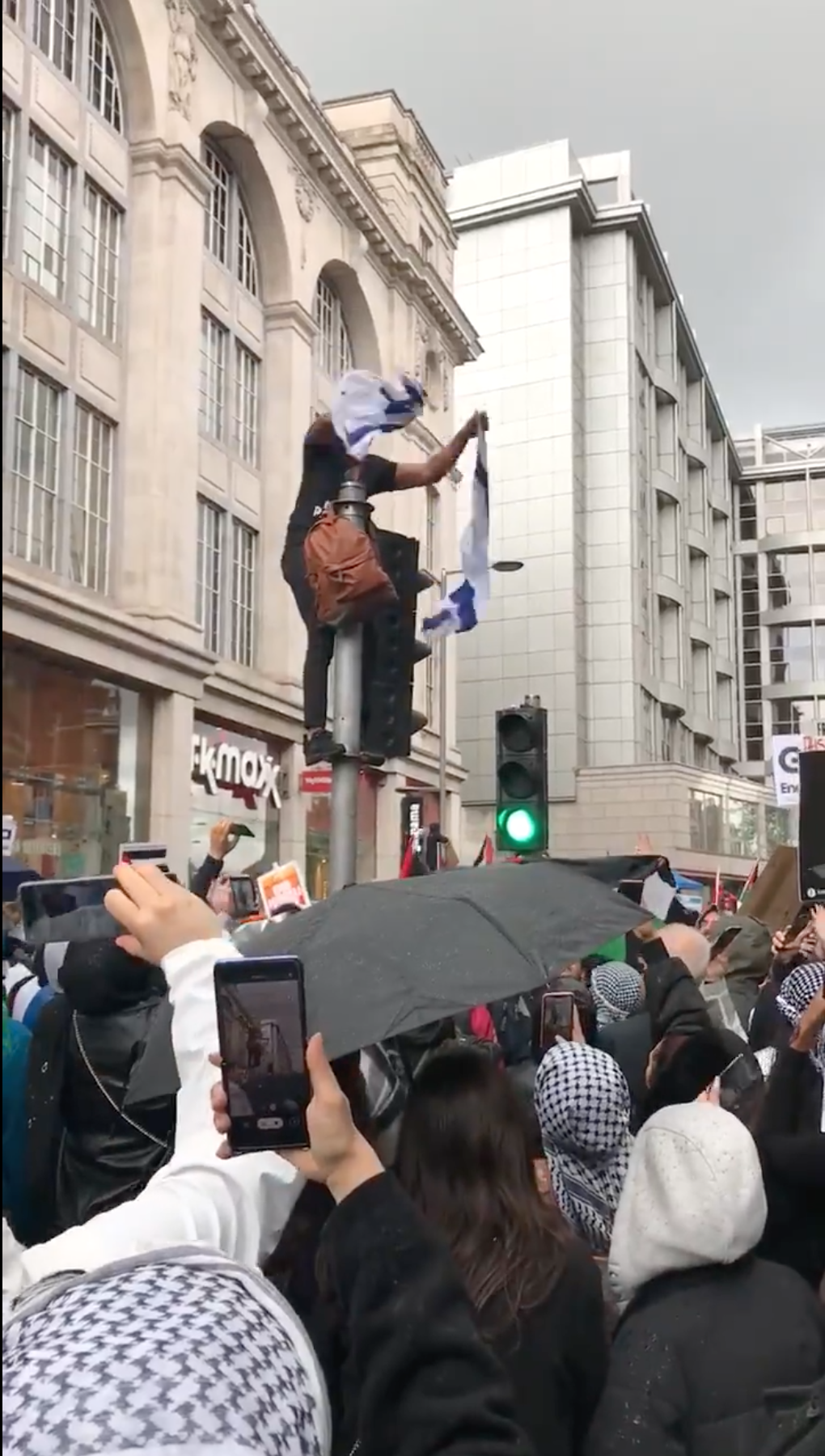 One male had wrapped himself in a flag which openly equated Zionism with Nazism.

Asked why he believed Zionism was Nazism the man initially said: ”I don’t know – you will have to ask the organisers.”

But he then added: “It is not antisemitism.  Zionism is not Judaism.”

Watch the moment a protestor rips up an Israeli flag, after failing to burn it as it rained:

Demonstrator on the ⁦@PSCupdates⁩ demo in London rips apart an Israeli flag after failing to set alight in the rain. pic.twitter.com/shWXHjbQuO

“We’ve waiting too long for that to happen” said one of the two woman, both of whom wore the hijab  “That would need the oppressor to stop oppressing.

Asked if they believed Jews would be safe in a one state, Palestine both woman said they felt they would.

“Look what happened before there was Israel,” they said. “Jews and Muslims lived in peace. It is Zionism that has caused this.” 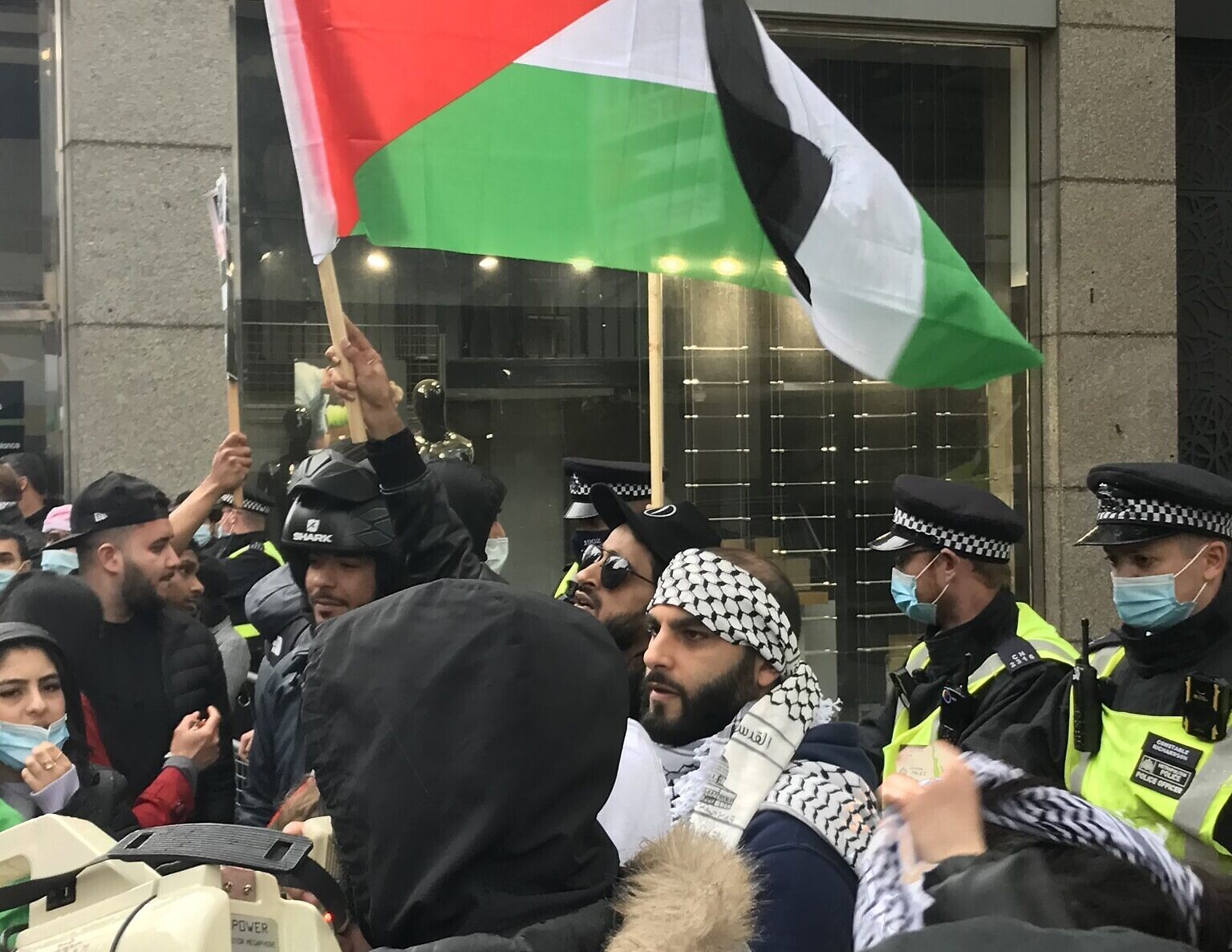 Four Muslim males from Slough are also keen to stress, after I identify myself as being Jewish, that they do not believe this to be a religious conflict.

Like so many on the march they are convinced they are not antisemitic and instead object only to Zionism.

“Jews who are not Zionist, they could live in peace in one Palestine,” says one of the males.

Asked about their view of Hamas and the fact that the terror group who aimed to kill and maim innocent Israelis, all four say they do not support the militants.

At the #FreePalestine demonstration in London today cries of: 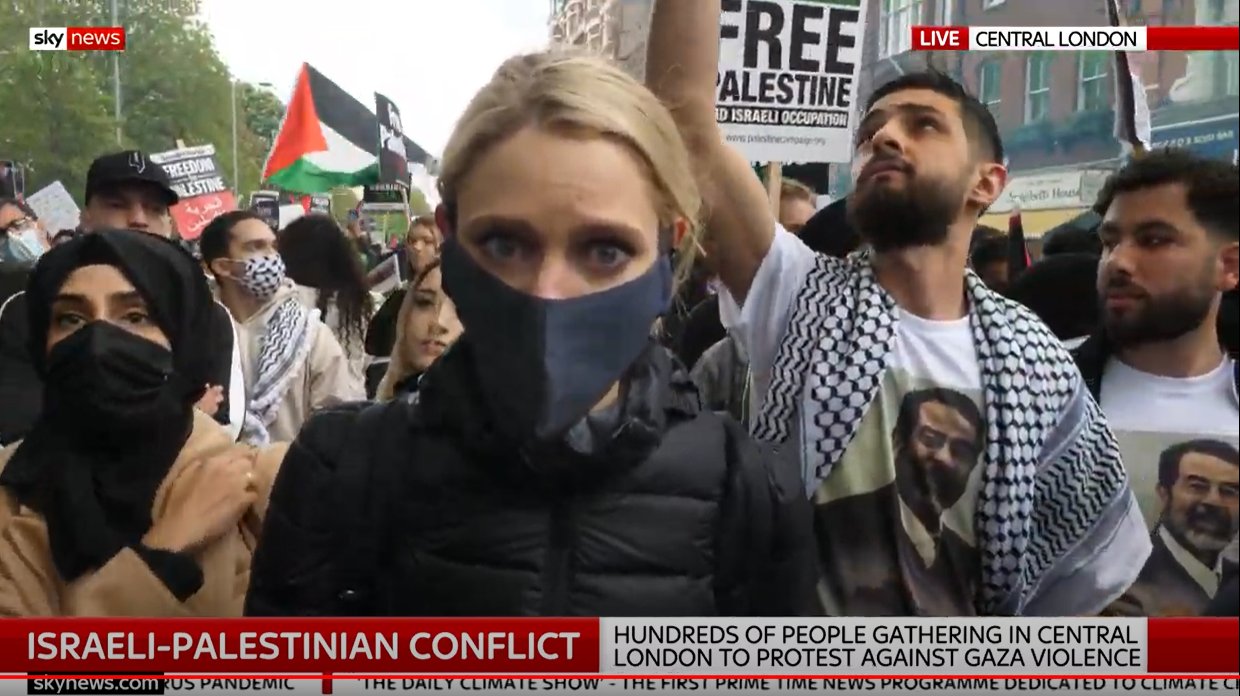 But one of the group adds: “Hamas are the symptom – Israel is the cause.

“Blaming Hamas for the conflict is like blaming a woman who has just been raped for the crime. It’s just wrong.”

The men also said they had met up with the same group of Jewish supporters they had seen in 2014 at the an Israel demo back then. 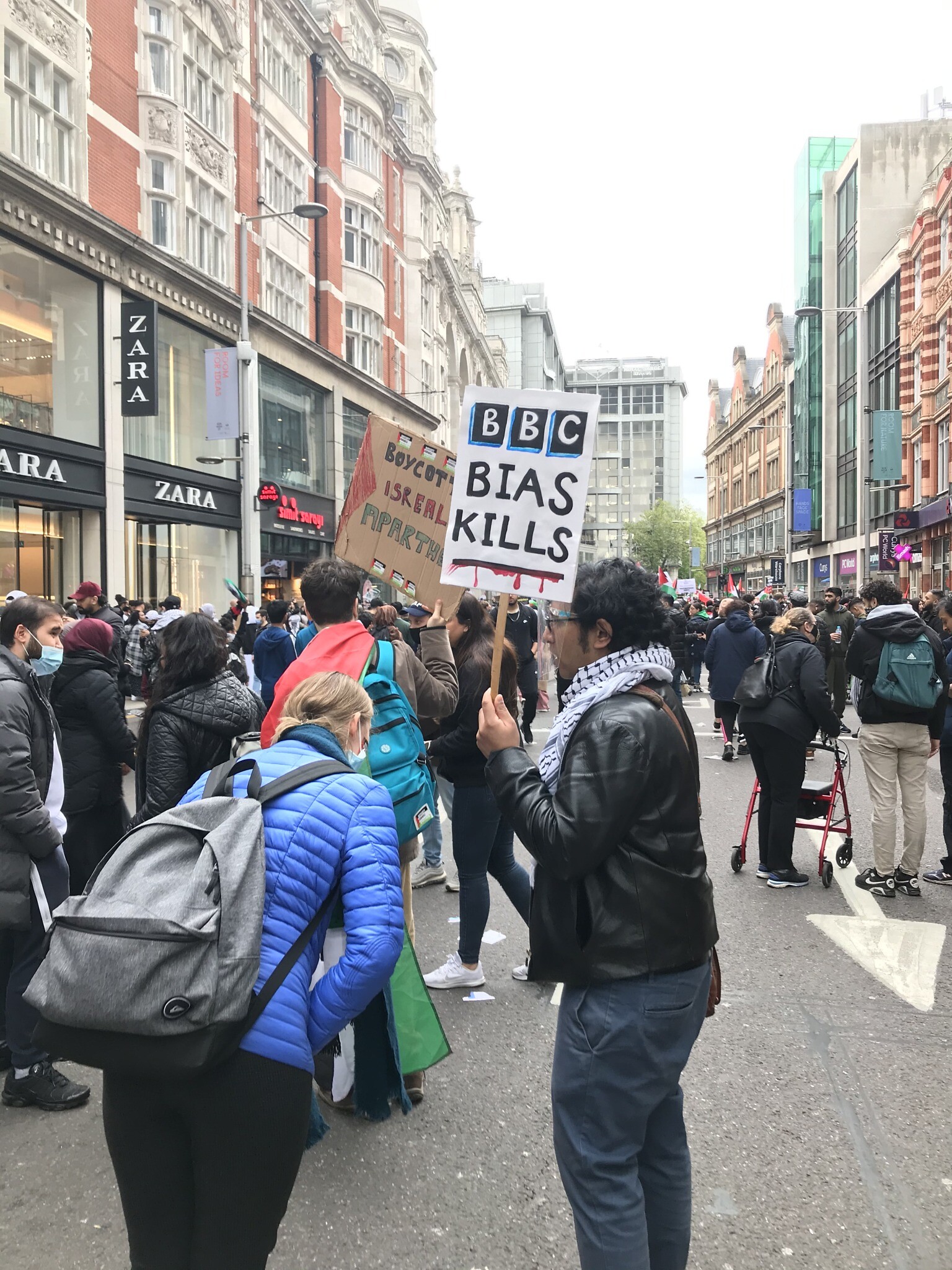 The usual Trotskyist Socialist Workers Party group were also out in force distributing banners claiming “Israel is a terrorist state.”

While most demonstrators were peaceful, there seemed little doubt there would have been problems if the Embassy building was approachable.

As well as ripping apart an Israeli flag, another protestor was seen trying to set alight an umbrella that was simply coloured blue and white.

Demonstrators arrived at Hyde Park near Marble Arch at noon on Saturday before marching to the Israeli embassy, holding banners and chanting.

Husam Zumlot, Palestinian ambassador to the UK, told crowds: “This time is different. This time we will not be denied any more. We are united. We have had enough of oppression.

“Today we are saying enough, enough with the complicity. Thank you for standing with us.”

Similar marches of solidarity have been held around the world in recent days, including events in Sydney, Brussels, Paris, Lebanon, Jordan, and Bangladesh among others.

Protests are now permitted again under Covid regulations, the Metropolitan Police said: “A policing plan is in place to ensure everybody is kept safe and to reduce the spread of Covid-19.”