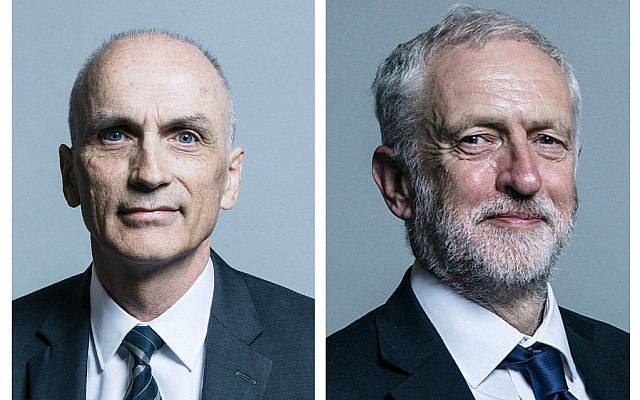 Labour Leader Jeremy Corbyn said he was “not involved in the decision” to reinstate Chris Williamson amid growing pressure for the MP to have the whip withdrawn.

Speaking to ITV News on Thursday, Corbyn said:”I wasn’t involved in the decision at all. It was an independent panel set up through the national executive. They examined the case and decided to admit him back in, albeit with a reprimand.”

When asked why the panel dismissed the recommendation by Labour staff to uphold the suspending, he said: “They went through the case in great detail and  the three of them in that panel made that decision.”

This comes after Labour deputy leader Tom Watson and 90 of the party’s MPs and peers issued a statement demanding Corbyn withdraw the whip from Williamson.

NEW: As Labour MPs call for Jeremy Corbyn to overturn the decision to allow Chris Williamson back into the party, the Labour leader says "he wasn't involved in the decision at all", the panel "went through the case in great detail" and "we deal with anti-Semitism very seriously." pic.twitter.com/AQ87wlxLS1

A ruling to allow Williamson back into the party sparked furore and despair in the Jewish community amid growing antisemitism concerns.

The statement from Labour politicians said they cannot overstate the “depth and breadth of hurt and anger” at the readmission of the Derby North MP to the party following his suspension over allegations of antisemitism.

“It is clear to us that the Labour Party’s disciplinary process remains mired by the appearance of political interference. This must stop. We need a truly independent process,” the statement said.

“We call on Jeremy Corbyn to show leadership by asking for this inappropriate, offensive and reputationally damaging decision to be overturned and reviewed.

“Ultimately, it is for Jeremy Corbyn to decide whether Chris Williamson retains the Labour whip. He must remove it immediately if we are to stand any hope of persuading anyone that the Labour Party is taking anti-Semitism seriously.”

Among signatories to the statement include Jewish Labour MPs Ruth Smeeth and Dame Louise Ellman, Alex Sobel and Dame Margaret Hodge. Lord Alf Dubs and Lord Levy were also among those backing the letter, alongside other Labour politicians including Stella Creasy and Yvette Cooper, Wes Streeting and Owen Smith.

View the statement and signatories in full here: 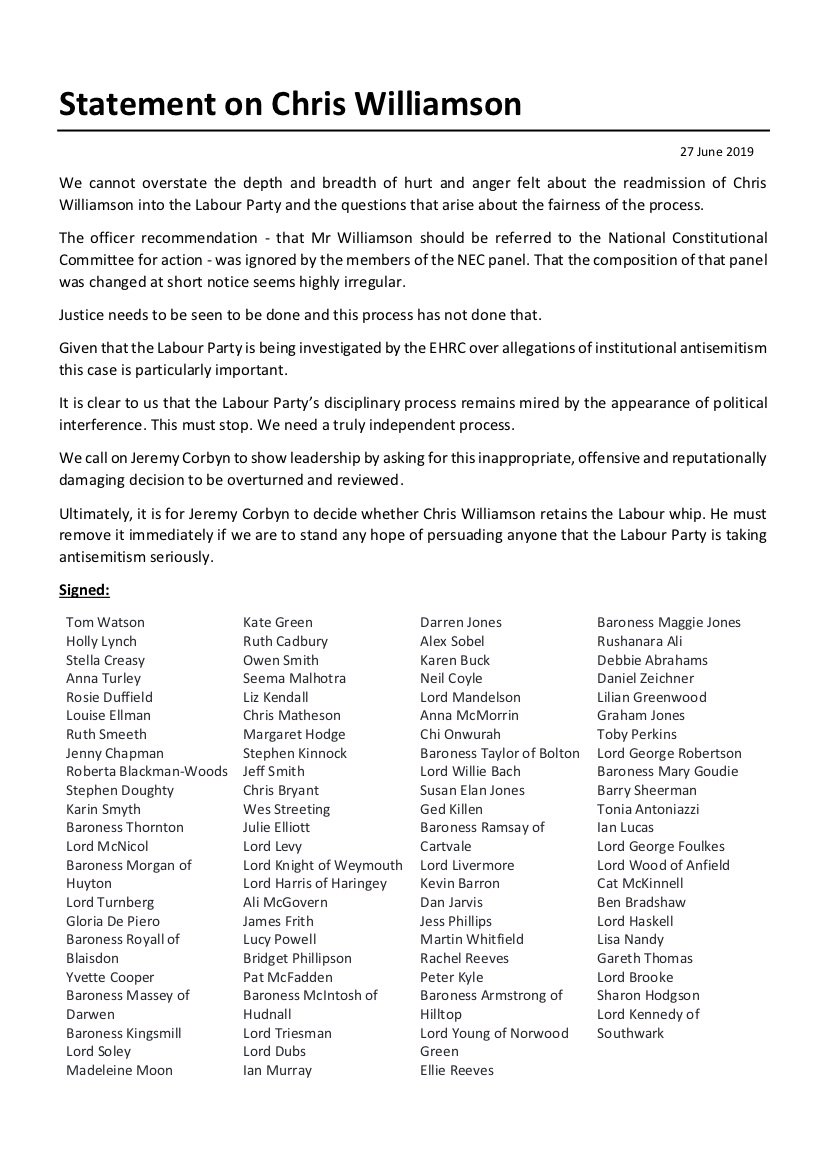 The Derby North MP, who has been a staunch supporter of other suspended and expelled members including Jackie Walker and Ken Livingstone. He was suspended in February after video footage showed him telling a meeting of the grassroots Momentum group that Labour’s reaction to antisemitism allegations had led to the party being “demonised”.

An NEC antisemitism panel found the MP for Derby North in breach of party rules and issued him with a formal warning after a four-month suspension. Should he repeat such conduct in future, it is believed Williamson is likely to face further more severe sanctions.

Leicester East MP Keith Vaz is believed to have pushed for the rejection of a party recommendation to refer Williamson to the National Constitution Committee, which deals with serious cases.

The decision prompted criticism from the community, with Simon Johnson, from the Jewish Leadership Council, claiming Williamson has shown no remorse and will offend again.

Writing in the Jewish News on Thursday, Mike Katz of the Jewish Labour Movement, said: “For as long as the Party continues to trot out its worn words about zero tolerance but fails to take any real action – action against friends and allies – it will show how little the Party actually cares about fixing the problem.”

Following his readmission into the party, Williamson tweeted his “heartfelt thanks for the avalanche of goodwill messages from grassroots members” after his suspension from the party was lifted.

“I’d like to express my heartfelt thanks for the avalanche of goodwill messages from grassroots members,” he wrote.

“I can now focus on representing local people in Derby Nth and working for a Corbyn-led Labour govt to positively transform the lives of millions.

“Together anything is possible!”

In wake of his readmission, Jewish community leaders and senior Labour MPs criticised the move.