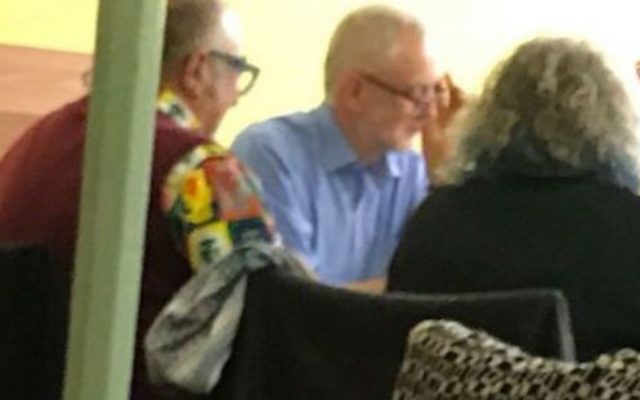 Jeremy Corbyn has attended a seder hosted by a fringe Jewish group that dismissed the mainstream communal leadership’s actions as “anything but an attempt to address antisemitism”.

The Labour leader attended tonight’s event by Jewdas in Islington, less than a week after endorsing another fringe group that staged a counter demonstration against a rally by the Board of Deputies and Jewish Leadership Council.

In a blog last week attacking the organisers of the main rally which brought 1,500 people to Parliament Square, Jewdas said: “What has happened over the last week is anything but an attempt to address antisemitism. It is the work of cynical manipulations by people whose express loyalty is to the Conservative Party and the right wing of the Labour Party. It is a malicious ploy to remove the leader of the Opposition and put a stop to the possibility of a socialist government.”

Jewdas has previously tweeted that Israel “needs to be properly disposed of”.

It’s understood that guests at tonight’s event booed at the mention of Board of Deputies president Jonathan Arkush.

The Jewish Leadership Council said: “His actions so far do not match up to his words…  Surely it cannot have been sensible, if Jeremy wishes to build bridges with the community, for the first act to be attending a dinner with people who are so hostile.”

Jewish Labour Movement commented that: “Jeremy Corbyn’s decision to spend his evening with an organisation that said “F *** you ” to Jews who have serious and well founded concerns over antisemitism within the Labour Party, has truly topped off the worst week on record of awful relations between the Labour Party and the Jewish community”

Board of Deputies president Jonathan Arkush said: “Views held by Jewdas are their business, even if I disagree with them. We are a diverse community. But they refer to antisemitism in @UKLabour as a smear. If @jeremycorbyn goes to their event how can we take his stated commitment to be an ally against antisemitism seriously?”

The Campaign Against Antisemitism commented: “It’s hard to imagine how this duplicitous man can claim to be remedying antisemitism within the @UKLabour Party. The Party must consider the message that is sent to British Jews and other minorities by @JeremyCorbyn remaining as Leader.”

It comes less than a week after Corbyn provoked anger by declaring Jewish Voice for Labour, which staged the counter demo last week, to be “good people”. Figures within JVL have long suggested accusations of antisemitism in Labour are exaggerated, while senior representatives were found to have been members of the notorious Palestine Live Facebook group.

A spokesman for Mr Corbyn said he attended an even in a personal capacity and not in his official role as Labour leader. “Jeremy was invited to a Passover Seder with Jewish members of his local community,” said the spokesman.

Jon Lansman, founder of the Corbyn-supporting Momentum group, said the Labour leader had not told his own office he was going to the event. Mr Lansman, who is Jewish, said: “It was his night off, he had nothing in his official diary, his office didn’t know he was there.

“So I don’t think this is as significant as it’s being made out.”

But Mr Lansman told BBC Radio 4’s Today programme: “Well, it’s certainly not helpful to Jeremy or the cause of opposing anti-Semitism in the Labour Party as it happens … and I think the important thing is that Jeremy is seeking to meet with mainstream Jewish organisations.”

Momentum has said accusations of anti-Semitism “should not and cannot be dismissed simply as right-wing smears”.

Labour backbencher Mr Woodcock, a prominent critic of the party leader, said Mr Corbyn’s attendance at the Seder was “deliberately baiting the mainstream Jewish community days after they pleaded with him to tackle anti-Semitism”.

“And he must know that meeting them now will give his members the message that the group’s extreme views are OK.”

Another Labour MP, Angela Smith, said Mr Corbyn’s attendance at the Jewdas Seder “reads as a blatant dismissal of the case made for tackling anti-Semitism in Labour”.

JLM spokesman Ivor Caplin said: “When we called on the leader of our party to show moral leadership and take decisive action to stamp out anti-Semitism, this is not what we had in mind.

“Jewish party activists have spent the weekend knocking on doors for local candidates for council elections across the country.

“They do not deserve the indignity of our leader making this situation even worse.”

Jewdas shrugged off the attack, posting a Twitter message: “Great that there’s so much interest in our work tonight! Please feel free to make a donation!”

The group said: “We are proud to be Jews and proud of everyone who attended, whether they were Jewish or not.

“We want everyone to know – we’re leaving Mitzrayim (Egypt). Change is coming. Revolution will come.”

Comedian David Baddiel, who has been at the forefront of the debate over anti-Semitism in the Labour Party, rejected suggestions that Jewdas was “despised” by other members of the Jewish community.

“No, it isn’t,” he said. “They are just Jews who disagree with other Jews. Which means: Jews … To make out that it’s somehow anti-Semitic for him to spend Seder with them just because they’re far left is balls.”

Writer David Schneider tweeted: “Boo! Corbyn needs to get out and meets some Jews!” (Corbyn spends Passover with some Jews at Jewdas) “Boo! Not those Jews!”