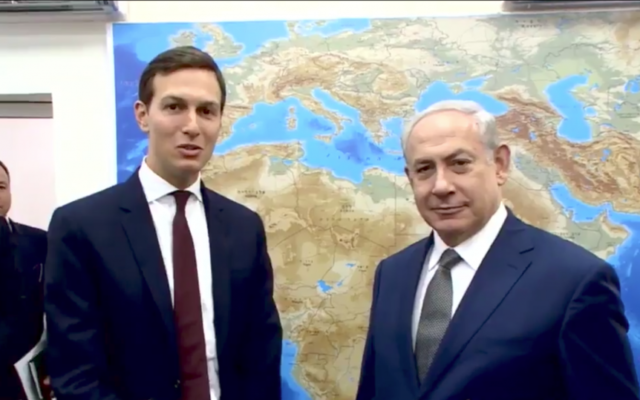 Jared Kushner meeting with Bibi Netanyahu in 2017, in the preliminary stages of the peace plan.

Israeli government officials agreed not to annex any land before the country’s general election next month, Jared Kushner said.

Kushner, the architect of the newly-unveiled peace plan between Israel and the Palestinians and senior adviser to President Donald Trump, made the statement Thursday at the United Nations headquarters in New York while speaking to reporters, Fox News reported.

The plan would allow Israel to annex its settlements as well as the Jordan Valley. It would create a Palestinian state made up of Gaza and the majority of the West Bank with a capital in east Jerusalem, on condition they demilitarise the Gaza Strip and the Palestinian Authority ends its practice of paying terrorists and their families.

Trump unveiled the plan on Jan. 28 with Prime Minister Benjamin Netanyahu at the White House. The top spokesperson of Netanyahu’s Likud party, Jonatan Urich, that day said the Knesset would vote on annexing land on Feb. 2, but the vote was delayed.

The Palestinians under Palestinian Authority President Mahmoud Abbas rejected the plan. Israel has endorsed it.