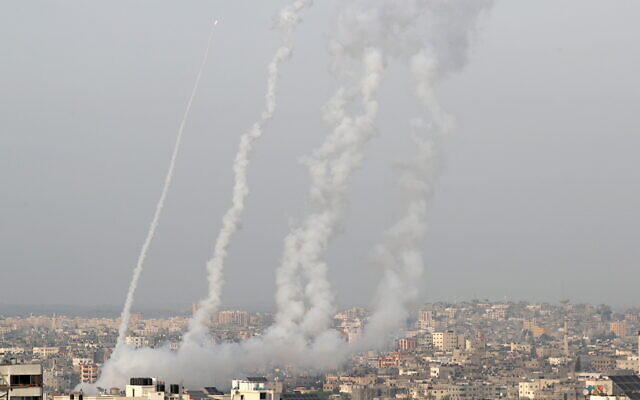 Middle East Minister James Cleverly has said the Government is urging Israel and the Palestinians to “work with mediators towards an immediate ceasefire to prevent further loss of life and a worsening humanitarian situation” in the current conflict.

Responding to an urgent question in the House of Commons, the MP for Braintree said the UK was “supporting United Nations, Egyptian and Qatari efforts to that end” and was working “closely with the United States. ”

Cleverly: “We are also prioritising our own diplomatic efforts through both bilateral and multilateral channels.

“The Foreign Secretary and I, with the support of our diplomats on the ground, have been working to progress the conditions needed for an immediate ceasefire.

“The Foreign Secretary has spoken in recent days with the Israeli Foreign Minister and the Palestinian Prime Minister; he reinforced our clear message of de-escalation and our desire to work together to end the violence.

“I delivered similar messages to the Israeli ambassador and the Palestinian head of mission in London.”

The minister said the UK unequivocally condemns the firing of rockets at Jerusalem and other locations within Israel and strongly condemns acts of terrorism by Hamas and other groups.

He said they must “permanently end their incitement and rocket fire against Israel.”

Cleverly added: “Israel has a legitimate right to self-defence and to defend its citizens from attack.”

He continued: “We are also concerned by reports that Hamas is once again using civilian infrastructure and populations as a cover for its military operations.”

Labour’s shadow minister Wayne David, who had tabled the urgent question on Wednesday,  responded by saying: “It is of enormous concern to everyone in the House that in this conflict between Hamas and Israel nearly 300 people have been killed, including 65 children.

“This is truly appalling. We condemn the rocket attacks by Hamas and the Israeli airstrikes, which have killed so many innocent people and severely damaged schools and medical facilities.”

He asked the Middle East Minister to “elaborate” on what representations he has recently made to secure the objective of an immediate ceasefire and what efforts were being made to provide humanitarian support for the people of Gaza.

Of the 40 MPs who spoke in the Commons, Layla Moran, the Liberal Democrats spokesperson for foreign affairs, recalled how she had spoken last week of her heartache at the deaths of Palestinian children whose names she had read out in the House.

The MP, herself of Palestinian descent, said of the 63 deaths of Palestinian children in the conflict up until now:” My heart was broken before – it is shattered now.”

The Conservative MPs Robert Halfon, Stephen Crabb and Christian Wakeford were amongst those to stress the role Hamas had played in fuelling the current conflict.

Jeremy Corbyn, currently an Independent MP, and the Labour MPs Richard Burgon, Diane Abbott and Andy Slaughter launched familiar one-sided attacks on Israel, with the former Labour leader asking if the UK had financed attacks on Palestinians through weapons sales.