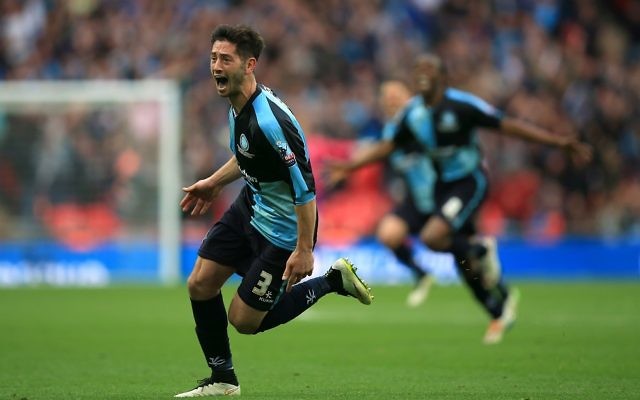 Joe Jacobson has said he’s looking forward to testing himself against “one of the best teams in Europe” when the League Two side travel to north London for their FA Cup fourth round clash.

Believing they can go to White Hart Lane and hopefully cause an upset, the 30-year-old full-back told Jewish News: “You have to believe you can go there and cause a shock. Obviously, we’re massive underdogs, they have a wealth of talent and riches, and players – who were not even in their squad the other day, who they’ve paid millions of pounds for.

“Obviously, it’s going to be a ridiculously tough game, but you have to go there with belief that you can get something out of the game. You don’t want to go there and just be there for the sake of it, to make up the numbers, you want to make everyone proud, give your all and test yourselves against these great players – and try and do something like Plymouth did against Liverpool on Sunday.

“There haven’t been too many upsets in this year’s competition, so hopefully we can be one of those.”

Describing how happy him and his teammates were with the draw, he said: “We all watched the draw together, ahead of our match against Blackpool tonight, since when a lot of videos have come out of our reaction. It went viral, and is a good little video! It just shows there’s been a lot of talk about how the FA Cup has been downplayed quite a bit in the last couple of years, but for a team like us and all the players involved, it’s still a magical competition and still allows players to have their dreams come true, playing in these top stadiums against top teams and players.”

The Buckinghamshire side booked their glamour tie, by beating non-League side Stourbridge in Saturday’s third round tie at Adams Park. Playing a vital role in the 2-1win – his cross setting up the winner, he said: “I was happy to get the assist but as a full-back, that’s one of my roles, to get forward and provide crosses. And when you have someone like Adebayo Akinfenwa in the box, you can put the ball in an area, he’s going to attack it, and he wins more than his fair share of duels in the box and produced a great finish for me. If he doesn’t put it in the top corner, no one remembers the cross.

“But we were just happy to get the win, Stourbridge were brilliant on the day, brought with them 2,000 fans who didn’t stop getting behind them for the whole game, it made a great FA Cup atmosphere and they made it really tough for us.

“They produced one of their greatest ever games and we had to stand up and match them, and worked hard to get the result. At the end we want to take some of the spirit and determination into the game against Tottenham where we’ll be in their position, against the big team, give everything we can and produce our best performance to hopefully get something out of the tie.”

Looking forward on a personal level to testing himself against the Premier League outfit, he said: “You want to test yourself against the best players there are, and at the minute, Tottenham’s team are one of the best in Europe. We have three or four games before that, but to be on the same pitch as these players will be awesome and it will be nice to try and play our A game if we can and then see where that takes us.”

And while conceding the league – and earning promotion in May – is the priority, he isn’t though viewing the cup run as a mere bonus. “We haven’t really discussed it as a group [what takes priority]” he says. “Obviously, the league is the bread and butter, but you have to take these FA Cup games when they come and treat them because we don’t get that many opportunities in the lower leagues to play against the top Premier League clubs.

“Financially it’s huge and will help the club out massively, any lower league club that draw a Premier League club away – where hopefully it will be a full house – will make the club a hell of a lot of money that they wouldn’t normally be getting in, so we have t take that very seriously. But probably the most important, in terms of what you spend all year trying to get towards, is the league, but we want to try and do well in all the cup competitions