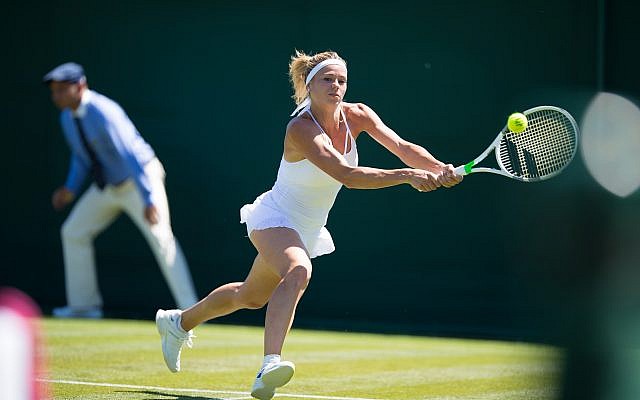 This week Camila Giorgi won the National Bank Open, Canada’s most prestigious tennis tournament, and it was a milestone for two reasons.

First, it was the first major title win in the 29-year-old’s career, and a huge upset — she was ranked 71st in the world before beating No. 6 Karolina Pliskova in the finals.

Second, Giorgi became the first Jewish player to win the event in 56 years, since American Julie Heldman took what was then called the Canadian Open in 1965. Founded in 1881, the Canadian Open is the second oldest tennis tournament behind only Wimbledon.

Even Giorgi was surprised she pulled it off.

“I think I didn’t have the opportunity [to win the tournament] in these years,” she told the Jewish Telegraphic Agency in her broken English following the match.

Reports have swirled for years that Giorgi might be Jewish, and that she was considering obtaining Israeli citizenship to play for the country’s team in the Fed Cup — a World Cup-style tournament. She confirmed to JTA that her parents, Argentines who immigrated to Italy, are Jewish. In fact, her favorite book is “The Diary of Anne Frank.”

“The book moved me because I am Jewish, but also because she was such a good person who saw the good in people,” Giorgi told JTA.

Although she did not see Giorgi win the National Bank Open on television, Heldman said she knew of the Italian player and her Jewishness and was “elated” to learn of her victory.

“The feat speaks well not only of Giorgi’s desire and talent, but of the popularity of tennis around the world and the Jewish Diaspora,” Heldman, now 75 and a grandmother, said from her home in Santa Monica, California.

“There are not as many Jewish people in Italy as elsewhere, so Giorgi’s title indicates that anyone around the world, including Jews, are capable of accomplishing outstanding achievements in tennis or any other field,” added the former champion, who was ranked as high as fifth in the world in 1969 and last month was inducted into the International Tennis Hall Of Fame.

The National Bank Open title moved Giorgi’s world ranking to 34 and continued a hot streak: She has won 16 of 20 matches since the French Open in late May and reached the quarterfinals for Italy at the Tokyo Olympics earlier this month.

Giorgi credits her success to her father, Sergio, who fought in Argentina’s 1982 Falklands War and has been her coach since she first picked up a racquet — at age 5.

The father-daughter team is one of several that have led to success in professional tennis. Heldman’s late mother, Gladys, was an icon in her own right — she founded World Tennis magazine and helped launch the women’s tour in the 1970s.

Claudia and Sergio Giorgi immigrated to Italy from La Plata, Argentina, prior to Camila’s birth in 1991. The young Camila took lessons starting at 5 and won many junior tournaments. By 9 she was offered a tennis scholarship by the renowned coach Nick Bollettieri and would go on to win many more junior events.

As Giorgi’s ranking rose through years, she was selected for Italy’s Fed Cup team. However, in 2012, Giorgi was not high enough on the depth chart to make the squad, and her parents were wooed by Israeli officials, seeing Giorgi as a possible No. 2 behind Shahar Peer, according to Raphael Geller of Israel Sports Radio. Ultimately Giorgi decided to compete for Italy, and she has played in the Fed Cup for her native country since 2014.

Along with winning the National Bank Open, Giorgi has upset several No. 1-ranked players in her career, including former stars Victoria Azarenka, Maria Sharapova and Caroline Wozniacki. Giorgi reached the Wimbledon quarterfinals in 2018, losing to Serena Williams.

“What is so impressive about Giorgi is that at age 29, she is able to adapt and transform her game in a way to enable her to beat high quality players in Montreal,” said Cindy Shmerler, a New York Times writer and former editor of World Tennis.

Off the court, Giorgi credits her mother — who designs her on-court outfits — with giving her an appreciation for art and other things to take refuge in away from the gruelling professional sports world. With nearly half a million followers, she has become an Instagram model as well.

“I love my life. I want to do well in tennis, but tennis is just my work,” Giorgi said. “In the end, I know my family loves me and I enjoy art, the museums and stores, so my life is in balance.”