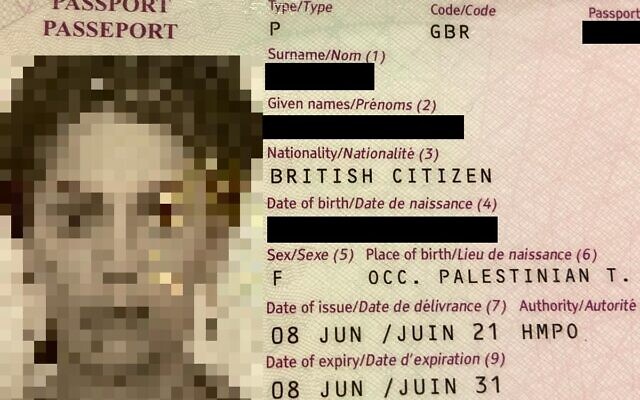 The British passport that Ayelet Balaban received in June 2021, with her place of birth listed as Occupied Palestinian Territories instead of Jerusalem (courtesy) via Times of Israel

A Jerusalem-born Israeli woman whose father is British has revealed her shock at discovering that her new UK passport listed her birthplace as the “Occupied Palestinian Territories.”

She applied for her new passport online and says she sent the old one by mail to the UK on May 23, two days after the end of the 11-day conflict between Hamas and Israel known as Operation Guardian of the Walls.

“I was shocked to see that my place of birth was changed from Jerusalem to Occupied Palestinian Territories,” she told The Times of Israel.
Balaban confirmed she received her new documentation back on Monday night.

Jewish News understands that the Jewish Leadership Council had written to Home Secretary Priti Patel on the matter.

A Home Office spokesperson said: “We apologise for this error and are urgently investigating how this has occurred. We will contact Ms Balaban about the issuing of a new passport showing the correct place of birth.”

In their letter the JLC expressed concern that HM Passport Office had decided to cease allowing British citizens to use Jerusalem – the Holy City for Jewish people – as their birth place.

This was despite their being no change in UK foreign policy towards Jerusalem.

It was confirmed by government sources that the location on the passport was the result of an error, and is not an indication of any new British government policy.

The medical centre at which Balaban was born sits within the territory that formed an Israeli exclave between the 1948 War of Independence and the 1967 Six Day War, at which time Israeli forces captured the surrounding area from Jordan.

The Mount Scopus site, which the hospital shares with Hebrew University, was never part of Jordanian-controlled East Jerusalem.

Balaban and her husband Avi run a plant and flower nursery in Ashkelon. The nursery, which was hit by Hamas fire, was closed during the Gaza conflict in May.

She said that her brother, who renewed his British passport two years ago, was still listed as being born in “Jerusalem,” which had led her to believe that this could be a new policy.

“Living in the south, and working near the Gaza border, we had just [been through] the [military] operation and I was just completely shocked,” Balaban said. “After everything we’ve been through, how do you do this to my personal passport?”

“It really was a hard feeling, because we closed for 11 days,” she said. “We had rockets that fell in our greenhouses, so we couldn’t even go there.”

“We’ve just been trying to lick our wounds and it has been really shocking for me,” she said.

The listed place of birth for those born in Jerusalem was a contentious issue also for dual-US citizens, some of whom waged a long legal battle in order to have “Jerusalem, Israel” listed on their US passports instead of just Jerusalem.