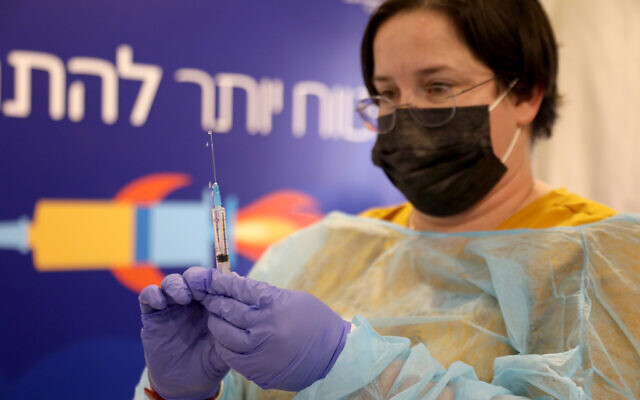 A medical worker prepares a vaccine against the COVID-19 at a municipality vaccine center in Tel Aviv, Israel, Dec. 31, 2020. (Gideon Markowicz/JINI via Xinhua)

People with a higher body mass index (BMI) are more likely to test positive for the virus that causes Covid-19, new research suggests.

A study by the Chaim Sheba Medical Centre in Israel found that patients who are classed as overweight – with a BMI of 25 to 29.9 – were 22% more likely to contract the virus than someone of “normal” weight with a BMI of 18.5 to 24.9.

The research, which has been presented at the European Congress on Obesity, looked at the relationship between BMI and the likelihood of testing positive for Sars-Cov-2, at the largest medical centre in the Middle East.

Obesity-related factors are believed to be associated with an increased risk of contracting various viral diseases.

Researchers found the relationship between BMI and the probability of a patient testing positive remained significant even after age, sex and other medical conditions were considered.

The study also found that people with diabetes were 30% more likely to test positive, while the likelihood was six times greater in those with high blood pressure.

However, the risk was reduced in people with a history of a stroke, ischemic heart disease and chronic kidney disease by 39%, 55% and 45%, respectively.

The researchers were unable to provide an explanation as to why the risk was lower for people who had those conditions.

The study authors concluded: “As BMI rises above normal, the likelihood of a positive SARS-CoV-2 test result increases, even when adjusted for a number of patient variables.

Meanwhile, separate research found that fat around the waist, also known as abdominal obesity, was more important than “general obesity” – determined by BMI – in predicting the severity of chest X-ray results in patients with coronavirus.

Chest X-ray (CRX) severity scores are calculated by dividing each lung into three zones, with each one scoring a maximum of three points – zero representing normal lung performance and three for poor function.

The study by the IRCCS Policlinico San Donato research hospital in Italy found 59% of patients with abdominal obesity had a high CXR score compared with 35% of those without abdominal obesity.