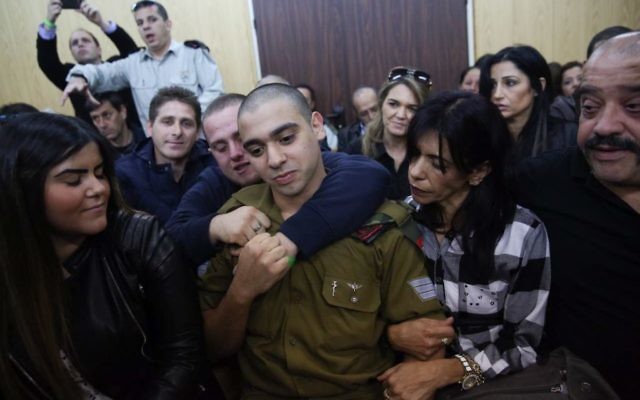 Elor Azaria, the Israeli soldier, who shot a Palestinian terrorist in Hebron arrives to the courtroom before the announcement of his verdict at at Hakirya military court in Tel Aviv.

An Israeli military court has convicted a soldier of manslaughter over the fatal shooting of an incapacitated Palestinian attacker.

The verdict caps a nine-month saga that has deeply divided the country.

Defence officials have criticised Sergeant Elor Azaria’s conduct, while large segments of the Israeli public, along with members of the nationalist ruling coalition, have rallied behind him.

In delivering her verdict, Colonel Maya Heller systematically rejected all of Azaria’s defence arguments, saying “the fact that the man on the ground was a terrorist does not justify a disproportionate response”.

The court threw out a relative of Azaria, while a second relative stormed out after his conviction.

A young woman called the verdict a disgrace and screamed “the Israeli military is over” before she was thrown out of the courtroom.

Another woman screamed “disgusting leftists” and stormed out.

Azaria sat emotionless as the verdict was delivered.

He is expected to be sentenced in several weeks.

Israel’s defence minister said the conviction was “difficult” and that he disagreed with the verdict, but called on the public to respect the court’s decision.

Avigdor Lieberman told reporters after Wednesday’s ruling that “despite the difficult verdict, the defence establishment will do everything it can to assist the soldier and his family”.

He dismissed criticism of the military, saying: “We must keep the army outside every political argument … and keep it in the widest consensus in Israeli society.”

Meanwhile, an Israeli advocacy group has criticised what it called an “exceptionally low” prosecution rate by the Israeli military in cases of violence committed by soldiers against Palestinians.

The report by Yesh Din, a human rights group that is often critical of the Israeli military, came a day before a military court’s verdict is to be delivered in a high-profile manslaughter case against a soldier.

In its annual report, Yesh Din said the army opened 186 criminal investigations into suspected offences against Palestinians in 2015, but just four of those investigations yielded indictments.

The group said the 2015 figures, based on official army data, were the most recent available.

In the autumn of 2015, a wave of Israeli-Palestinian violence erupted, characterised by Palestinian stabbing and car-ramming attacks on Israelis.

The report said that of 76 Palestinians killed in clashes with soldiers in the West Bank in 2015, only 21 deaths resulted in investigations.

“The fact that in 55 incidents no criminal investigation was considered necessary raises doubts about the implementation of Israel‘s declared policy on investigating civilian fatalities,” the report said.

It said the data signalled an “inability and unwillingness” to address unlawful conduct.

The Israeli military did not respond to requests for comment.