Footage posted online showed Tzipi Hotovely rushed away in a car as pro-Palestine demonstrators opposed her speaking at the London School of Economics – with one activist account threatening to “smash” her car windows.

In a statement to Jewish News, an LSE spokesperson said the university values free speech but it “must be in a mutually respectful manner. Intimidation or threats of violence are completely unacceptable.”

“We are aware of some threats of violence made on social media around this event. Any LSE students identified as being involved in making such threats will face disciplinary action. We will be reviewing the processes around this event to inform future planning.”

The incident was condemned by Education Secretary Nadhim Zahawi as “deeply disturbing”. He offered an apology to the envoy.

Israeli ambassador Tzipi Hotovely was forced to flee London’s LSE university after students protested her presence and refused to give her a platform. This is how colonial war criminals must be treated everywhere. #FreePalestine pic.twitter.com/SuInl4tna0

Foreign Secretary Liz Truss also condemned it, saying: ” We in Britain believe in freedom of speech. The treatment of Israeli Ambassador @TzipiHotovely last night and the attempt to silence her was unacceptable.”

Lisa Nandy, Labour’s Shadow Foreign Secretary added, “the appalling treatment of Israeli Ambassador Tzipi Hotovely is completely unacceptable. There is no excuse for this kind of behaviour.”

“Freedom of speech is a fundamental right and any attempt to silence or intimidate those we disagree with should never be tolerated.”

Board of Deputies President Marie van der Zyl said: “Those who exceeded the bounds of peaceful protest must be disciplined by the LSE and prosecuted where appropriate. Huge credit to Israeli Ambassador Tzipi Hotovely for facing down intimidation and for an engaging 90-minute event with students.”

Hotovely was appearing at an event hosted by the LSE Debate Society, which shared a statement before the event to encourage “discourse” on the Israel-Palestine conflict.

The society, which has invited Husam Zomlot, the Palestinian ambassador to the UK next week, said the topic “requires challenging the positions of the people involved and ensuring a diversity of opinions and perspectives.”

They added it was created “to allow students to engage with influential policymakers.

During a rally before she spoke, in a video posted online by the account @hurryupharry, protestors reportedly waved the fag of Iranian proxy militia Kataib Hezbollah.

In the clip a speaker, Massoud Shadjareh, said: “it is almost the same concept as Holocaust denial.. denying the atrocities which are taking place right now, denying the right of every Palestinian right now”.

On Instagram, an account called ‘LSE Class War’ shared posts saying they were “storming in” to the event. “Let’s make her shake. F*** the old bill [police]”, they wrote. 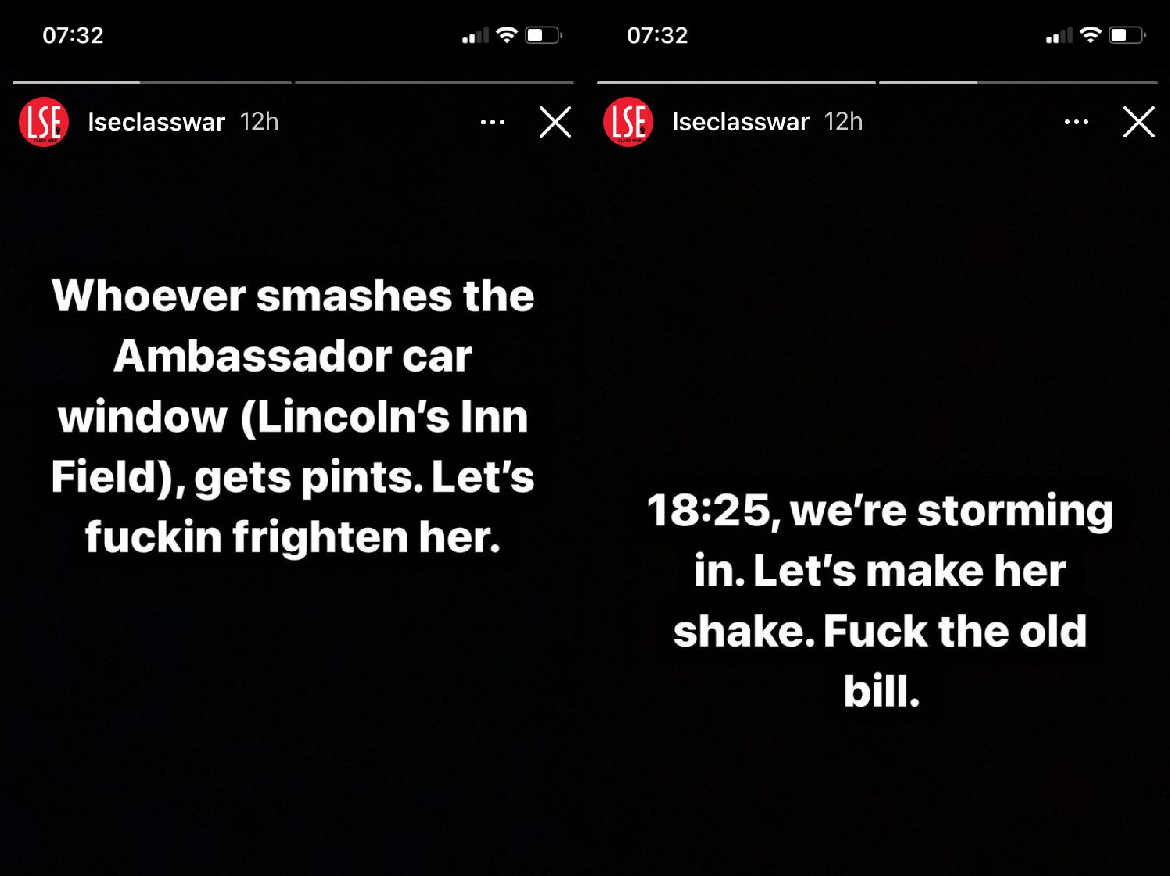 Before the event the LSE Palestine Society posted on Instagram that it “unequivocally rejects and are outraged” at the event with Hotovely.

It said she “has a track record of anti-Palestinian racism, islamophobia and war crimes, as well as actively facilitating apartheid and settler-colonial occupation as the Israeli Settlements Minister.”

The account added: “It is our duty to protest this event and make it known that such violent racist rhetoric, denial of Palestinian existence and colonial apologism has no place in our LSE campus and is not up for “debate”.” 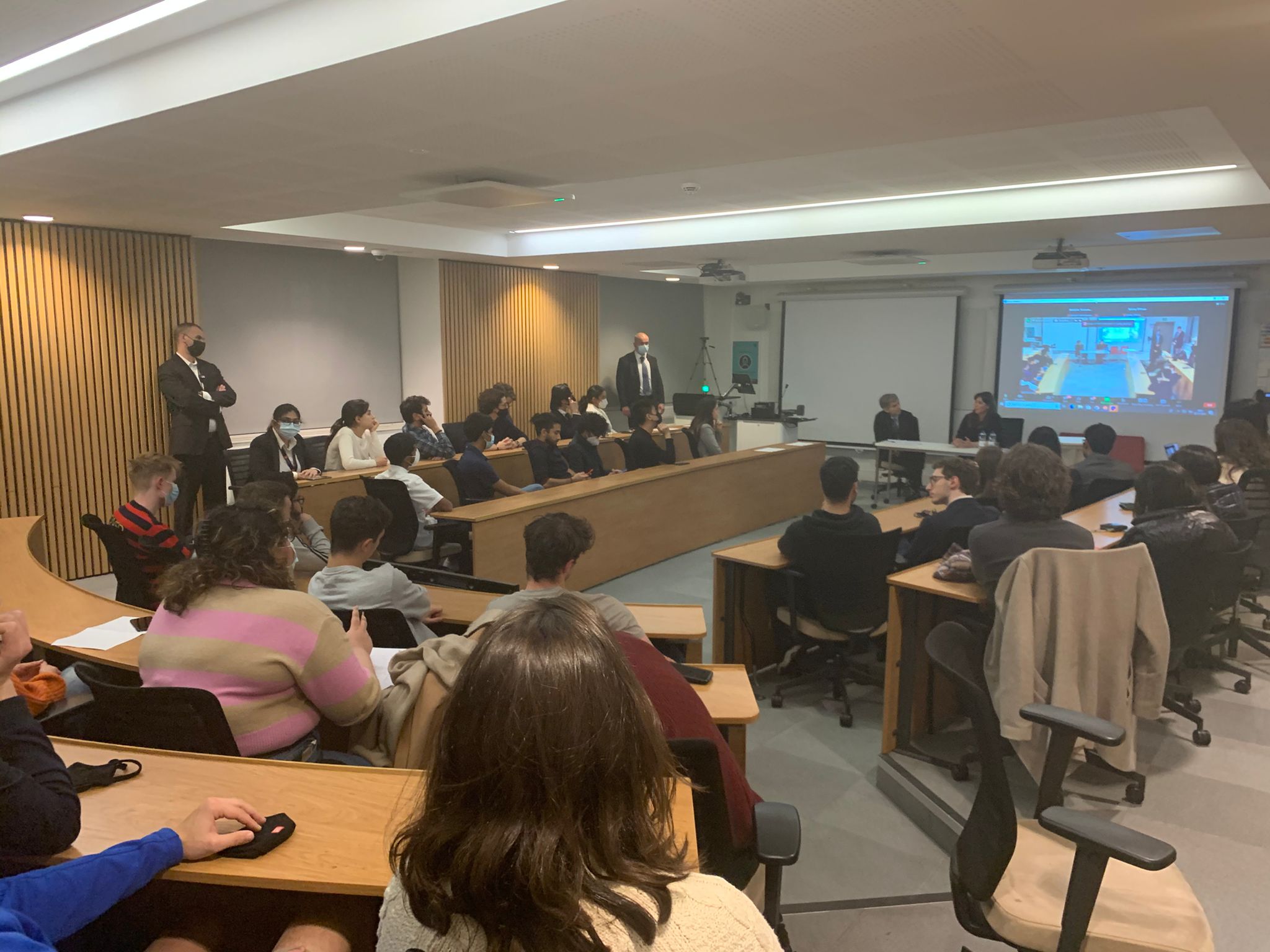 In a statement, the Israeli Embassy in the UK said it was “a successful, open and fruitful discussion that went ahead as planned.

“Outside the venue, there was a demonstration organised by Palestinian and Islamic societies across London universities. British police maintained order at the scene.

“The violence we witnessed when the ambassador left the premises after the talk will not deter Israeli diplomats from engaging in meaningful dialogue with all parts of the British society.”

In a statement, the Metropolitan Police said they “were in attendance for a protest in Houghton Street, WC2 on Tuesday, 9 November. There were no arrests.”