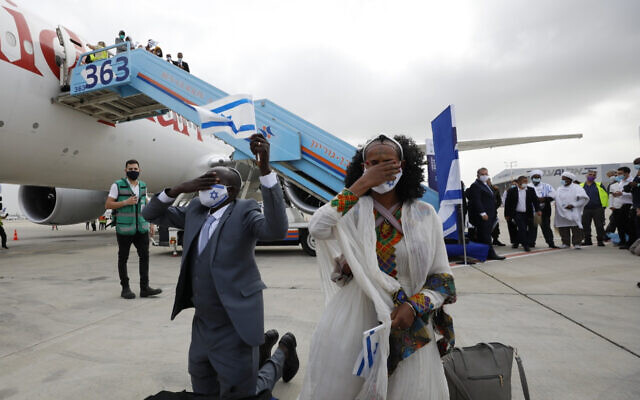 Ethiopian olim pray on the tarmac after their flight landed (Photo: Olivier Fitoussi)

Israel is set to speed up its evacuations of some of the relatives of Ethiopian Israelis who remain in the country in the midst of an escalating civil war.

The news comes just a week after Sigd, an Ethiopian Jewish holiday that historically was marked with prayers for God to return the Jewish people to Israel

Those who have first-degree relatives in Israel — a category that was approved for evacuation in an agreement made in 2015 — will be evacuated more quickly. That group will number at least 3,000, Ynet reported.

But there are thousands more Ethiopian Jews waiting to immigrate. Members of the same family may not be able to get to Israel together if they were not all the on the list approved in 2015.

Over the past year, Ethiopia has been the site of a bloody civil war between fighters in the rebel Tigray Army and Ethiopian nationalist forces, backed by troops from neighbouring Eritrea. More than 10,000 people have been killed in the fighting, according to estimates from the United Nations and aid groups, and numerous war crimes have been documented on both sides, including frequent rapes of women and children. Recently, the president of Ethiopia encouraged civilians to arm themselves.

In the 30 years since Israel covertly airlifted more than 14,000 Ethiopian Jews to the country as part of Operation Solomon, more than 8,000 Jews officially recognised by the Israeli government have remained stranded in Ethiopia, their pleas for asylum were placed in limbo, even as some have had family members resettle in Israel.

The war has particularly compounded problems for those Jews stuck in Ethiopia. Activists in Israel say the actual number of Jews in Ethiopia requiring asylum is closer to 12,000; there are also Ethiopian Jewish tribes not recognised by Israel that seek to remain in their country while practicing Judaism.

Most of the remaining Ethiopian Jews are concentrated in the capital city of Addis Ababa, which is also a major site of the fighting. Many are scared about a potential total collapse of the country’s government.