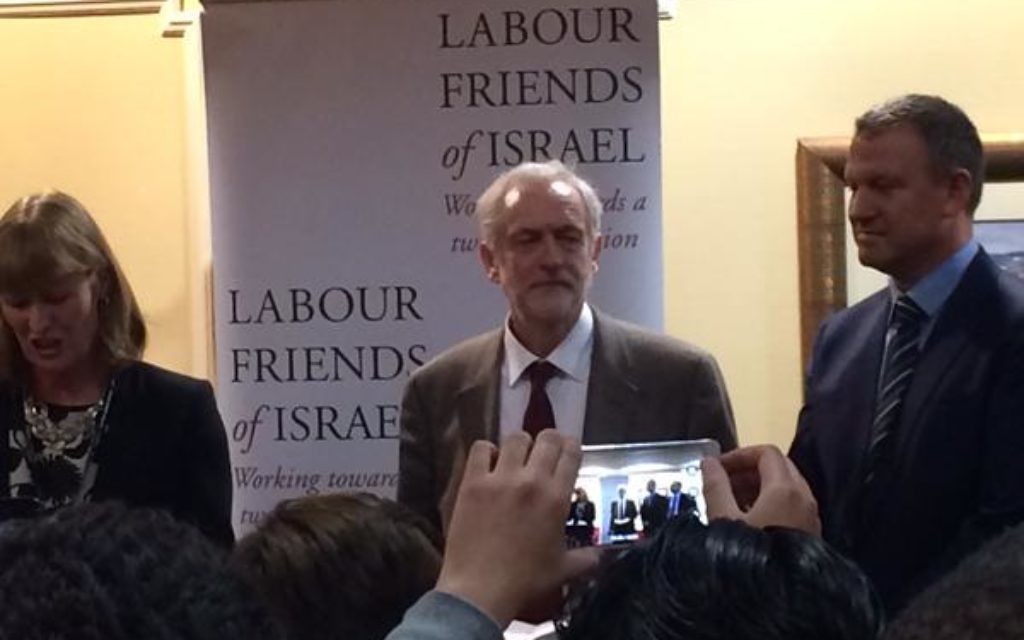 By Justin Cohen, in Brighton – Reporting from the Labour 2015 Annual Conference

Jeremy Corbyn this week shared a platform with Israel’s deputy ambassador and a senior Labor MK at Labour’s annual conference – but failed to mention the country by name during a landmark address to Labour Friends of Israel.

Community leaders welcomed the Islington North MP’s presence at the fringe reception as an early indication of the party’s readiness to continue to engage.

But his failure to mention Israel during the seven minute speech – in stark contrast to Ed Miliband who uttered the name 43 times during the same event last year – provoked widespread anger and was branded an “astonishing omission” by BICOM. One member of capacity audience of hundreds – from which the leader generally received a respectful and at times warm response – screamed out ‘say the word Israel, say the word Israel’.

Corbyn – who as a backbencher was one of Parliament’s most vocal critics of Israel – told the event he had visited the Middle East on nine occasions during which he had met some he “agreed with, some I don’t. I have a neutral opinion on many things”.

“As far as I’m concerned it’s important that we open the discussion from the time I’ve been elected on the basis I want to meet everybody, I want to hear all those points of view, I want us to be a party for peace and progress in the Middle East by linking up with all those groups that want peace and progress.”

While explicit references to Israel and the Palestinians were limited, he said: “It’s about dialogue and how you bring about that long-term dialogue. That is what I want to see. Therefore the issue of recognition of Palestine was something very important in the last parliament. It may well come up again. I know some people in this room think it was premature, some people supported it and I’m sure everyone recognises the only way forward is one of peace and negotiation, dialogue and through recognition of the rights, needs and traditions of all the people of the region. I hope we can promote that peace process.” The new leader also expressed hope “we are able to ensure the siege of Gaza – or the restrictions – on Gaza are lifted”.

Corbyn during the event

But addressing the gathering, Labor MK Erel Margalit – who praised Corbyn for the energy of the conference – said it was important to hear from the new leader an acknowledgment that Hamas undermines the Palestinian Authority and hopes for peace. Corbyn has previously described Hamas and Hezbollah as ‘friends’.

There was no reference to ongoing concerns over his links to extremists and anti-Semites but Corbyn spoke out clearly against anti-Semitism. “We have to stand against racism in all its forms – be it Islamophobia, anti-Semitism, be it far right racism,” he said. “Any kind of racism or discrimination is fundamentally wrong. The rise of the far right parties is best met by all those of us who want to live in a multicultural, multi-faith society standing together to defend that society against attacks the far right level against us in this country and Europe.”

Israel’s deputy ambassador Eitan Naeh – who thanked the party for the support it has shown over the years – said boycotts punish Palestinian workers. He added: “I call on all true friends of Israel and the Palestinians to help bring about direct negotiations, as the best and only way to achieve peace.”

Turning the refugee crisis, Corbyn offered thanks to the Jewish and other communities for “opening their hearts and their doors” to those in desperate need.

Shadow Foreign Secretary Hilary Benn, addressing the same event, struck a far warmer tone saying: “The enduring friendship between our two countries – our two people’s and our two parties – is one which will ensure over the months ahead and one to which I am very strongly committed. I want to say I big thank you to the labour friends of Israel for the work that you do.”

Benn – who backed recognition of Palestine during last year’s parliamentary vote – wanted to “see a Palestinian state so the people of Palestine can live safe and securely alongside the people of Israel living safe and securely”. And reflecting on hearing about the suffering of children on both sides during visits to Sderot and Beit Hanoun, he said: “Here are two communities living side by side separated by this conflict. What do they both want? They both want for their children to live in peace and to grow up safe and secure and to have a better life in the years ahead.”

Labor MK Michal Biran praised the shadow foreign secretary’s message but branded the new leader’s speech as “outrageous”, saying he could have shown his readiness to see things also from Israel’s perspective without compromising on his long-held positions.

She told the Jewish News: “It was Labour Friends of Israel and people came to hear about that. The only interesting thing in the speech is what was missing. The fact Corbyn did not mention Israel once suggests what we suspected and feared is accurate.”

BICOM chief executive James sorene said: “At the largest gathering of Israel supporters in the Labour Party he had the perfect opportunity to reassure people who are concerned about his support for Hamas and Hezbollah. Instead he chose not to utter the word ‘Israel’ or say anything about Israelis. It was an astonishing omission.”

But many pointed to the lack of mention of any form of boycott by Corbyn, who has previously spoken in favour of economic measures and even boycotts of universities involved in arms research . “It could have been worse,” said one Labour source, “but Jeremy’s leadership is now a reality and all our energies must go into ensuring the party doesn’t take on a boycott position.”

JLC chief executive Simon Johnson said: “We were pleased that the Labour Leader, Deputy Leader and the Shadow Foreign Secretary attended the Labour Friends of Israel reception, as has become customary in recent years. They shared a platform with the Deputy Ambassador and a Member of the Knesset. This was an indication of the Party’s willingness to continue to engage with the community”.

LFI chair Joan Ryan said: “We will continue to reiterate that the only way to ensure a two-state solution is through direct negotiation, compromise and strengthening the voices of those committed to peace and co-existence. Boycotts, violence and the delegitimisation can, and should, play no part in that process. I have written to Mr Corbyn and we seek dialogue with him. It’s essential he understands and recognises the complex realities Israel faces.”

A spokesman for Jeremy Corbyn said: “Jeremy was heckled by one person in a meeting of several hundred people and his speech was warmly received by the audience and organisers. He is looking forward to continuing to work with LFI.”