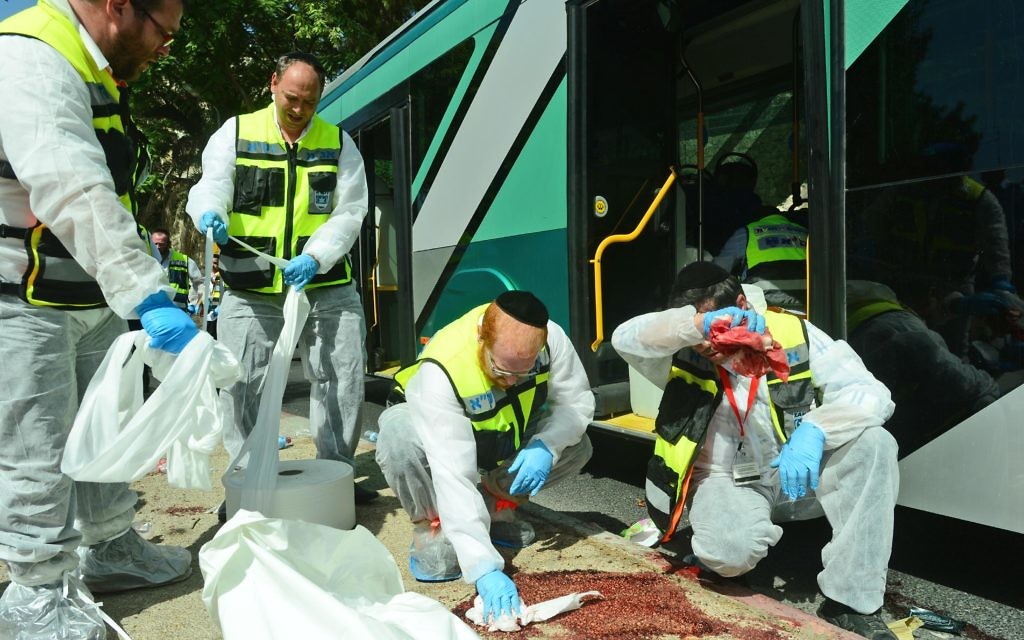 The aftermath of a terror attack in Israel

Ultra-Orthodox Jewish men gather around the body of Yeshayahu Kirshavski during his funeral in Jerusalem, Tuesday, Oct. 13, 2015. (AP Photo/Sebastian Scheiner)

The security situation in Israel went from bad to worse to unimaginable this week, as Palestinians upped their attacks on Israeli Jews in a series of ever-more shocking incidents – many of which were graphically captured on video.

Tuesday’s so-called ‘Day of Rage’ saw Palestinians use meat cleavers to hack at victims on buses and in the streets. This brings to 20 the total of stabbings this month, with eight Israelis killed and 37 people killed in total. In Jerusalem, Rabbi Yeshayahu Krishevsky, 59, was killed and several others were injured as they waited at a bus stop on Tuesday morning.

CCTV footage showed the attacker ploughing his car into the group, before getting out and stabbing those he had just injured. He was shot on-site by a security guard.

*WARNING: The following video is graphic.

Elsewhere in the capital, two attackers boarded the 78 bus in the Armon Hanatziv neighbourhood, armed with a knife and a gun. Two men aged 45 and 60 years were killed.

Among the reprisals attacks, an Israeli Jew stabbed and injured another Israeli Jew in an IKEA store near Haifa, after mistaking him for a Palestinian. The 22-year-old victim was recovering in hospital.

Two more stabbings took place within several hours of each other in the central city of Ra’anana, with several people seriously injured.

A day before, a 13-year-old Palestinian attacked Israeli Jews in a sweet shop in the capital’s Pisgat Ze’ev neighbourhood. Prime Minister Benjamin Netanyahu convened his security cabinet to agree extra measures, such as powers to confiscate attackers’ property and revoke their residency rights.

The response was criticised by Sari Bashi, director at Human Rights Watch, who said: “Exacerbating the punitive policy of home demolitions is an unlawful and ill-considered response.”

Israeli forces were bolstered by six companies of soldiers, 1,400 reserve border police and 300 extra security guards, with Palestinian areas of Jerusalem – comprising 40 percent of the city – placed in a state of lockdown on Wednesday, after protests erupted across the country, with clashes at Rachel’s Tomb in Bethlehem and the Erez Crossing.

Shops and schools in East Jerusalem and the West Bank closed on Tuesday, as Palestinians staged the first general strike in years. Jewish settlers cancelled a major rally in Jerusalem’s Paris Square for security reasons.

In the UK, Minister for the Middle East Tobias Ellwood said the Government was “extremely concerned by the violence,” adding: “We condemn the terrorist attacks in Jerusalem… We are also concerned by the use of force by Israeli security personnel in response.”

Parliamentary members of Conservative Friends of Israel this week called on the government to “tackle this Palestinian incitement,” after Israel’s Deputy Foreign Minister Tzipi Hotovely urged donor countries to the Palestinian Authority “to use their influence”.

A masked Palestinian youth carries an axe while he takes part in the funeral procession of Palestinian teenager Ahmad Sharaka, 13, (AP Photo/Nasser Nasser)

Labour Friends of Israel chair Joan Ryan wrote to the prime minister, saying: ”The brutal attacks on Israeli civilians are without justification and I would ask that you convey to the Israeli government that the British people stand with the people of Israel at this most difficult time.”

On the issue of Palestinian state-funded incitement, she added: “I am particularly concerned about the numerous examples of children’s television programmes which contain blatantly anti-Semitic language and imagery. Given the age of a number of those who have committed the current acts of terrorism, I do not believe we can discount the impact of this kind of discourse on impressionable young minds.”

By Wednesday morning, the death toll stood at eight Israeli Jews and 29 Palestinians in Israel, the West Bank and Gaza killed since Rosh Hashanah, with 12 identified by Israel as attackers. Nine Palestinians were killed in Gaza over the weekend, including a mother and her two-year-old daughter.

Up to 1,000 more Palestinians have been wounded in clashes, with Israeli forces using live rounds. A spokesman for the United Nations Relief Works Agency said 45 “incursions” by Israeli forces into refugee camps in the West Bank since 1 October had led to “several refugees being shot dead, including one child”.

The UN’s High Commissioner for Human Rights said Israel’s “excessive use of force… may be contrary to international law enforcement standards” while a Turkish government spokesman said Ankara “strongly condemns Israeli security forces’ use of disproportionate force” and blamed the violence on “Israel’s provocative and arbitrary practices which target status and holiness of the al-Haram al-Sharif [the Islamic name for Temple Mount]”.