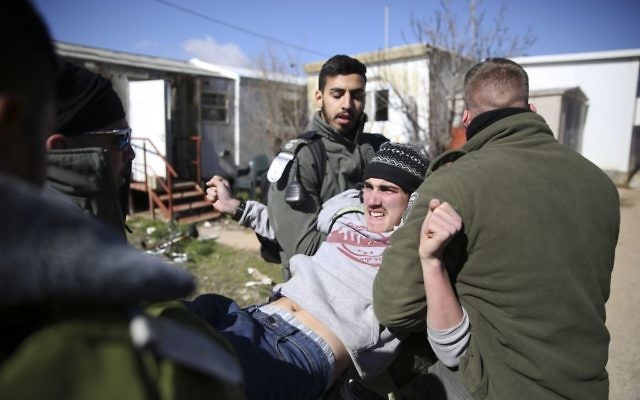 Israeli forces have begun evacuating homes in the West Bank settlement of Ofra, following a Supreme Court decision that ruled they were built on private Palestinian land.

Dozens of settlers and their supporters were protesting on the rooftops as military and police forces handed the evacuation orders to settler leaders and asked them to co-operate peacefully and avoid confrontation.

Brigadier General Yoram Sofer pleaded with the settlers “to act according to moral standards, to assist us and not to use violence”.

One of the residents defiantly tore up the order while others, mainly youths, were carried away by troops tasked with clearing the nine homes in the area. No major disturbances were reported.

The forces removed residents and hundreds of their supporters in sometimes violent clashes as they dismantled a community that had become a symbol of Jewish settler defiance.

The outpost of Amona was the largest of about 100 unauthorised outposts erected in the West Bank without formal permission but generally with tacit support from the Israeli government.

It was the scene of violent clashes between settlers and security forces during a partial demolition in 2006.

Such evacuations have created tension in the hard-line coalition of Prime Minister Benjamin Netanyahu, who has been caught between appeasing his pro-settler coalition allies and respecting the rulings issued by the Supreme Court.

The Palestinians and most of the international community consider both outposts and settlements illegal and see them as an obstacle to creating a Palestinian state.

The Palestinians want the West Bank, the Gaza Strip and east Jerusalem – territories Israel captured in the 1967 Middle East war – for their future state.

Israel withdrew its troops and settlers from Gaza in 2005, and the territory was subsequently overrun by the Hamas militant group.