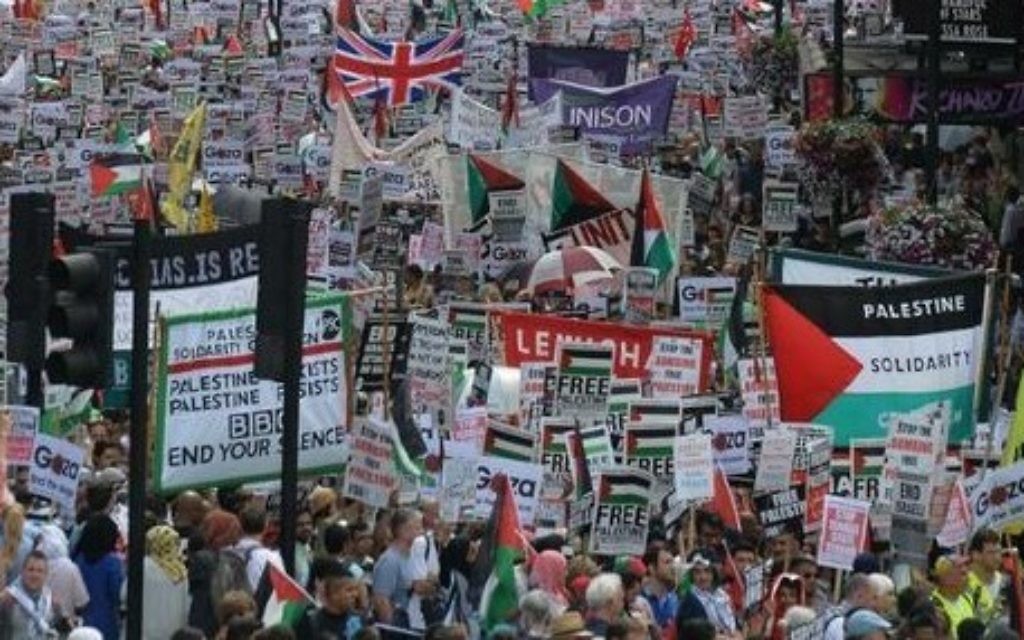 Has there ever been a motlier crew than the anti-Israel lobby?

I spent a lot of my 20s on political demos – marching against war, railing against racism, shouting about censorship – but I never once found myself rubbing shoulders with religious reactionaries, conspiracy theorists and other assorted fruit loops.

Yet on the spittle-flecked marches against Israel that have convulsed cities across Europe over the past month, you can’t swing a placard without hitting someone who might charitably be described as eccentric and, less charitably, as a nutter.

What is it about Israel that brings so many diverse dodgy people together? There are many striking things about the anti-Israel protests. There’s the fact that these protesters claim to be caring yet ignore every other war on Earth – from the shelling of Eastern Ukraine to the gutting of Syria – in favour of focusing myopically on the militarism of the Jewish state.

There’s the unhinged nature of much of the street-shouting, meaning that, from Paris to Istanbul, ostensibly anti-Israel protests have occasionally morphed into anti-Jew protests.

But perhaps the most striking thing has been the coming-together of so many different, usually clashing, political groups into one big blob of fury. It’s remarkable how so many people who would normally be at loggerheads can become united over Israel.

A Pro-Palestinian rally in London

Israel-bashing brings together both intolerant, austere Islamist outfits like Hamas and ISIS with well-to-do white people from Islington who don’t believe in God. It unites Europe’s exhausted old left and its neo-fascist right. It makes partners of youthful politicos who fancy themselves as open-minded and diehard conspiracy theorists who feverishly believe that lizards (ie, Jews) are running the world.

On an anti-Israel protest in London I saw women in burqas milling around with lefty girls in mini-skirts; Occupy-style banker-bashers walking with shouty Islamist youth; thoroughly respectable middle-class women of a certain age singing civil-rights songs alongside people of a dark conspiratorial imagination telling anyone who would listen that “the Zionists control the media and that’s why we aren’t getting the truth about the Palestinian holocaust”.

What is it about Israel that can make hard leftists and far rightists park their differences for a few hours, and encourage Britain’s supposedly tolerant middle classes to cosy up with the Arab world’s intolerant Islamists?

I think it’s that, in recent years, the Israel issue has become a magnet for misanthropes, a focal point for the free-floating fury of various political groups that have rather dark, disorientated, swirling views about the modern world and modern man.

Israel has, in essence, become a whipping boy for weirdos, the archetypal modern, progressive, cocky nation that those who dislike modernity, progress and cockiness can ostentatiously rail against.

Ask yourself what a gang like ISIS could possibly have in common with middle-class Occupy-style protesters or with David Icke-like conspiracy theorists. There’s one thing: a fear of, and a disdain for, the modern, liberal world.

ISIS wants to plunge entire communities into spartan, medieval existences, where obedience to God trumps material desire. Occupy leftists panic about economic growth, fear that consumerism has brainwashed the masses, and implore us all to exit the rat race and become self-sufficient.

Western conspiracy theorists think the modern shiny world is a façade behind which powerful bankers and Rothschilds are pulling the strings and controlling our minds.

These people might come from different parts of the world and have very different life experiences, but an underlying discomfort with 21st century life, a reactionary desire to ditch modern living in favour of low horizons, drives them all.

This also motors their fury with Israel. To them, Israel is modernity personified, the plucky, resourceful land conjured from nothing and inhabited by people who remain fairly devoted to liberal democracy and technological development (as well as by traditionally religious people, too, of course). In his book, The Israel Test, George Gilder said Israel has become a “crucial battlefield for capitalism and freedom”.

Those who support modernity will surely support Israel he says, because Israel is a “leader of human civilisation, technological progress, and scientific advance”. And those who are hostile to what Gilder calls “capitalist creativity”, who adhere to “covetous ‘fairness’ and resentment of achievement”, are more likely to be hostile to Israel, because it dares to be “free, prosperous and capitalist” at a time when those things have very much fallen out of fashion.

There’s a lot of truth in this. It isn’t Israel’s alleged crimes that infuriate so many reactionaries and pseudo-rebels in the West and East today – it is its virtues, its successes, the fact that, in many people’s eyes, it symbolises modern values such as nationhood, liberalism and progress.

The reason anti-Israel fury is so widespread, and so unanchored, is because Israel has been reduced to a conduit for the expression of some of today’s most backward, anti-human ideas.