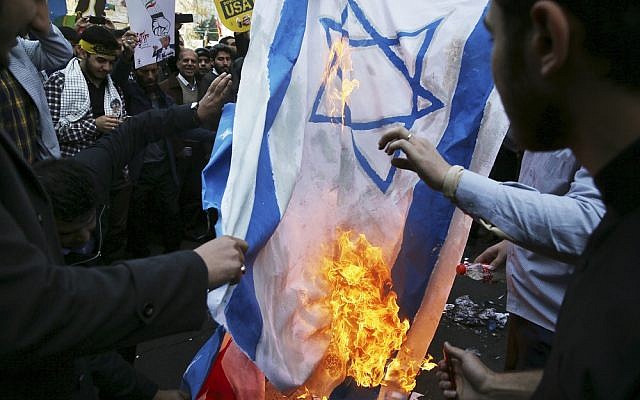 Demonstrators burn representations of Israeli and the U.S. flags during a rally in front of the former U.S. Embassy in Tehran (AP Photo/Vahid Salemi)

The owner of an Iranian factory which makes US and Israeli flags that end up being burned at protests is hoping for better relations between Tehran and Washington, despite any potential impact on his business.

Workers at the small factory in the home town of the late Ayatollah Ruhollah Khomeini diligently add all 50 stars and 13 red-and-white bars to what are supposed to be US flags, and carefully imprint the blue Star of David on Israeli ones.

They do the work even though it is destined to go up in flames.

The company, Diba Parcham Khomein, serves as a major producer for the flags constantly burned at pro-government rallies in the Islamic Republic.

Such flag-burnings are a sign of support for Iran’s clerical rulers and a throwback to the famous images of the 1979 Islamic Revolution that branded the US as Iran’s greatest foe and the “Great Satan”.

Another batch of flags is being prepared for the 41st anniversary of the Iranian revolution on Tuesday. The celebrations will take on special symbolic importance amid renewed tensions with Washington after a US drone strike in Baghdad killed Iran’s top general, Qassem Soleimani, last month.

Yet the factory’s owner, like many middle-class Iranians, holds out hopes for better relations between the US and Iran.

“I hope there is a day that the flags we produce are presented as a gift,” factory owner Abolfazl Khanjani said. 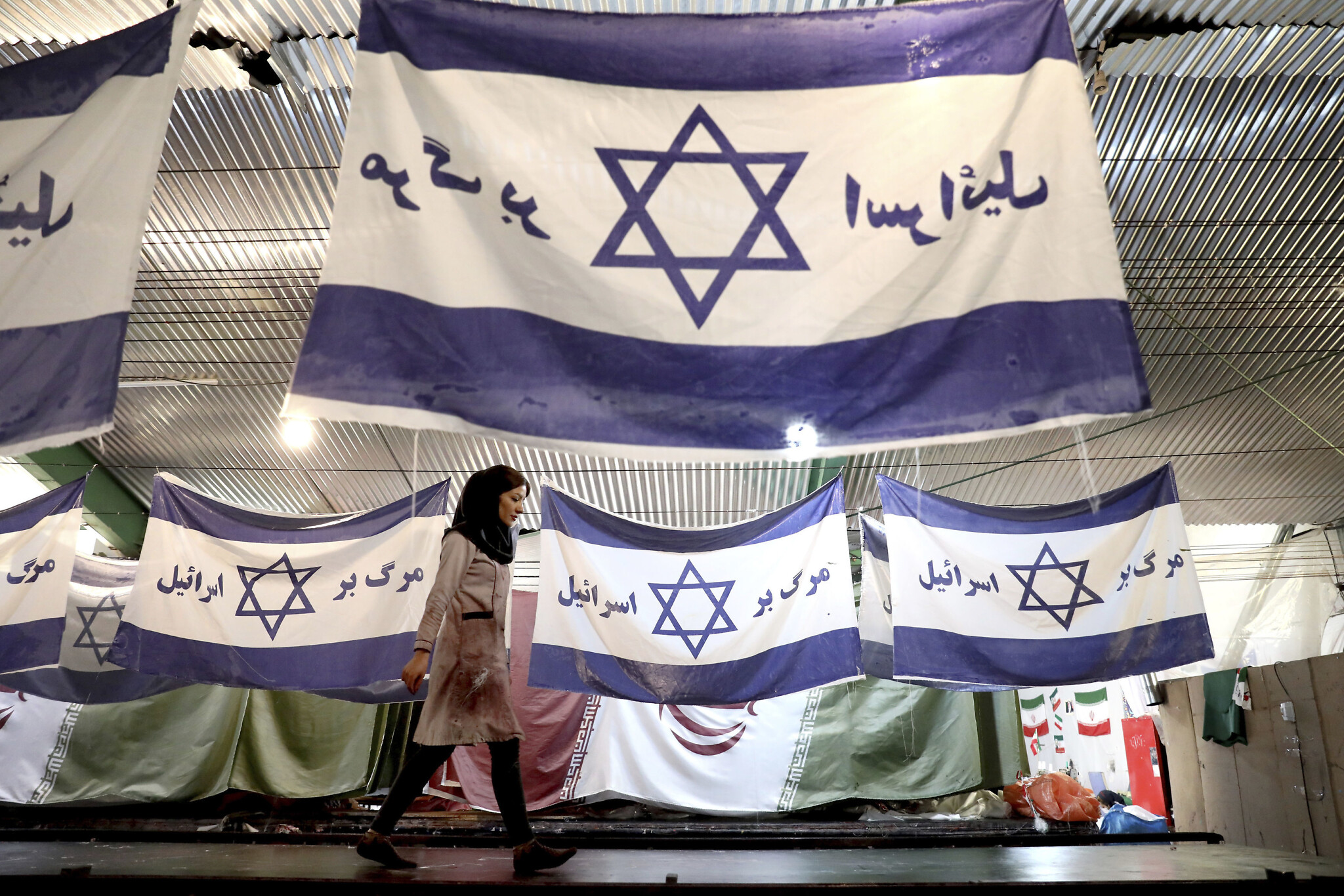 A worker walks past Israeli flags with a slogan in Persian which reads, “Death to Israel,” at the Diba Parcham Khomein factory in Heshmatieh village, a suburb of Khomein city, in central Iran. (AP Photo/Ebrahim Noroozi)

That day, however, has yet to come to Khomein, a city best known as the birthplace of the Islamic Republic’s founder.

The factory itself is in the nearby suburban village of Heshmatieh, where staff first dye the blue canton containing the 50 white stars of the American flag on linen before dyeing its seven red stripes.

The company produces 1.5 million flags a year, many bearing Islamic phrases for religious and official occasions across the country. The factory also makes Iranian flags and a small number of Iraqi national flags for export.

It makes as many as 6,000 American, British and Israeli flags in a year, all destined to be passed on to retailers. Iranian political hard-liners then purchase them to be stomped on, torn and ultimately set on fire.

“In recent years, the production of the US flags has been tripled,” Said Mr Khanjani. “What eventually happens to my products is on its end user.”

Mr Khanjani, 36, identifies himself as supporting Iranian reformist groups that want to slowly change, and open up, the Islamic Republic. But he acknowledged the anger hard-liners feel toward the US.

Tensions have been particularly high since US President Donald Trump unilaterally withdrew America from Tehran’s nuclear deal with world powers in May 2018.

In the time since, regional tensions across the Middle East have steadily worsened, leading to US drone strike in Iraq that killed General Soleimani as he was leaving Baghdad’s international airport.

Mr Khanjani said burning the American flag offered Iranians a direct way to express their anger at US policies, including the economic sanctions now choking the country.