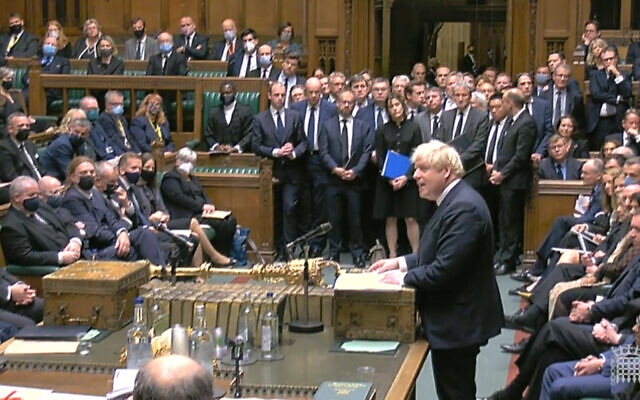 Prime Minister Boris Johnson speaks in the chamber of the House of Commons, Westminster, as MPs gather to pay tribute to Conservative MP Sir David Amess, who died on Friday after he was stabbed several times during a constituency surgery in Leigh-on-Sea, Essex.

The Conservative MP Mark Francois fought back tears as he delivered an emotional tribute in the House of Commons to Sir David Amess – his “best and oldest friend in politics” -using part of his speech to urge the government to “toughen up” proposals to counter online hate.

In a speech, delivered immediately after fitting speeches from both Boris Johnson and Sir Keir Starmer, Francois cited on-going scrutiny of the Online Harms Bill – and called for a “David’s Law” to ensure that the Southend West MP, who was stabbed to death last Friday, did not “die in vain.”

As a packed Commons chambers listened in total silence to his every word on Monday, Francois revealed Sir David had become increasingly concerned about the “vile misogynistic abuse” female MPs had to endure online.

Calling for cross party support for laws to punish the social media platforms who fail to counter online hatred, Francois added:””We may disagree sometimes passionately about how best to help people. But surely we can agree that we came here to try, for which we are now vilified, day-to-day. And I say simply enough is enough, for we all have at least one thing in common, we are legislators.

“So I humbly suggest we get on and do some legislation.” Rayleigh and Wickford MP Francois added “enough is enough” as he called for Online Harms proposals to be “toughened up” ahead of them becoming law next year. Francois also called for the possible banning of anonymous troll accounts – a move that has been called for by some MPs, including Dame Margaret Hodge. 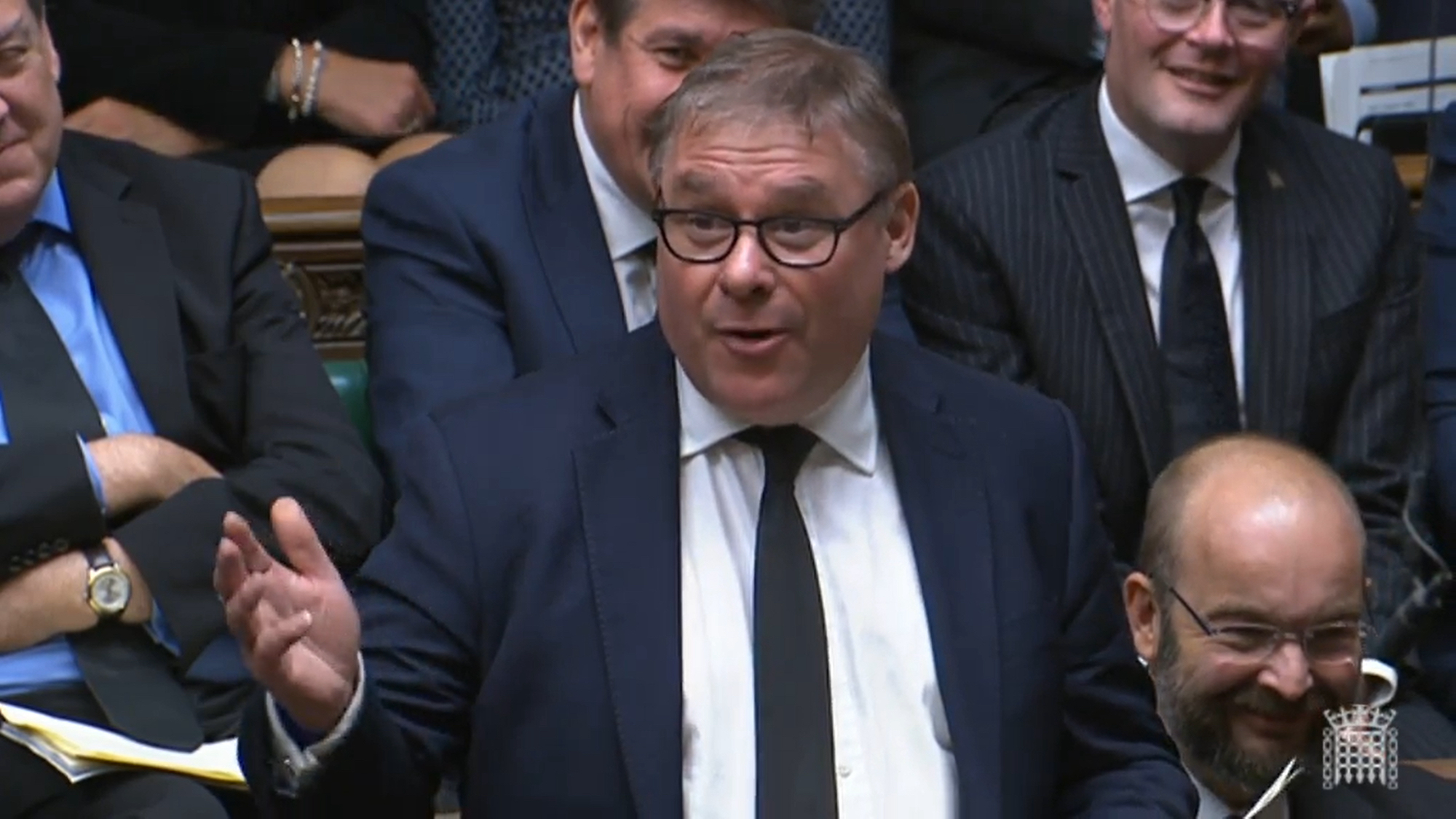 Conservative Party MP Mark Francois speaks in the chamber of the House of Commons, Westminster, as MPs gather to pay tribute to Conservative MP Sir David Amess, who died on Friday after he was stabbed several times during a constituency surgery in Leigh-on-Sea, Essex.

Many campaign groups against antisemitism will welcome the wider call for tougher regulations on online hate, as called for by Francois, who spoke next to the empty seat normally reserved for the late Sir David in the Commons.

There has been concern amongst groups such as the Antisemitism Policy Trust, as well as Labour’s shadow culture secretary Jo Stevens, that the current Online Harms proposals do not go far enough in punishing social media platforms that fail to clamp down on those who spread online hate, including anti-Jewish racism.

Using tough language, Francois told MPs on Monday that he wanted to prevent MPs, GPs and others from being “vilified” or their families being subjected ” to the most horrendous abuse, especially form people who hide behind a cloak of anonymity”.

Francois  said he was “minded to drag Mark Zuckerberg [CEO of Facebook] and Jack Dorsey [CEO of Twitter] to the bar of the house … if necessary kicking and screaming so they can look us all in the eye and account for their actions or rather their inactions that make them even richer than they already are”.

MPs had gathered inside the Commons to observe a minutes silence for the Southend West MP at 2.30pm, following tragic death last Friday afternoon. 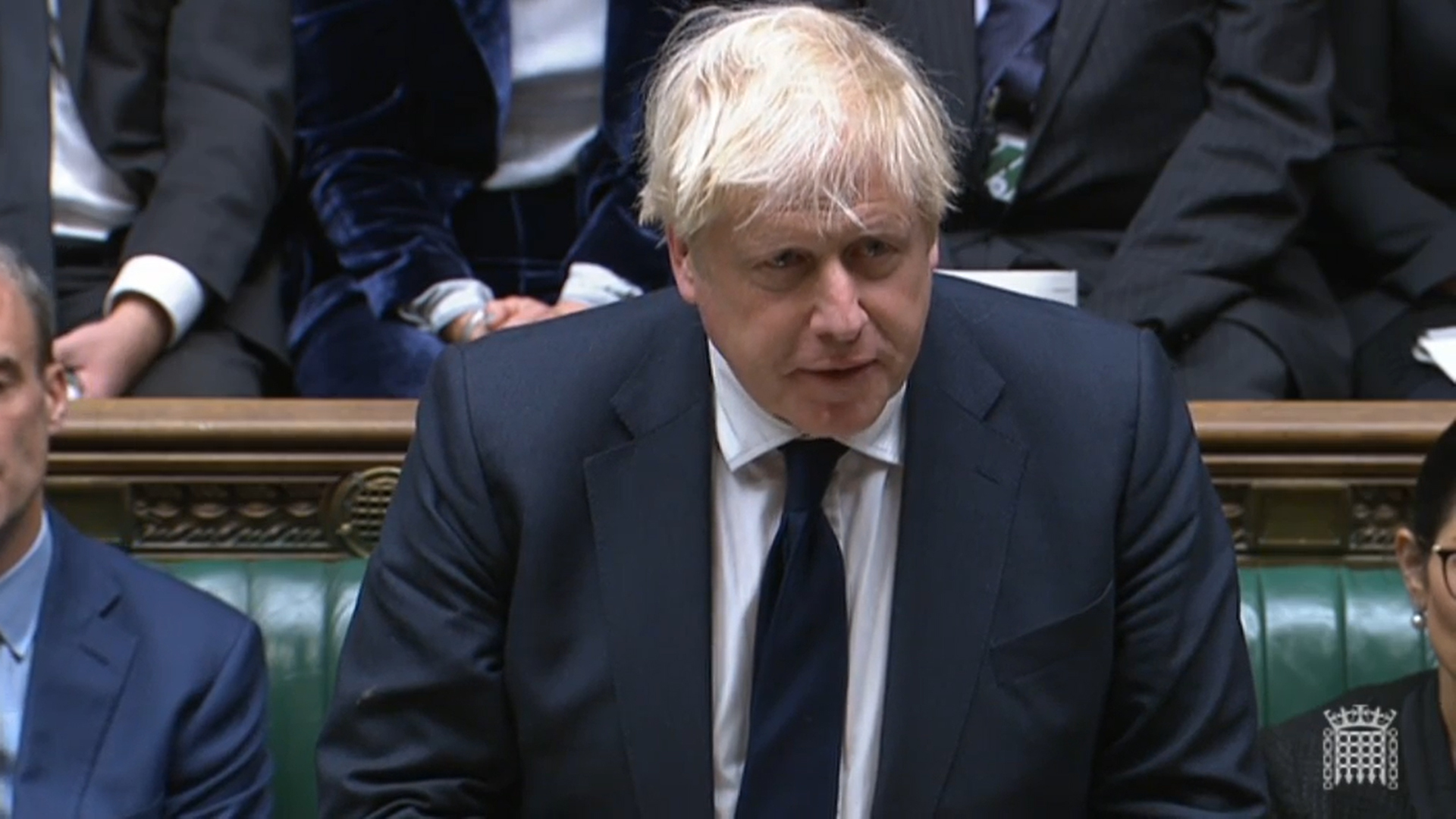 Prime Minister Boris Johnson speaks in the chamber of the House of Commons, Westminster, as MPs gather to pay tribute to Conservative MP Sir David Amess, who died on Friday after he was stabbed several times during a constituency surgery in Leigh-on-Sea, Essex.

In his own speech the Prime Minister Boris Johnson drew loud cheers as he revealed that the Queen had given approval for Southend to be granted city status – a campaign that Sir David had been a vocal supporter of during his life.

The PM also said that while his death “leaves a vacuum that will not and can never be filled, we will cherish his memory, we will celebrate his legacy and we will never allow those who commit acts of evil to triumph over the democracy and Parliament that Sir David Amess loved so much.”

Johnson added:””This House has lost a steadfast servant, we’ve lost a dear friend and colleague, and Julia and her children have lost a loving husband and devoted father. Nothing I or anyone else can say will lessen the pain, the grief, the anger they must feel at this darkest of times. We hold them in our hearts today, we mourn with them and we grieve alongside them. 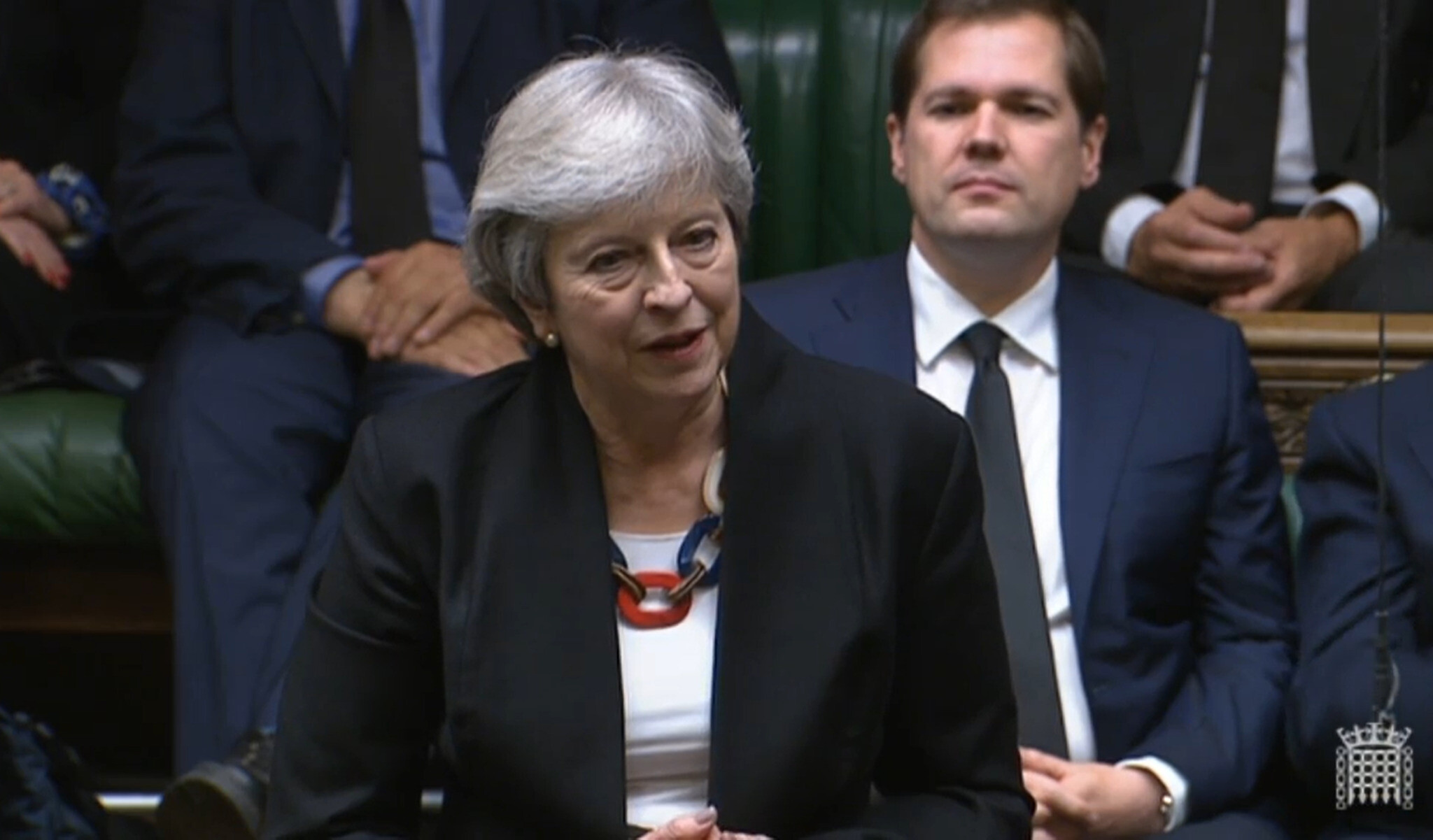 Former Prime Minister Theresa May speaks in the chamber of the House of Commons, Westminster, as MPs gather to pay tribute to Conservative MP Sir David Amess, who died on Friday after he was stabbed several times during a constituency surgery in Leigh-on-Sea, Essex.

“Sir David was taken from us in a contemptible act of violence, striking at the core of what it is to be a Member of this House and violating the sanctity both of the Church in which he was killed and the constituency surgery which is so essential to our democracy.

“But we will not allow the manner of Sir David’s death in any way to detract from his accomplishments as a politician or as a human being. Because Sir David was a patriot who believed passionately in this country, in its people, in its future.

“He was also one of the nicest, kindest, most gentle individuals ever to grace these benches – a man who used his decades of experience to offer friendship and support to members of all parties, whose views often confounded expectation and defied stereotype, and who believed not just in pointing out what was wrong with society, but in getting on and doing something about it.”

The Labour leader said Sir David was “a dedicated Parliamentarian and his loss is felt profoundly across this house. We are united in our grief at this terrible time. We are thinking of David and his family, we are thinking once again of our dear friend Jo Cox who was killed five short years ago.” 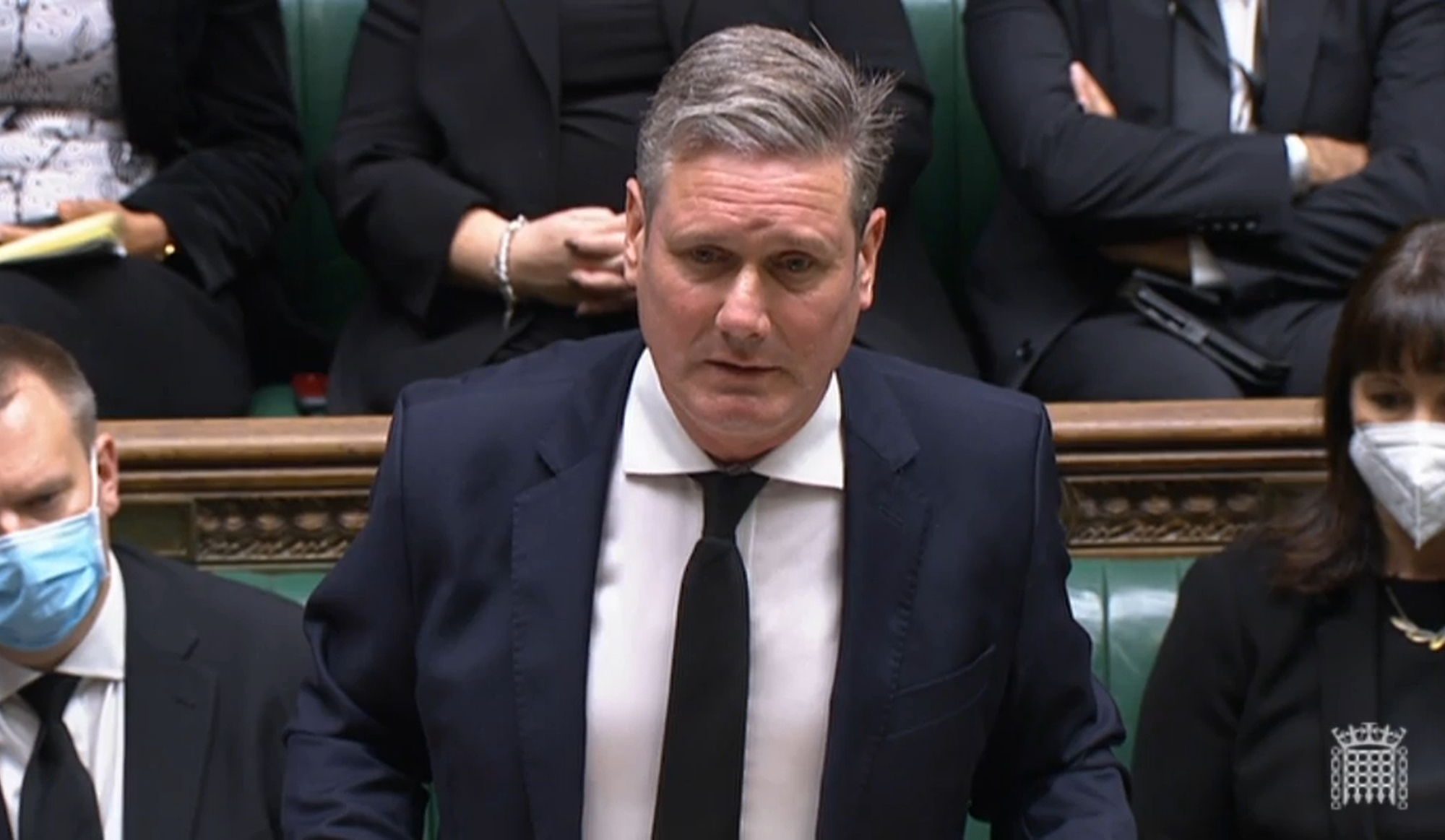 Labour Party leader Sir Keir Starmer speaks in the chamber of the House of Commons, Westminster, as MPs gather to pay tribute to Conservative MP Sir David Amess, who died on Friday after he was stabbed several times during a constituency surgery in Leigh-on-Sea, Essex.

He added: “Sir David was “a man we can all learn so much from” in that he held his beliefs “passionately but gently”.

“Civility matters and it matters in politics. A cowardly attack on a public servant doing his job is an attack on our country and our way of life. A way of life that prizes tolerance, democracy and mistake, that accepts our differences but champions our commonality.

“Let us recommit ourselves to standing for the things he stood for, the things extremists will never comprehend – for decency in our disagreements, for kindness in our hearts, for our great democracy, and for the hope that through it we can make our country and our world a better place.”

Yvette Cooper, chairman of the home affairs committee, said “every one of us” had a story of things that they worked with Sir David on.

Ms Cooper said they worked together on ensuring the safety of child refugees “and you could never predict the issue he would feel strongly about next”.

Sir Iain Duncan Smith said that in the 29 years he had known Sir David, he was “outstandingly and unfailingly kind, conscientious and generous”.

“I also remember later on when I got to know him better recalling that somebody in my constituency referred to David when he was in Basildon as ‘somebody that went always to the opening of an envelope’.

“So I put this to him, I said ‘you are accused of going to the opening of an envelope’. And he said: ‘I damn well hope so because I wrote it to them so I could go there in the first place!'”

Kim Leadbeater, the sister of the murdered MP Jo Cox and now the MP for Batley and Spen, said that while she did not know Sir David personally it has been a traumatic few days for many people. 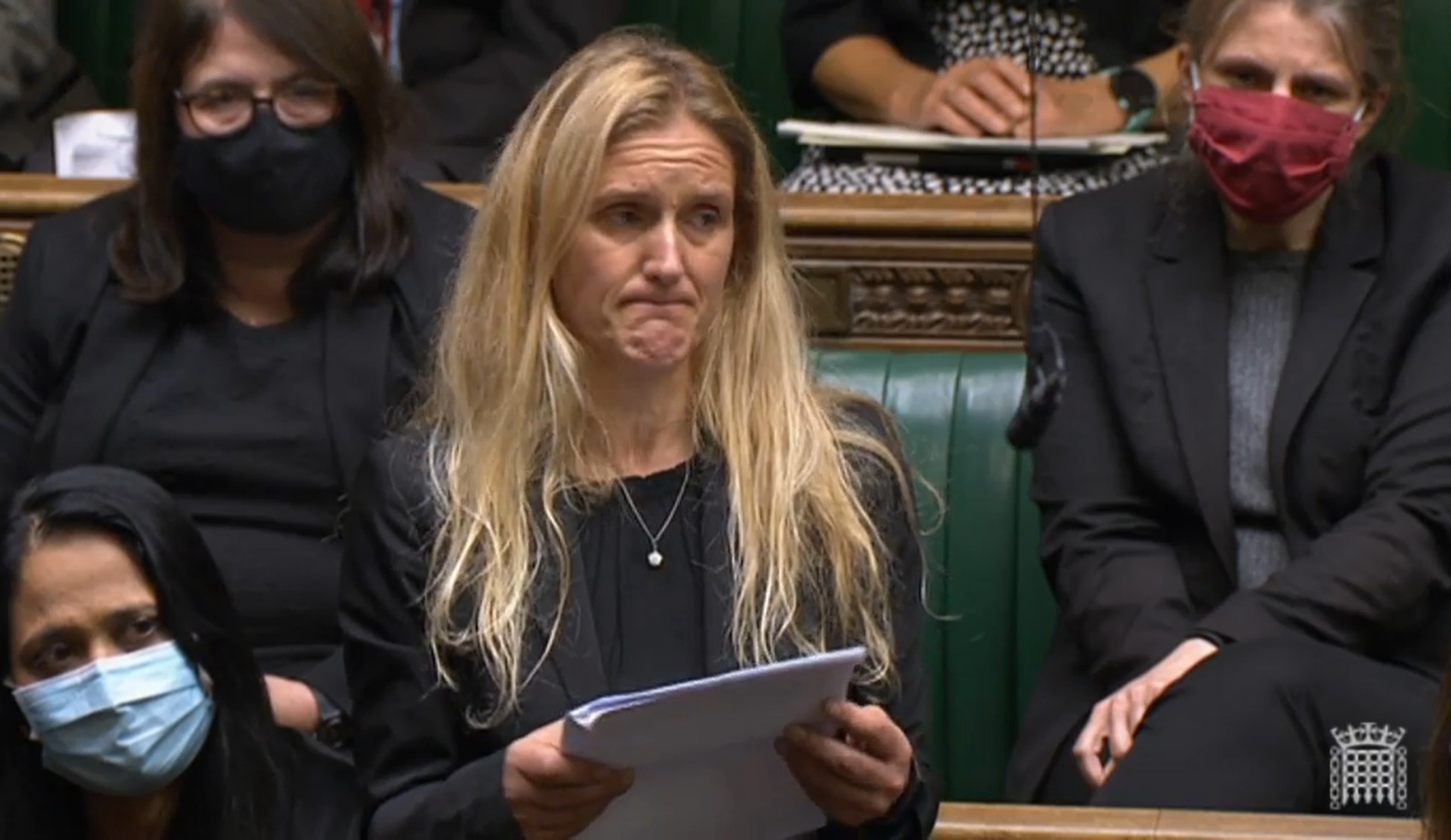 Labour Party MP Kim Leadbeater, and sister of Jo Cox, speaks in the chamber of the House of Commons, Westminster, as MPs gather to pay tribute to Conservative MP Sir David Amess, who died on Friday after he was stabbed several times during a constituency surgery in Leigh-on-Sea, Essex.

“I know from my own all-too-similar experience there is nothing anyone can say to make things right for them,” she said of the Amess family. “But nor is it right to stay silent.

Home Secretary Priti Patel and former PM Theresa May were among those to also pay touching tributes to the late MP.

Labour’s Chris Bryant remarked that while he had not got Sir David, a staunch Catholic, to support gay marriage, he had always asked after his husband when the two of them spoke to one another.