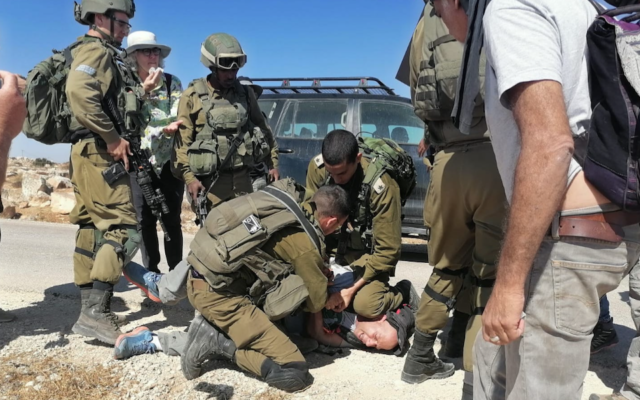 An IDF officer kneels on the neck of activist Tuly Flint in the West Bank on Sept. 17, 2021. (Courtesy of Combatants for Peace)

An officer from the Israel Defense Forces will be reprimanded after he was filmed injuring and teargassing left-wing activists in the West Bank, with one video showing him kneeling on an activist’s neck.

Multiple Israeli politicians condemned the officer’s conduct, with one defending it.

The activists were attempting to bring water to a Palestinian community in the South Hebron Hills, an area of the southern West Bank that is particularly contested. The area is under full Israeli civil and military control, and Israel has restricted Palestinian construction and access to water in the area. According to a statement from Combatants for Peace, the activists’ organisation, the military does not allow Palestinian residents access to running water, and allows them only to buy limited quantities of water on certain days.

The videos show the officer, whose identity is not known, teargassing and shoving multiple activists, including an incident in which he pushed an activist off of a road and down to the ground. Another video shows him kneeling on the neck of activist Tuly Flint.

“We didn’t resist,” Flint told the Times of Israel. “We believe in non-violence, we don’t resist agents of the law. To splay me out on the ground and choke me with a leg on my neck — it was totally redundant.”

In a statement after the incident, the IDF called the activists’ conduct a “violent demonstration” and said the protesters were blocking the road to a nearby Israeli settlement. Activists “tried to physically attack the soldiers, cursed, threatened and even lay on the wheels of the military vehicles,” the IDF said.

But on Sunday, following an investigation, the IDF announced that the officer in question would be reprimanded, according to Haaretz. The IDF said in a statement that the officer “erred and did not act in a way the situation demanded or that met the norms of the IDF.”

The military added that the decision to teargas activists and to blindfold one of them was also wrong, and that in general, the Israel Police or Border Police, rather than the IDF, should be the law enforcement entity interacting with Israeli citizens.

The videos have pit members of Israel’s ideologically fractious coalition against each other. Abir Kara, a deputy minister from Prime Minister Naftali Bennett’s party, called the left-wing activists “terror operatives״ and added, “arrest is not a pleasant thing. Good for our soldiers. Total support for commanders in the field.”

But Health Minister Nitzan Horowitz, the leader of the left-wing Meretz Party, called for an investigation and said in a statement that the activists were treated “brutally” and that “violence by soldiers against peace activists needs to stop.”

Another Meretz lawmaker, Mossi Raz, said that the military should have done more than reprimand the officer. Combatants for Peace released a similar statement.

“The decision to suffice with a reprimand of the attacking major is shameful,” Raz tweeted. “The attacked and injured protesters have been attacked again by the army, which has given its soldiers a green light to act with violence toward whoever desires peace.”

The incident occurred just about a year after another IDF officer had been filmed kneeling on the neck of a 65-year-old Palestinian activist; that activist was later convicted of incitement. In April of this year, officers of the Israel Police beat up and knelt on the face of a left-wing Jewish lawmaker.